For Immediate Release
Office of the Press Secretary
July 10, 2007

THE PRESIDENT: It's great to be in Cleveland. I've come to Cleveland to highlight a couple of important issues. First, energy independence is an important part of our nation's future. One way to achieve energy independence is to promote technologies that will enable us to drive our economy without the use of Middle Eastern oil, for example. And one such technology is hydrogen fuel cells, and GrafTech is on the leading edge of developing a technology that will work, that will be competitive with other forms of energy, and that will enable us, on the one hand, to be less dependent on oil, and better stewards of the environment. 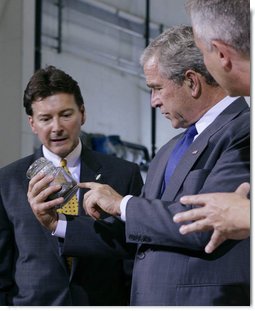 And so I'm glad to be with these entrepreneurs, these scientists, these thinkers. We've -- as part of the hydrogen fuel cell initiative that I proposed to the Congress, this company got a grant. And I think it's a wise use of taxpayers' money, to help the people in this company develop this new technology. This forklift right here is powered by a hydrogen fuel cell. Doesn't require any oil, or products derived from oil. And the exhaust from this is water.

And so we're going to continue to promote these kinds of technologies. And so I want to thank you all for having me. I'm about to go to a -- after lunch, go to a hospital to talk about the need for a health care system that is patient driven. I will resist the idea of the federal government running the health care system, and I'm going to spend some time talking during a town hall meeting about the kinds of reforms that we ought to be promoting out of Washington that encourage there to be a consumer-driven health care system. We'll take care of the poor, and we'll help the elderly. But we believe health care is best run in the private sector, not by the government.

And finally, I'm going to spend some time talking about the war on terror and our need to succeed in Iraq. And I'm going to remind the people in the audience today that troop levels will be decided by our commanders on the ground, not by political figures in Washington, D.C., and that we've got a plan to lead to victory. And I fully understand that this is a difficult war, and it's hard on the American people. But I will once again explain the consequences of failure to the American people, and I'll explain the consequences of success, as well.

And so I thank the people of Cleveland for welcoming me here. I'm glad to be in your city. Looking forward to a full day.