For Immediate Release
Office of the Press Secretary
July 3, 2007

THE PRESIDENT: Thank you very much. General, thank you very much for your hospitality. It's a true honor to come to Walter Reed to be able to see the docs and nurses, the physical therapists who are working with our wounded soldiers. The care here is remarkable. There has been some bureaucratic red-tape issues in the past that the military is working hard to cure. But when it comes time to healing broken bodies, this is a fabulous place. 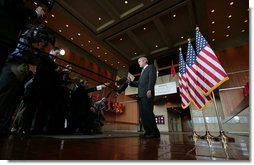 I am constantly amazed at the character and courage of those who wear our uniform. And that's no more vividly displayed than here in this place of healing. I want to thank our soldiers, sailors and Marines, airmen, Coast Guardsmen and women for their service to the country, and I thank their families. As we head into the 4th of July, we're a fortunate nation to have people who are willing to volunteer in the face of danger to help secure this country in the long run.

I'll be glad to answer two questions from you.

Q Mr. President, are you willing to rule out that you will eventually pardon Scooter Libby?

THE PRESIDENT: First of all, I had to make a very difficult decision. I weighed this decision carefully. I thought that the jury verdict should stand. I felt the punishment was severe, so I made a decision that would commute his sentence, but leave in place a serious fine and probation. As to the future, I rule nothing in or nothing out.

Q Mr. President, federal sentencing guidelines call for jail time in these kinds of cases of perjury and obstruction of justice. Why do you feel otherwise, and are you worried that this decision sends a signal that you won't go to jail if you lie to the FBI?

THE PRESIDENT: I took this decision very seriously on Mr. Libby. I considered his background, his service to the country, as well as the jury verdict. I felt like the jury verdict ought to stand, and I felt like some of the punishments that the judge determined were adequate should stand. But I felt like the 30-month sentencing was severe; made a judgment, a considered judgment that I believe is the right decision to make in this case, and I stand by it.