For Immediate Release
Office of the First Lady
June 28, 2007

MRS. BUSH: Thank you very much, Bruce. Thank you for your very kind introduction, for showing us all the great things that you've shown us today.

I want to recognize Mrs. Maureen Mwanamasa. Thank you very much. Thank you for your hospitality to your beautiful country. Also, Angela Cifire, the Deputy Minister of Sports, thank you very much for joining us today. Elisabeth Mataka, who is the Special Envoy from the United Nations Secretary General for HIV/AIDS in Africa. Also, you might be interested to you know, she's the vice chair of the Global Fund board of directors. 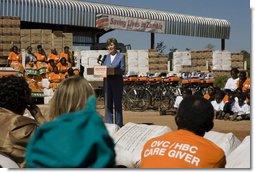 Jill Rademacher -- is Jill here? Did Jill come? I don't see her here. So we won't recognize her. (Laughter.) Martha Chilufya, thank you very, very much. Thank you for your hospitality while we're here, and thank you for your good work, your good and compassionate work.

Ambassador Mark Dybul, who is the U.S. Global AIDS coordinator, is with us. Let's see, where is he? There he is, right here on the front row. And Admiral Tim Ziemer, U.S. malaria coordinator, thank you very much, both of you, for joining me here in Zambia.

Patients, caregivers and distinguished guests, thank you very much for the warm welcome to Zambia. Zambia is a strong partner with the United States. Together, our countries are working to advance goals shared by people everywhere: improved opportunities for families, economic empowerment, and most of all, good health.

Our countries have formed partnerships to address malaria, which is a treatable and preventable disease that claims more than a million lives every year. Zambia has an ambitious national malaria control program, and through effective new medicines, and the increased use of mosquito sprays and bed nets, Zambia is making great strides against this epidemic.

These efforts are supported by the U.S. government through the President's Malaria Initiative. This five-year program has one goal: eliminating malaria in Africa. Working with Zambia's national malaria-control program, the President's Malaria Initiative will help conduct indoor residual spraying, provide life-saving bed nets and medicines, and treat pregnant women who are especially vulnerable to this disease.

Here at Mututa, patients benefit from insecticide-treated bed nets supplied through the Zambia Partnership. It's an unprecedented partnership between governments, businesses, and religious groups to reduce the suffering caused by malaria. The U.S. government supports this initiative through the President's Malaria Initiative and the President's Emergency Plan for AIDS Relief. Thirteen members of the Global Business Council have contributed over a million and a half dollars to the project. They're joined by World Vision's RAPIDS Consortium, which unites several faith institutions, including Catholic Relief Services, the Salvation Army, Expanded Church Response, CARE, and Africare.

Through the Zambian Partnership, 500,000 mosquito nets will be distributed to the country's most vulnerable households before the next malaria season in November. They'll reach about a million young children, pregnant mothers, and people infected with HIV/AIDS.

Through partnerships between Zambia and the United States, we're addressing one of the greatest humanitarian crises of all times: the challenge of HIV/AIDS. Through the President's Emergency Plan, our country has provided hundreds of millions of dollars to combat HIV/AIDS in Zambia. In partnership with the Zambia National HIV/AIDS Strategic Framework, these resources support programs that prevent mother-to-child HIV transmission, and they've supplied nearly 100,000 people with antiretroviral treatment.

Working with our government's Africa Education Initiative, PEPFAR has also provided scholarships to HIV-positive orphans and vulnerable children, helping them to stay in school and teach other children how to avoid HIV. And later today, I'll see the benefits of PEPFAR in Zambia at the Flame Community Center, where I'll meet with women participating in the WORTH program. WORTH extends micro-credit to Zambian women, empowering them to provide for themselves and their families.

Because of these partnerships, there's now great optimism to the challenge of HIV/AIDS. And one of the greatest sources of hope is the compassion of people of faith. In the United States and around the world, I've seen how houses of worship inspire volunteers with their messages of charity and hope. Millions of people have heard these messages, and they're putting their faith into practice across the continent of Africa. They've recognized that the private sector must play a role in these historic efforts.

And they know that religious institutions bring a personal, healing touch to the fight against AIDS. Their compassion is right on display here in Zambia. Later today, I'll visit Chreso Ministries, where volunteers from the Gospel Outreach Fellowship distribute antiretroviral treatments provided through PEPFAR.

And I've just come from the Regiment School, where I helped open the first PEPFAR-funded PlayPump. PlayPumps are children's merry-go-rounds attached to a water pump and a storage tank. When children play on the merry-go-round and the wheel turns, PlayPumps -- clean drinking water is produced. PlayPumps are fueled by the great limitless source of energy: children at play. And they're a great example of how governments, foundations, businesses, and religious groups have joined to address the lack of clean water across Africa, which is a major obstacle to defeating malaria and AIDS.

Here at Mututa, parents and caregivers know very well the healing power of faith. Dedicated caregivers fan out into the local communities, on bicycle and foot, to provide home-based care for chronically ill AIDS patients. Volunteers nurture orphans and vulnerable children. The center offers support groups for women victims of violence, and promotes HIV-prevention campaigns for young people, so Zambia's next generation can stay HIV free. With help from PEPFAR and RAPIDS, Mututa is helping more than 150 people live positively with HIV.

One of these people is Esnart Banda. Three years ago, Esnart didn't know she had HIV -- but she knew she was sick. Esnart suffered recurring bouts of tuberculosis, and her body was covered with sores. Her husband abandoned her, taking all of their household items with him. She struggled to care for herself, but she was too sick and weak. For two weeks she lay bed-ridden, alone and afraid. "Eventually," Ensart said, "I just accepted that I was going to die."

That's when Esnart met Leontina, a World Vision caregiver from Mututa. Leontina was in Esnart's neighborhood, going door to door, asking whether anyone needed medical attention. By chance, she happened upon Esnart. Leontina and her fellow caregivers bathed Esnart and tenderly cleaned her sores. They gave her blankets and a jacket. They encouraged her to get tested for HIV. And when she learned she was positive, they provided her with antiretroviral treatment. Soon after she went on the medicines, Esnart found the energy she hadn't felt for ages.

With money she received from Mututa, she started a business. Every night she cooks samoosas, chapat, and gamola -- Asian sweets that are very popular in her community. In the morning, she's a regular on the road to the nearby market, selling her treats. "Before, I didn't have the strength," she explains. "But now I can do whatever I need to." Her transformation, she says, "was a miracle."

Today, Esnart belongs to a support group that encourages other people in her community to get tested for HIV. Stigma remains a silent but powerful opponent in the fight against HIV/AIDS. But these women are living proof that a diagnosis is not a death sentence. Esnart and Leontina use a phrase heard increasingly throughout Africa: They speak of a "Lazarus effect," where people who once waited quietly for death celebrate a second chance at life.

These daily miracles are made possible by the partnerships that we talked about, and the compassion of people like you, and the determination of citizens throughout Zambia.

One of these determined citizens, as you've just heard, is your first lady, Mrs. Mwanawasa. (Applause.) In 2002, nearly 40 first ladies founded the Organization of African First Ladies Against AIDS to raise awareness of an issue that's too often shrouded in denial. In 2005, the first ladies launched the "Treat Every Child as Your Own" initiative, which educates adults around the world about their responsibility to protect all children from HIV/AIDS. Mrs. Mwanawasa is the chair of this group, and she's an excellent example for leaders in every nation.

In recognition of her leadership today, I'm pleased to announce that UNAIDS and the President's Emergency Plan for AIDS Relief are providing $300,000 to support the important work of the Organization of African First Ladies Against AIDS. (Applause.) This new partnership was made possible by another accomplished Zambian woman, Elisabeth Mataka, the U.N. Special Envoy for AIDS in Africa, and vice chair of the Global Fund. (Applause.) I'd like to thank Elisabeth and Mrs. Mwanawasa, and the Organization of the First Ladies of Africa for your important work. Thank you all very much. (Applause.)

And thanks to each of you for your commitment to bringing better health and renewed hope to the people of Zambian. Through initiatives like the Africa Education Initiative, the President's Malaria Initiative, and the President's Emergency Plan for AIDS Relief, the American people are proud to stand with you. They share the same goals as the citizens of this beautiful country: healthy lives today, and a more hopeful world for our children.

Recently, citizens in my country found a fun way to show their support for good health across the continent of Africa. Viewers of America's most popular TV show, American Idol, donated millions of dollars to charities that work to fight malaria and HIV/AIDS. Now -- and this is the surprise -- I'm pleased to introduce one of the American Idol finalists to perform for us. Ladies and gentlemen, Melinda Doolittle. (Applause.)