For Immediate Release
Office of the Press Secretary
June 26, 2007

I do want to thank Secretary Gutierrez and Secretary Chertoff for their hard work. And one of the things I told members of the Senate, that the administration is going to be involved in crafting a comprehensive bill that's good for the country. And I said we're going to be more than just giving speeches, or using the microphone to proclaim the need for a comprehensive bill. I would send two members plus our staff up to -- two members of my Cabinet plus our staff up to work the -- to work with the senators. 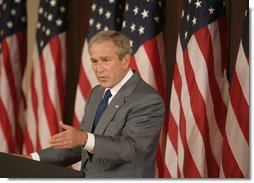 And you guys have done a really good job. Thank you for your time. Thanks for your understanding of the complex, carefully crafted piece of legislation that is moving through the Senate. And you've done exactly what I asked you to do -- that's why you're in the Cabinet. (Laughter.) I appreciate you all helping work this bill through the Senate.

The first thing that we've got to recognize in the country is that the system isn't working. The immigration system needs reform. The status quo is unacceptable. Most Americans understand that. They say, well, we attempted to reform the system in 1986, and the reform didn't work. Our view is, if the status quo is unacceptable, we need to replace it with something that is acceptable, and have been working toward that end with both Democrats and Republicans in the Senate. The reason the Senate, of course, is that we'll be moving our attention to the House when it passes a comprehensive piece of legislation.

I view this as an historic opportunity for Congress to act, for Congress to replace a system that is not working with one that we believe will work a lot better. In other words, this is a moment for people who have been elected to come together, focus on a problem, and show the American people that we can work together to fix the problem. If you dislike the status quo on immigration, then you ought to be supporting a comprehensive approach to making sure the system works.

The problem that this bill recognizes, the bill recognizes that we've got to address the problem in a comprehensive fashion. There are people who say, well, we've got to do more to protect our border -- and they're right, we do have to do more to protect our border. And that's why this bill has a lot of border security measures that will help continue the strategy that we have been implementing over the past year. As a matter of fact, there's a $4.4 billion direct deposit on enforcement measures. But it's important for our fellow citizens to understand that in order to enforce the border, there has to be a way for people to come to our country on a temporary basis to do work Americans aren't doing. Otherwise, they will continue to try to sneak in across the border. 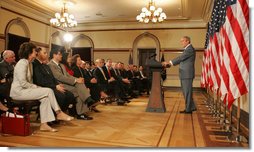 And, therefore, a second aspect of the comprehensive bill is one that addresses the economic needs of our country, and that is a temporary worker program that will match foreign workers with jobs Americans aren't doing -- and notice I say temporary worker program. There are a lot of employers here in this country that worry about having a work force that will be able to meet the demands and needs of a growing economy.

There are people who live in our neighborhood and around the world who are desperate to provide food for their families, and recognize there are available jobs, and they will do anything to come to our country to work, because they want to fight off the poverty and starvation that has affected their loved ones.

And, finally, this bill goes to the heart of our values. We have proven that our nation is capable of assimilating people. And I'm confident that we can continue to be a nation that assimilates. The bill recognizes that English is a part of the assimilation process and wants to help people learn the language in order to be able to take advantage of America.

You know, I've heard all the rhetoric -- you've heard it, too -- about how this is amnesty. Amnesty means that you've got to pay a price for having been here illegally, and this bill does that (Click here for correction). But it also recognizes it's in our nation's interest to bring people out of the shadows; that there's got to be a way forward that recognizes there is a penalty for being here illegally -- on the other hand, that recognizes that each person has got worth and dignity.

I love a country where people come with dreams and aspirations and through hard work can realize those dreams and aspirations. I'm struck every time I hear -- I'm struck about our greatness every time I hear a story about a child taking advantage of a mother's or dad's hard work to realize the blessings of America. I was at the Coast Guard Academy -- I've told this story several times -- and the number one cadet talked about his migrant grandfather. The fellow was a Mexican American -- or is a Mexican American. The father came from -- the grandfather came from Mexico to work hard so that, hopefully, some day somebody in his family would realize the blessings of America. And it worked.

The country is better off. Our soul is constantly renewed. Our spirit is invigorated when people come here and realize the blessings of America. And so the bill that we've worked hard to craft is an important piece of legislation that addresses the needs of a failed system, that says we're going to change for the better.

I want to thank you all for working hard. We've got a couple of days of hard work ahead of us to get the bill through the first stage of the process, and then, of course, when successful in the Senate, we'll be reconvening to figure out how to get the bill out of the House. It's an important piece of legislation; it's an important time to act for the sake of the country.

Thanks for your time. God bless your efforts. God bless our country. Thank you. (Applause.)