For Immediate Release
Office of the Press Secretary
June 25, 2007

Mr. President, welcome. It is a high honor to welcome President Ilves to the Oval Office. He is the President of a country which has emerged from some really dark days. And having been in Estonia, I can report to my fellow citizens that people now see the light of day, and see a better future because of the form of government that's changed. President Ilves is a very strong advocate for democracy and the marketplace, and as a result, his country is thriving and doing well. And so we welcome you. 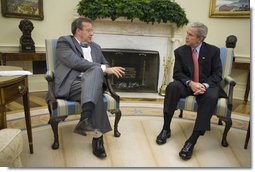 I thank you very much for your voice, heard very clearly, for those who suffer under tyrannical societies, and that is, is that freedom is a precious gift to all and that democracy and societies based upon liberty are the best way to not only enable people to realize their talents, but to lay the foundation for peace. And along these lines, Estonia has been a very strong friend to the people of Iraq and Afghanistan. These young democracies are fighting off extremists.

I briefed the President today about my conversation with the Prime Minister of Iraq, as well as our conversations with David Petraeus and Ambassador Crocker. Today, once again, we saw the brutality that extremists can inflict upon societies when a suicider killed innocent people who were working toward reconciliation. All the more reason, Mr. President, for us to remain firm and strong as we stand for this young democracy -- these young democracies.

The people of Estonia paid a high price. You lost -- I know you lost two soldiers in Afghanistan recently, and our thoughts and prayers go to the families and the people of Estonia. We thank you for your sacrifice and just want you to know that we're committed to working hard to make sure that we succeed -- and we succeed for the sake of peace for generations to come.

We talked about a lot of other interesting subjects, as well. Of course, the President pushed me very hard on visas. I readily concede there's an inconsistency in our policy where the people of Estonia are treated differently from other people inside Europe -- even though the people of Estonia are making great sacrifices for the cause of democracy and liberty alongside with U.S. forces. And to this end, Mr. President, I will continue to pursue with Congress a modernization of the visa program. I thank you for bringing it up and, frankly, I don't blame you for bringing it up.

We also talked about an interesting subject, and one that I can learn a lot about, and that is the cyber attack that makes us all vulnerable. Estonia recently went through a wave of cyber attacks. And this President, one, understands the issue well; two, has got some ideas, including a NATO center of excellence in Estonia to deal with this issue. And I really want to thank you for your leadership, and thank you for your clear understanding of the dangers that that imposes not only on your country, but mine and others, as well.

But I'm dealing with a man who is a clear thinker, he speaks with moral authority and moral clarity, and he's a voice for reason and hope around the world. And we're proud to welcome you here to the Oval Office.

PRESIDENT ILVES: Thank you very much, President Bush. It is great to be back here, to be in the United States, a strong ally of my country, a country that has been with Estonians throughout the Cold War, supporting Estonia's desires for democracy and for independence, and even in the darkest of times, and since the reestablishment of our independence, has been with us all along as a very strong partner, strong supporter of our membership in NATO; a country that, whenever things have been tough for us, has stood with us. And it's one reason why Estonia is a strong ally of the United States.

I'm grateful for President Bush's position, which I did push him hard on, on the visa issue. It is something of concern in Estonia, but I think all the other new members of NATO, the ones who are -- who have been very good allies in Iraq and in Afghanistan, and our people don't always understand why it is that those countries that have been the strongest supporters of the United States find it often the most difficult to come for vacation. But that -- I think that is an issue which is more in the hands of Congress, and we hope that Congress will resolve this.

We did, in fact, suffer a series of attacks on our computer infrastructure. It is a serious issue if your most important computer systems go down in a country like mine, where 97 percent of bank transactions are done on the Internet. When you are a highly interneted country like we are, then these kinds of attacks can do very serious damage. And I do think it's the wave of the future -- not that it's a good wave, but it is something that we have to deal with more and more.

We know that the United States and Israel and Denmark have come under cyber attack before, and I think that it's an issue that will require much more attention in the future. And I'm very happy that two countries that are very vast in terms of information technology can work together on these issues.

So I think that -- well, for me, it's been -- it's a very good visit. And I know that President Bush has a busy schedule, but I do hope that when his term in office is up, that you will come to my ranch -- which is a lot smaller than yours. (Laughter.)

PRESIDENT BUSH: Thank you all for coming.