For Immediate Release
Office of the Press Secretary
June 22, 2007

THE PRESIDENT: Please be seated. Thank you. Rachel, thank you. Thanks for coming. Thanks for the introduction, and thanks for representing the United States. Proud to have you here.

I want to welcome you all right here to the people's house. I'm pleased you could join us for this annual celebration of Black Music Month. This is an event I've always looked forward to. It's a chance to listen to some good music -- (laughter) -- and to be with some good friends. It's an opportunity for us to thank artists whose work inspire our country. And so thanks for coming. I hope you enjoy the day as much as I do. 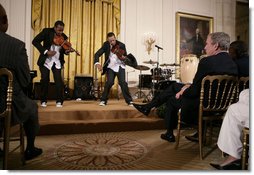 I appreciate the fact that Alphonso is with us, Alphonso Jackson and Marcia. He's the Secretary of the Department of Housing and Urban Development. Dr. Dorothy Height is with us. I'm proud you're here, Dr. Height. Thanks for joining us. (Applause.) My friend, Bob Johnson has joined us. He knows a little something about black entertainment. (Laughter.) Thanks for coming. (Applause.) Roslyn Brock, Vice Chairman of the NAACP -- I'm proud you're here, Roslyn. Thank you for coming, thank you for joining us. Dyana Williams, President of the International Association of African American Music Foundation -- she knows something about music. (Laughter.) I appreciate Kevin Liles, Executive Vice President of the Warner Music Company. Thank you for coming. And Jonathan Platt, Senior Vice President of EMI Music Publishing and Virgin Records. Appreciate you all being here. Thanks for coming. (Applause.)

Most of all, thank you all. Thanks for taking time out of your day to come. One of the best things about living here is that some of the best musicians come to play. It's amazing what kind of talent you can draw here at the White House. (Laughter.) And over the years American Presidents have seen some fantastic African American musicians here on the White House stage. President Chester Arthur -- you might remember Chester -- (laughter) -- he welcomed the first black choir to perform at the White House, the Jubilee Singers from Fisk University. President Benjamin Harrison hosted one of the first black soloists to play at the White House, Sissieretta Jones, who was the daughter of a slave.

President William Howard Taft invited Joseph Douglass -- grandson of Frederick Douglass -- to perform here. Franklin Roosevelt hosted the great Marian Anderson, when she performed "Ave Maria" for the King and Queen of England. President Ronald Reagan hosted Mikhail Gorbachev, and invited the legendary Pearl Bailey to entertain. And when he introduced her, he just simply said -- simply, "our Pearl" -- welcome "our Pearl." (Laughter.) I hope the translator got that right. (Laughter.)

And Laura and I had some incredible entertainers and Americans sing for us and our friends. We've had Eartha Kitt, Patti Austin, B.B. King, Irwin Mayfield, Aaron Neville, just to give you a taste of what happens here at the White House. Each of the performers has inspired people across the world with their talents, and each performer has brought great pride to the United States. It's really a great country that can produce a diverse group of musicians that can serve as ambassadors about what's right about America. 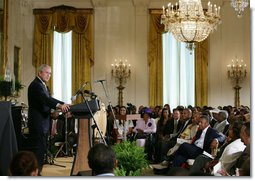 Karina Pasian grew up in New York City. She's the child of immigrants from the Dominican Republic. Her parents are both teachers in the New York Public School System, and early on it became clear that Karina had an incredible gift for music. At age 3 -- that's the definition of "early on" -- (laughter) -- she was singing and studying piano. By age 12 she was performing at the Coliseum in Rome before a television audience of more than a half-million people, alongside Alicia Keys and Stevie Wonder, and Andrea Bocelli. Today she's 15 years old. She's already recorded her first album. And despite of her young age, she tackles very mature issues with her music. She sings about hunger and disease in Africa, and the genocide in Darfur.

We're also going to welcome KEM Owens, who learned to love music growing up in Detroit listening to R&B greats. He listened to them on his mom and dad's radio. He taught himself to play piano at the home of his Baptist minister grandfather. But as a teenager, this good man lost his way. He became addicted to drugs and alcohol, and eventually he became homeless. Today he finds a home, a warm home to welcome him. He was sleeping on the ground near a building on the Detroit River, and he said this: God found him, and inspired him to set his life straight. With the help of the Almighty, he overcame his addictions, and he rediscovered his passion for music. In 2001, he used a credit card to finance the production of an independent CD he called "KEMistry". Get it, KEM Owens? (Laughter.) KEMistry? (Laughter.) 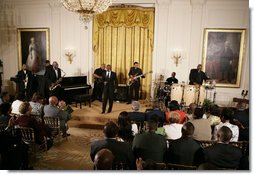 The disc sold 10,000 copies in five months. It caught the attention of music executives in New York who signed KEM to a major label deal. He has gone on to become one of America's most popular R&B singers. But he knows the audience he's truly playing for. He says, "I want my life to be one that God will be pleased with. I'm by no means a saint." I know what you're saying, KEM. (Laughter and applause.) But he went on to say, "My eye is on the prize; He's not done with me yet." We're proud to welcome such a man to the White House today.

And finally, Tourie and Damien Escobar discovered their love for the violin in the 3rd grade, and soon found themselves studying classical music at New York's finest conservatories. But they grew up in a tough neighborhood, and soon Tourie and Damien had drooped their music, dropped out of school, and fallen in with a bad crowd. Yet their mother and aunt never gave up hope. And with their encouragement and prayers, these two brothers returned to the music they loved. They formed a group called "Nuttin' But Stringz" -- performing a new music fusion that bridges classical, R&B and rap. I'm looking forward to it. (Laughter.)

They started by playing on subways, and went on to win amateur music contests at the Apollo Theater. And last month they released their first album. Here's what Tourie says: "The passion for music and the violin saved my life." And today that passion has brought these talented musicians right here to the White House.

All these artists represent the best of our country. They represent hope and hard work. We're looking forward to hearing them perform. They're going to be in a long list of performers who have come here to be able to entertain the country; to lend their musical talents to this, the people's house. I appreciate them coming to help us celebrate Black Music Month. I appreciate you all joining to help celebrate Black Music Month.

May God bless you, and may God continue to bless our country. (Applause.) 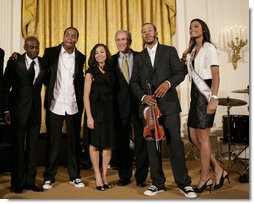 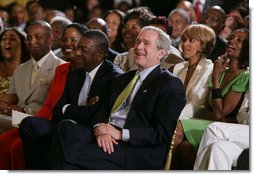