For Immediate Release
Office of the Press Secretary
June 22, 2007

PRESIDENT BUSH: Mr. President, thank you for coming. Laura and I remember very fondly our trip to your beautiful country. And I remember so very well the warm reception that we received from your government and the people of Vietnam.

I explained to the President we want to have good relations with Vietnam. And we've got good economic relations. We signed a Trade and Investment Framework Agreement. And I was impressed by the growing Vietnamese economy. 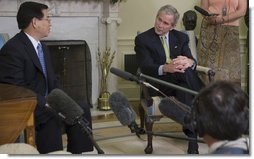 I also made it very clear that in order for relations to grow deeper that it's important for our friends to have a strong commitment to human rights and freedom and democracy. I explained my strong belief that societies are enriched when people are allowed to express themselves freely or worship freely.

I thanked the President for his continued cooperation on the issue of POWs and MIAs. I saw firsthand that cooperation when I was in Vietnam. We are now extending our search to missing remains in some of the coastal regions of Vietnam.

And I also told the President that Congress recently passed appropriations measures to help with dioxin, or Agent Orange. It has helped the people of his country. And, as well, we're firmly committed to helping Vietnam in the battle against HIV/AIDS.

And so, we welcome you, Mr. President. And thank you for the frank and candid discussion.

PRESIDENT TRIET: (As translated.) Upon the kind invitation extended to me by President Bush, I have decided to make this official visit to the United States. And I would like to thank Mr. President for your warm and kind hospitality. And also, to you, I would like to extend my thanks to the American people for their warm hospitality.

Over the last couple of days, I have had the fortunate opportunity to meet with a large number of American people and American businesses. And everywhere I went and anywhere I met, I always -- I was always extended good hospitality and cooperation.

It's very impressive that yesterday I had a chance to visit a farmer who raised grapes. And the life is very happy, and they have a warmth of feelings toward Vietnam. And the owner had to hug me several times, hesitating to say good-bye to us. And that demonstrates the desire for friendship between our two peoples.

And President Bush and I have had productive and constructive discussions. And both sides agree that our bilateral relationship has continued to develop. Especially since Mr. President's last visit to Vietnam, our relations have witnessed a new, fine development. On the economic front, our cooperation has been intensified. In addition to that, our cooperation has also intensified in other areas such as humanitarian cooperation, science, technology, education and training.

And I sincerely thank the U.S. government and people for your aid to HIV patients. And we highly appreciate the Congress appropriations for dioxin and Agent Orange victims. And I believe that the increased and good relationship between our two country [sic] would benefit not only our two countries, but also constitute a constructive factor for safeguarding peace and stability in our region.

And we have also discussed on specific measures of how to advance further our relations in a wide range of areas, be it political, economic, trade, investment, education, or training, humanitarian, et cetera. And in short, our relations are broadened, deepened on a sustainable and effective -- in a sustainable and effective manner. And as Mr. President has mentioned, both sides have just signed a Trade Investment Framework Agreement, TIFA, and many other high-value economic agreements and contracts.

Mr. President and I also had direct and open exchange of views on a matter that we may different [sic], especially on matters related to religion and human rights. And our approach is that we would increase our dialogue in order to have a better understanding of each other. And we are also determined not to let those differences afflict our overall, larger interest.

And on this occasion, I also would like to extend my warmest greetings to my fellowman living in the United States. And Vietnamese Americans are part and parcel of the Vietnamese nation. And it is my desire to see them succeed, and hope they will continue to serve as a bridge of friendship between our two countries.

And so, once again, I would like to thank Mr. President and the U.S. government and American people for your warm hospitality.