For Immediate Release
Office of the First Lady
June 21, 2007

But actually what had happened was, during his reelection in 2004, I read an article in a magazine about a boy who grew up without a father and who suffered that very profound loss that boys and girls suffer if they grow up without a parent. And this boy, young man, had a child. And so he determined that he would do everything he could to be a father to his son so that his son wouldn't have the same sense of loss that he did. 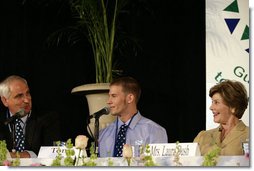 And this was a story about how he was doing this. He lived with his girlfriend, the mother of his child, and she worked during the day. And so he drove pizza delivery at night so he could be at home with his little boy during the day and his mother -- the mother of the little boy could be with him in the evening. And it was just really a story about the sort of loss that a young man faces, and then this resolve that he had to not have his son have that kind of loss.

And when I read that article, I started thinking about boys across our country. I don't think we nurture boys the way we do girls, that we think boys can take care of themselves and they're supposed to be tough, and the fact is, every living creature needs nurturing and love from their parents and from their whole society.

And so over the last two years, I've traveled to many, many programs across our country, all different kinds, programs where mentors help students perform Shakespeare, or a debate program in Atlanta, or CeaseFire Chicago, a non-violence program in Chicago, or sports programs in L.A.

And this program is, of course, exactly what we're talking about. I've been to other fatherhood programs, fatherhood initiatives, one in Kansas City, one in Milwaukee, where mentors work with young men who are fathers to help them develop a real relationship with their children, the kind of relationship they didn't have with their own fathers.

And one of the very fun things I saw at one fatherhood initiative program in Kansas was the fathers were there and their children, their one child was with them, their son or their daughter. And one of the special things they did was the 15-second hug, where the daddy hugged his child for 15 seconds. And that's such a very simple thing, but it's actually something that means the most to children everywhere, and that is to have that kind of love from their parents.

And I also want to encourage all the boys who are here, all the young men, to be the father for your children when you have them that you wanted to have. And I hope you'll do that. It will stop the cycle of fatherlessness, if you can be a father to your own children, and then they'll know what it's like to have a dad that loves them. (Applause.)