For Immediate Release
Office of the Press Secretary
June 20, 2007

THE PRESIDENT: I want to thank Congressmen Boehner, Blunt, and other leaders of the House of Representatives for coming today. We just had a discussion about how we will work together to make sure that when we spend the taxpayers' money, we do so in a way that is fiscally sound and keeps our economy growing. 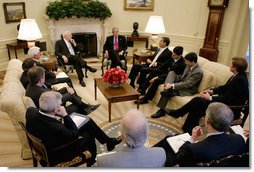 I submitted a budget to the Congress that sets priorities -- no greater priority, by the way, than defending the homeland against attack. It's a budget that keeps taxes low so the economy continues to grow. And it's a budget that will balance -- be in balance in five years.

Now, there's an alternative budget that has been presented in the Congress by the Democrats, which will increase spending by a significant amount, in our view, and will require tax raises in order to get spending. We don't think that's right for the country. We don't think that's a good way to keep the economy strong, and we think we ought to be trusting taxpayers with their own money, so they can make choices with their money.

And so, to this end, the members of Congress delivered me a letter -- 147 signatures on it that said they will support me on any veto of a bill that is -- exceeds the spending limits that we collectively think is necessary for the good of the country.

And I want to thank the members for coming. I assured them that I'm going to work with them to represent the taxpayers and the working people of the United States -- represent the small business owners that are working hard to realize their dreams and increase their payrolls. And we will be effective by working together. And I thank these leaders for coming down and spending time with us to talk about this important strategy.

Of course, we talk all the time, when you've got a common goal, which is to keep the economy strong and the nation safe. And I appreciate you working with us to achieve that objective.

Q What do you think about Bloomberg?

THE PRESIDENT: That's a fine news organization, but who do you work -- no. (Laughter.)