For Immediate Release
Office of the Press Secretary
June 19, 2007

THE PRESIDENT: Good afternoon. Welcome to the White House. I am here to say goodbye to a good friend, and introduce the newest nominee to my Cabinet. Recently Rob Portman came and told me that after 14 years of public service in Washington, he's ready to head home, to be with Jane and the family. I've known him for many years. There's no finer man in public service than Rob Portman. He's been a trusted advisor, and Laura and I are going to miss him. 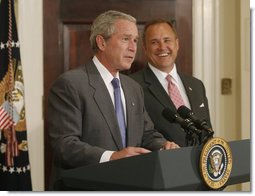 Fortunately, we found a good man to succeed him. Today I'm pleased to announce my nomination of Jim Nussle to serve as Director of the Office of Management and Budget. I'm proud to welcome Jim's wife, Karen, his mom and dad, Lori and Mark, and his mother-in-law, Eva Mae. Any man who invites his mother-in-law to a -- (laughter) -- has got to have good judgment. (Laughter.) We're going to ask a lot of Jim, and I thank you all for supporting him in this.

The job of OMB Director is one of the most important in our federal government. The Director has a central responsibility for implementing the full range of my administration's agenda, from defense programs that will keep the American people safe to energy initiatives that will break our dependence on foreign oil, to tax policies that keep our economy growing and creating jobs.

In all these areas, the OMB Director works to ensure that the American people get good value for every tax dollar they send to Washington. Jim Nussle is the right man to take on these challenges. For 16 years, Jim represented the people of Northeast Iowa in the United States Congress. As a member of Congress, Jim was a strong advocate for fiscal discipline, and a champion of tax cuts that allowed the American people to keep more of what they earn. In 2001, Jim became Chairman of the House Budget Committee. As a leader in Congress, Jim showed he can work with members of both sides of the aisle to get positive things done for America. Jim's name and knowledge command respect on Capitol Hill. And as OMB Director, he will use his expertise about the budget process to ensure that the taxpayers' money is spent with respect and with restraint.

In his new post, Jim will continue the important work carried out by Rob Portman. Over the past two years, Rob has served my administration in two important jobs. As the United States Trade Representative, Rob negotiated several new trade agreements and reenergized the Doha talks at the World Trade Organization.

And as OMB Director, he helped me achieve our goal of cutting the federal deficit in half, and doing it three years ahead of schedule. He's helped me put forward a plan to balance the budget by 2012, by restraining federal spending and keeping our taxes low. He's put Democratic leaders in Congress on notice that I will veto bills with excessive levels of spending. He has led my administration's efforts to curb the use of congressional earmarks and implement reforms that will make the earmark process more transparent. 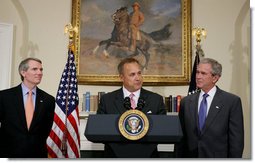 I thank Rob for his service and good advice, and, most of all, his friendship. I want to tell his wife, Jane, that after 14 years of commuting to Washington, he's going to be back home in Ohio, especially on the weekends. Rob is a tough act to follow -- but that's why I picked Jim Nussle. He's a man of integrity, a man of vision, a man well-qualified to hold this job. I ask the Senate to act quickly on his nomination. When confirmed, he'll make an outstanding OMB Director.

Congratulations to you. (Applause.)

I'd also like to thank Josh Bolten and Rob Portman. Their past work leaves me with very big shoes to fill. Josh, it's going to be great to be able to work with you again. And, Rob, I hope you're going to keep your cell phone handy, because I'm going to need to call you with a lot of questions, I'm sure.

In all seriousness, Rob, I want to thank you for your hard work, your leadership and leaving me with a fantastic team at OMB to help carry on your good work. I wish you and Jane and Jed and Will and Sally all the very best. Today really should be a celebration of your excellent example of public service, and I mean that as sincerely as I can say it.

Mr. President, I look forward to the awesome responsibility you've placed upon me. If I'm fortunate enough to be confirmed, I feel confident that my experiences in Congress and as the House Budget Chair have prepared me well for the challenges that lay ahead. I'm excited to help tackle our nation's priorities and work again with my friends and colleagues in the House and Senate.

I want to say also a few words about my home, Iowa, and also my family and the people who make up that great state. They've given me incredible opportunities throughout my life. My experience, my optimism -- and sometimes humor -- work ethic and success have all come from my family and friends and the people in Iowa, and I want to thank you for the incredible foundation that you've given me. And I'm going to need it in the coming months, I'm sure, your continued prayers and good wishes and friendship.

I want to thank my wife, Karen; my kids, Sarah and Mark; and my family, particularly my mom and dad, who are here today, Lori and Mark Nussle, and my mother-in-law, as the President mentioned, Eva Mae, who are all here today. And I truly wouldn't be standing here without your constant love and support. So thank you for that.

Mr. President, thank you for the opportunity, and I'm ready to get to work. Thank you.

DIRECTOR PORTMAN: Jim is going to need some of that Iowa humor, so if you could -- (laughter) -- that would be good.

Mr. President, first, thank you very much for your kind words and for the opportunities you've given me, and the honor to be able to serve in your Cabinet, both as the Budget Director and the Trade Negotiator. And congratulations to you, Jim.

This is a great opportunity at OMB to make a big difference. It can also be a tough job sometimes. Although my title was Director of OMB, other titles sometimes came my way -- Dr. No. (Laughter.) Tightwad. (Laughter.) Budget hawk. Penny-pincher. (Laughter.) And some not suitable for a television audience. (Laughter.)

But, actually, I want to sincerely thank my colleagues in the Cabinet. I want to thank the Chief of Staff, Josh Bolten, and my colleagues here at the White House, and also my former colleagues from the Hill, for their friendship, for their support and for the way we were able to work together to be sure we were spending the taxpayers' dollars as well as possible.

Mr. President, your leadership on fiscal matters has resulted in lower taxes, responsible spending and a growing economy. You proposed a balanced budget and others followed suit. You proposed earmark reforms, and Congress is now adopting those goals. You have shown courage by taking on the toughest budgetary challenge there is, and that's the unsustainable growth and important entitlement programs like Social Security and Medicare.

You've broken new ground in bringing more transparency and accountability to federal spending. I've enjoyed the opportunity to help you shape some of these pro-growth and fiscally responsible policies, and I very much appreciate the confidence you've shown in me to take on some tough challenges.

Some of those challenges go back to my tenure as U.S. Trade Representative, where you set an aggressive agenda to bring down global trade barriers and negotiate trade agreements with allies. We are now opening new markets, and American exports are growing twice as fast as imports. Just as I was proud to represent the United States around the world on trade, I've been very proud to promote your focus on fiscal discipline.

It's difficult to leave such important and meaningful work. But it is now time to go home to Ohio. After 14 years of commuting to Washington, D.C. from Cincinnati every week, it's now time to put my family first. I want to thank my wife, Jane, who is here today, for her love and support and patience. I want to thank my children, Jed, Will and Sally. My family has been very understanding of the intense demands and the unique rewards of public service. In many respects, as the President said when he first nominated me for USTR, they, too, are in public service.

Mr. President, as you know, I felt this was the right time to make a change so that you would have a new director in place as the new budget season begins. And you have made a terrific choice. Jim is a friend and former colleague of mine, as you said, widely respected Chairman of the House Budget Committee. He's a public servant of integrity, knowledge and skill. He knows the budget. He knows the Congress. And he knows how to get things done for the American people.

Thank you again, Mr. President, for the honor of serving you and this great nation.

THE PRESIDENT: Good job. Thank you, all.