For Immediate Release
Office of the Press Secretary
June 15, 2007

THE PRESIDENT: Gracias. Siéntese, por favor. (Applause.) Buenos días. Si. I thank my friend, Luis. This isn't the first time he's introduced me. I'm proud to be back. I thank you for the chance to come to the National Hispanic Prayer Breakfast. Appreciate the opportunity to be with Hispanic American pastors and priests and community leaders and faith-based activists from all over the United States. I thank you for coming, and thanks for having me come. I appreciate your leadership, I appreciate your compassion, and I thank you for your abiding faith in the power of prayer. 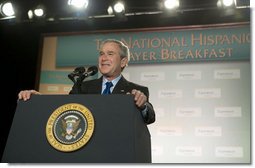 I'm pleased that two Senators who have got corazones grandes -- (laughter) -- on the immigration bill are with us today -- Senator Ted Kennedy and Senator Mel Martinez. Thank you all for coming. (Applause.)

Y también, Congresswoman Grace Napolitano y Luis Fortuno. Thank you all for coming, proud you're here. (Applause.) Thank the veterans and members of the military who are here today. I thank the pastors and community leaders.

At this breakfast we set aside our politics and come together in prayer. That's what we're doing. When we pray we acknowledge our total dependence on Almighty God. We put our future in His hands, and we find that prayer lifts our spirits and changes our lives.

This morning we have many things to pray for. We pray for our families and our loved ones and our friends. We pray for the strength and safety of our nation. We pray for wisdom and grace in times of trial. And we pray to give thanks for the many blessings that God has bestowed upon America.

Among those blessings are millions of talented men and women of Hispanic origin who call this country home. Our nation is more vibrant because of the contributions made by Hispanic Americans in all sectors of our society -- in arts, to business, to religion, to education. Our nation is more hopeful because of the Hispanic Americans who serve in the armies of compassion, who are surrounding neighbors in need who hurt with love; people who are helping to change America one heart and one soul and one conscience at a time.

Many of you at this breakfast devote your lives to serving others. By doing so, you're answering a timeless call to love your neighbor as yourself. You really represent the true strength of America, and I thank you for being of service to our country.

This prayer breakfast has come a long way since it started five years ago. We could have held it in a little tiny closet. And now, as Luis tells me, it's oversubscribed the minute it gets announced. It's a good sign for our country, isn't it? People want to come together in prayer. 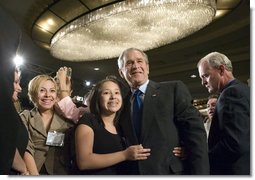 Instead of a single morning meeting, you have now come to Washington for a three-day conference. And I appreciate the chance -- you've had a chance to go to Congress and discuss your concerns with members of Congress. I appreciate your support for policies that expand home ownership. We want more Americans saying, welcome to my home, come and see my piece of property. I appreciate the fact that you're promoting small businesses. We want more Americans realizing the dream of owning their own business. And by the way, the Latino small business community is strong, and we intend to keep it that way.

I appreciate your working to raise awareness on HIV/AIDS. I appreciate you working hard to make sure every child gets a good education. Thank you for your concern for our country. You're demonstrating El Sueño Americano es para todos. (Applause.)

And I thank you for making comprehensive immigration reform your top priority. I share that priority. These Senators share that priority. I appreciate the fact that you understand that this debate can be emotional, and it's complex. I appreciate the fact that you understand that members need to hear from you about where you think this country ought to go when it comes to immigration reform. There's a lot of emotion on this issue, and it makes sense to have people from around the country come and sit down with members of Congress to talk rationally about the issue.

Our responsibilities are straightforward -- we've got to enforce the border, basic duty of a sovereign nation. We've got to create a lawful way for foreign workers to fill jobs that Americans are not doing. Our economy depends on them. And we must resolve the status of illegal immigrants already in our country without amnesty and without animosity, because that is the only practical way to fix the problem that has been decades in the making. We must help new immigrants assimilate. That's what has always made our nation strong. People in America must have confidence in this country to help people assimilate.

Mel Martinez's parents put him on an airplane because they didn't want him raised in a tyrannical society on the island of Cuba, and here he now sits as a member of the United States Senate. I was deeply touched at the Coast Guard Academy, when I was sitting there as the Commander-in-Chief of a bunch of kids who just got bars on their shoulders, and the head of the class got up to speak, and he talked about his migrant grandfather; this Hispanic American started his speech to his classmates -- because I was there, there was a lot of cameras, maybe the country -- talking about his migrant grandfather. Isn't it a fabulous country where a migrant grandfather can come and have a dream and work hard, and there's his grandson talking about the promise of America in front of the President of the United States and his classmates. That's the beauty of America. (Applause.)

We must meet our moral obligation to treat newcomers with decency and show compassion to the vulnerable and exploited, because we're called to answer both the demands of justice and the call for mercy.

Most Americans agree on these principles. And now it's time for our elected leaders in Congress to act. You don't have to worry about these two Senators; they're acting, they're in the lead. Each day our nation fails to act, the problem only grows worse. I will continue to work closely with members of both parties, to get past our differences, and pass a bill I can sign this year. (Applause.)

One of the reasons that America leads the world is that we've always welcomed people who are determined to embrace our democracy and stand for freedom. We see that determination every day in the hundreds of thousands of Hispanic Americans who wear the uniform of the United States military.

Today we're joined by a group of Hispanic American soldiers from Walter Reed Army Medical Center. I thank these brave men for stepping forward to protect our freedom. I join all of you in praying for their full recovery. And I'm honored to be their Commander-in-Chief. (Applause.)

Our nation is blessed to call these men fellow Americans. We thank God for sending us such brave and selfless people. We ask that He give His -- give us the wisdom and grace to be worthy of the sacrifices they make, and the ideals of liberty they defend.