For Immediate Release
Office of the First Lady
June 15, 2007

MRS. BUSH: Thank you very much, Mr. Kiros. Thank you for your very kind introduction. And thank you to Tokumbo and the entire Elsie Whitlow Stokes community for making me an honorary graduate of your school. (Applause.) 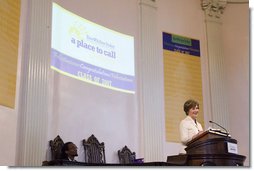 Nine years ago, your school was established to honor the legacy of Elsie Whitlow Stokes -- an Arkansas elementary-school teacher who, over the course of 36 years, helped thousands of young people become responsible, compassionate citizens. One of those young people was her daughter, Linda Moore. Linda is also the Stokes School founder and executive director. Linda. (Applause.) Every year, the sixth-grade parents give the school a plaque inscribed with the names of each graduating student. Today, this plaque will be presented to Linda by Erika Bryant. Erika also happens to be the Stokes School director of operations -- and Linda's daughter. Erika is here to celebrate the education of her graduating son, Sunny Keita -- the education that Sunny has received at the school bearing his great-grandmother's name.

Elsie, Linda, Erika, and Sunny remind us of how education is passed from one generation to the next -- by our parents, who are our first teachers. The Stokes School is supported by an outstanding group of parents. You volunteer for school activities, you help with school fund-raisers, and you chaperone field trips. In fact, parents of the Class of 2007 have been working together for so long, it's hard to say who'll miss the school more -- the students, or you. Thanks to each of you for your dedication to Stokes School. And thank you very much for the love, support, and terrific example you've given to your children.

But most of all, congratulations to the Elsie Whitlow Stokes Class of 2007. (Applause.)

At last, your journey at the Stokes School comes to an end. When you started as kindergartners back in 2000, the world was a very different place. And you were very different people. For one thing, you were much smaller people. (Laughter.) Mr. Bobby says he's measured your growth by the collection of your stuff -- which has expanded from Pokemon Cards when you were little, to the PSPs and iPods he confiscates today. (Laughter.)

Over the years and in between, you've grown into 30 accomplished and promising young people. You've built a strong academic foundation, you've indulged your love of learning, and you've developed your characters. (Laughter.) As a result, you graduate today as true "Stokes Scholars" in every sense of the word.

You've grown as scholars because of your coursework. You've mastered English, espa ol, and fran ais. In Social Studies, you've discovered ancient civilizations like the Mayans and the Egyptians, and you've confronted modern-day challenges, like immigration and international human rights. In Science Class, you learned how to make light from two potatoes. And thanks to Albi, you learned how not to make a volcano. (Laughter and applause.) When Albi said he'd leave his mark on the school forever, he meant it. (Laughter and applause.)

You've grown as scholars because of the books you've read. Every year, you celebrated the works of Dr. Seuss -- and you even tasted Green Eggs and Ham. (Laughter.) You were reminded that all families require love and understanding, in Tales of a Fourth Grade Nothing. And in the pages of Where the Red Fern Grows, two little pups helped you rediscover the importance of loyalty and hard work.

You've become scholars through the fantastic trips you've taken. In Virginia Beach, you explored the fascinating world of the oceans. In Martinique, you improved your French, and learned about geology from the island's volcanoes. You befriended local children and watched Emmanuel bring his chess skills into the international arena.

In Panama, you practiced your Spanish, you visited the presidential palace, and you went horseback riding among volcanic hot springs. Marcela was practically adopted by the Kuna Indians. (Laughter.) And everyone on the trip got tired of hearing Mr. Bobby say, "Anzhonny, take your hat off!" (Laughter.) That reminds me, Anzhonny, Mr. Bobby asked you to give me this. [Pulls out New York Yankees hat.] (Laughter and applause.)

You've become Stokes Scholars because of your outstanding teachers. (Laughter.) I know that in a recent exercise, you were asked to write your favorite memory, to write something that challenged you, and one thing you learned in each grade. And on one post-it note after another, you wrote the names of your teachers. Someone's favorite first-grade memory was "Having Miss Lobo as my teacher." For the second grade, one of you wrote: "Meeting new people like Mr. Kiros -- he's the best!" One of you wisely observed that in the third grade, "I learned not to lean on my chair, or Mr. Alfredo would pick me up with the chair." (Laughter.)

Over the years, your teachers have put up with you, cared for you, inspired you, and believed in you. Jasiel says that someday, he wants to become a pilot or an engineer because of Mr. Alfredo. According to Robert, your teachers are "good people." "We look up to them," he adds. Niya says that of all the things she'll remember about the Stokes School, "The teachers are the best part." Class of 2007, there's no better time than now to thank your teachers -- so please give them a round of applause. (Applause.)

You've become Stokes Scholars because of the lessons you've learned from each other. Your families come from across the globe -- from El Salvador, to Togo, to Albania. And with each recipe you brought in, or each family story you've shared, you've learned about many different nations and cultures.

You've taught each other other important lessons about friendship. Brandon Mustafa has done such a good job of resolving conflicts, he's got a bright future at the United Nations. (Applause.) From Harry and Aldair's sense of humor, and Kevin's wise cracks, you've learned how to make each other laugh. You learned how to be considerate from Malik's politeness, and Luther's caring. You witnessed hard work and discipline in Dahir. You learned how to be gracious, charming -- and just plain cool -- from DeJuan. (Laughter.)

You've benefitted from your friends' extraordinary talents. You enjoyed the musical abilities of Dominique and Brandi. You were treated to Xiomara's acting, when she was the Great Lion in The Wiz. You cheered Greta on the soccer field, and Gwendolyn and Ivan on the squash courts. You tried to figure out who's the fastest runner -- Ricki, or Jay. You applauded Willie's victories in school and city spelling bees. And you never imagined a person could stay undefeated at chess for so long -- until you met Norberto.

Keep taking care of yourselves. Be responsible, and treat yourself with respect. Don't let anyone discourage your dreams. Keep learning new things, and do what you love -- whether it's art, music, chess, or sports. Most important, keep investing in your education. Study hard, and do your homework. Go to college, and maybe even graduate school. And be sure to read. As Miles can tell you, there's no better place to learn and have fun than in the pages of a good book. Maybe that's why you never see him without one.

Keep caring for others. Show the same compassion to new people as you've shown to your classmates. I know that every winter, the Stokes School participates in the "Kindness and Justice Challenge." Every time you catch each other doing something kind, you tell your teachers. And at the end of two weeks, they count up all the times you've opened a door, helped with homework, or cleaned up a mess you didn't make. Stokes Scholars have been the "Kindness and Justice" champions of Washington, D.C. for the last six years. Now, remember to be kindness and justice champions everywhere you go.

Keep caring for the community. Be good stewards of our environment, as you were when you helped clean up the Potomac River at Hard Bargain Farm. And follow the example of Brandon D., the example he set on that trip, by caring for the animals -- (laughter) -- even if your animal is a cuddly pink pig. (Laughter.) Share with your neighbors in need, as you have through your Walk for the Homeless. You've made hundreds of sandwiches for Martha's Table. And in 2004, led by Tokumbo, Jay, and Oscar's efforts at Caf Asia, your class raised more than $2,000 for tsunami victims. I hope you'll always work to bring comfort and hope to people who are suffering -- whether they live right here in our city, or half a world away.

So keep these rules in mind. Someday, when you're great lawyers, politicians, writers, doctors, scientists, artists, athletes, or teachers, you can point to the strong academic and personal foundation you built at Elsie Stokes. Remember that the school is a safe place you can come home to any time you want. And remember always the people who believed in you. No matter how famous you become -- (laughter)-- the staff at Stokes School will still remember you as their students.

These teachers really care about you. Mr. Kiros came all the way back from California just to see you graduate. And if you ask him why, he'll tell you it's because he's inspired by each of you. "They have a sense of wonder about the world," he says about your class. "And they should always keep that with them."

Class of 2007, keep your sense of wonder about you, as you move on to explore the world. But before you leave, take a look around. This may be the last time you're all together as a class -- so take a minute to say good-bye to each other. As you do, you can be proud of everything you've accomplished, grateful for everything you've received, and excited about everything that awaits you. We're all very proud and excited for you.