For Immediate Release
Office of the Press Secretary
June 14, 2007

THE PRESIDENT: It's been my honor to receive General Dempsey and his wife here to the Oval Office to thank both of them for their service to the country. General Dempsey has just come out of Iraq, where he is working with the Iraqi troops to prepare for -- to prepare them for the day when they will be responsible for the security of their country. He explained to me the progress that has been made over the years that he has been there. Obviously, we have still more work to do. 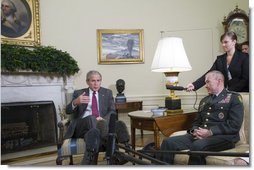 But I -- my main purpose of inviting the General here is to hear his summary, but to thank him. It's an extraordinary country where people volunteer to go into combat zones, to protect the security of the United States of America. No more important mission for our military than Iraq and Afghanistan.

And General Dempsey and his family have been very much involved in this war on terror. And we appreciate you, and thank you, and wish you all the best in your next assignment.

Thanks for being here.