For Immediate Release
Office of the First Lady
June 12, 2007 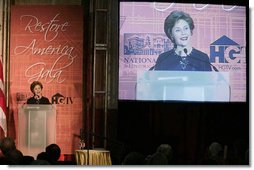 The members of Congress who are here, or at least their spouses, if they're not here, members of the diplomatic corps that have joined us, representatives from state and local government -- and I see a few representatives from Texas here in front of me -- distinguished guests, I'm delighted to be with you this evening, especially here, like Ed said, at Union Station, which is a perfect place to celebrate historic preservation.

When this transportation hub was first opened in 1907, it was the largest train station in the world. Over the last century, Union Station has housed a YWCA, a hotel, a bakery, and a bowling alley. The building has welcomed foreign dignitaries from around the world. Kings and queens were once received by U.S. presidents in the station's Presidential Suite, which today is B. Smith's Restaurant.

These halls have witnessed decades of history. But the rise of air travel, and the years of weather damage, closed the building in 1981. Congress decided that the station was worth saving -- and with help from the private sector, by 1988, trains were running again, as we could just tell, and today, all of us and 32 million visitors a year are thankful that this historic structure was preserved.

The 270,000 members of the National Trust understand the importance of places like Union Station. You know that our country's historic sites are irreplaceable, and that they're a source of pride for all Americans. Since 1949, the National Trust has advanced a broad approach to preservation, one that captures the diversity of American history. And National Trust projects have revitalized entire neighborhoods, they've restored historic sites and structures, they've conserved journals and Revolutionary War documents, and rescued steam engines and priceless works of art.

Through partnerships like Save America's Treasures, you're preserving our country's most valuable artifacts and properties. With support from the federal government -- and through the generosity of private citizens -- Save America's Treasures has awarded more than $100 million to projects in all 50 states. These grants have protected the icons of America's past -- from the Sixteenth Street Baptist Church in Birmingham, to the first airplane the Wright Brothers kept aloft in Ohio. 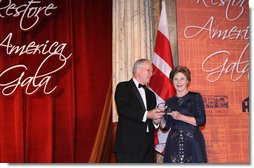 Last year, I visited the magnificent Pueblo cliff dwellings at Mesa Verde National Park in Colorado, and The Mount, Edith Wharton's home in Massachusetts. Both of these historic properties are being preserved with the help of Save America's Treasures.

President Bush and I want to ensure that our priceless historic properties throughout the nation continue to be preserved, used, and enjoyed for the benefit of future generations. That's why we started the Preserve America initiative -- to promote cultural and natural preservation, and to encourage greater appreciation of our heritage -- from monuments and buildings, to landscapes and main streets. Over the last four years, Preserve America has honored historical organizations, history teachers, and entire communities for their commitment to preservation. Over 600 communities have applied to be Preserve America Communities, and 500 have been accepted.

Save America's Treasures and Preserve America complement each other. One program provides grants to help rescue individual landmarks, and the other encourages citizens to improve access to their local treasures for the benefit of all Americans. In fact, last October, the National Trust joined with Preserve America and many other cultural organizations to host the Preserve America Summit in New Orleans.

The summit marked the 40th anniversary of the National Historic Preservation Act, which President Johnson signed in 1966. The act launched the first coordinated federal effort to safeguard our country's heritage -- and at the Preserve America Summit, we took stock of the strides we've made over the last four decades. We learned how businesses and foundations and educational institutions, governments and private citizens can increase our preservation efforts and make them more effective for the next 40 years.

Of course, many of America's historical properties -- from the African Burial Ground in New York, to the San Antonio Missions in Texas, to the White House -- are already set aside as national parks. You may be interested to know that President Bush recently introduced the Centennial Initiative to help the National Park Service -- which is a partner in Save America's Treasures -- preserve these sites. (Applause.) The initiative will invest a billion dollars in federal conservation efforts, and expand public access to the parks, in the decade leading up to the system's 100th anniversary in 2016.

The initiative's Centennial Challenge encourages the private sector to join these efforts. It calls on businesses, foundations, and citizens to match the federal contribution, and to donate another billion dollars for signature projects in the national parks. The initiative will benefit every state, so I hope that all the members of Congress will encourage your colleagues to support this, which means fund this important initiative. And I do actually think it has very strong bipartisan support. (Applause.)

One of our most important obligations, though, is to make sure that the next generation carries on this preservation work after us. Both Preserve America and the National Parks' Centennial Initiative encourage young people's love of American history and culture. Through projects like Preserve America Youth Summit and the National Parks' Junior Rangers program, these initiatives help cultivate a preservation ethic in our next generation.

I'd like to thank the National Trust for making future preservationists one of your top priorities.

We've seen the importance of getting young people involved in preservation in communities like Eads, on the southeast plains of Colorado. Since the Dust Bowl of the 1930s, this agricultural region has struggled with a harsh climate and poor soil. But Eads, Colorado, is rich in history -- and local students are using the town's past to revitalize their community.

I think this is terrific: The Eads High School Class of 2006 established a local preservation commission to review the town's historic landmarks. In their business classes, they learned how Eads could benefit from federal preservation efforts taking place nearby -- like the Sand Creek Massacre Historical Site, which was just designated our country's 391st national park. (Applause.)

In April, the six counties of the Colorado plains region -- including Kiowa County, home to Eads -- were recognized as Preserve America Communities. But the most important recognition has come from area residents themselves. As one woman explains, "Those kids have a can-do attitude, and that means a lot. It makes more of us think that maybe we've really got something worth saving."