For Immediate Release
Office of the Press Secretary
June 12, 2007 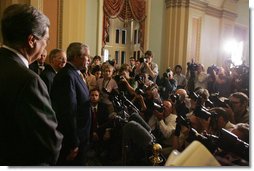 I would hope that the Senate Majority Leader has that same sense of desire to move the product that I do, or the bill that I do and these senators do, because now is the time to get it done. It's going to take a lot of hard work, a lot of effort. We've got to convince the American people that this bill is the best way to enforce our border. I believe without the bill that it's going to be harder to enforce the border. The status quo is unacceptable. I want to thank those senators on both sides of the aisle who understand the time is now to move a comprehensive piece of legislation. The White House will stay engaged.