For Immediate Release
Office of the Press Secretary
June 12, 2007

THE PRESIDENT: Thank you all for coming. Please be seated. Dr. Edwards, thanks for your kind words. Congressman Lantos -- no better friend to freedom, by the way; Congressman Rohrabacher, the same. Members of the Czech and Hungarian parliaments; ambassadors; distinguished guests; and more importantly, the survivors of Communist oppression, I'm honored to join you on this historic day. (Applause.) 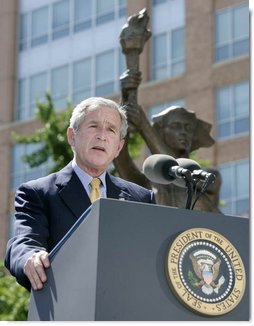 And here in the company of men and women who resisted evil and helped bring down an empire, I proudly accept the Victims of Communism Memorial on behalf of the American people. (Applause.)

The 20th century will be remembered as the deadliest century in human history. And the record of this brutal era is commemorated in memorials across this city. Yet, until now, our Nation's Capital had no monument to the victims of imperial Communism, an ideology that took the lives of an estimated 100 million innocent men, women and children. So it's fitting that we gather to remember those who perished at Communism's hands, and dedicate this memorial that will enshrine their suffering and sacrifice in the conscience of the world.

Building this memorial took more than a decade of effort, and its presence in our capital is a testament to the passion and determination of two distinguished Americans: Lev Dobriansky, whose daughter Paula is here -- (applause) -- give your dad our best. And Dr. Lee Edwards. (Applause.) They faced setbacks and challenges along the way, yet they never gave up, because in their hearts, they heard the voices of the fallen crying out: "Remember us."

These voices cry out to all, and they're legion. The sheer numbers of those killed in Communism's name are staggering, so large that a precise count is impossible. According to the best scholarly estimate, Communism took the lives of tens of millions of people in China and the Soviet Union, and millions more in North Korea, Cambodia, Africa, Afghanistan, Vietnam, Eastern Europe, and other parts of the globe.

Behind these numbers are human stories of individuals with families and dreams whose lives were cut short by men in pursuit of totalitarian power. Some of Communism's victims are well-known. They include a Swedish diplomat named Raoul Wallenberg, who saved 100,000 Jews from the Nazis, only to be arrested on Stalin's orders and sent to Moscow's Lubyanka Prison, where he disappeared without a trace. They include a Polish priest named Father Popieluszko, who made his Warsaw church a sanctuary for the Solidarity underground, and was kidnaped, and beaten, and drowned in the Vitsula by the secret police.

The sacrifices of these individuals haunt history -- and behind them are millions more who were killed in anonymity by Communism's brutal hand. They include innocent Ukrainians starved to death in Stalin's Great Famine; or Russians killed in Stalin's purges; Lithuanians and Latvians and Estonians loaded onto cattle cars and deported to Arctic death camps of Soviet Communism. They include Chinese killed in the Great Leap Forward and the Cultural Revolution; Cambodians slain in Pol Pot's Killing Fields; East Germans shot attempting to scale the Berlin Wall in order to make it to freedom; Poles massacred in the Katyn Forest; and Ethiopians slaughtered in the "Red Terror"; Miskito Indians murdered by Nicaragua's Sandinista dictatorship; and Cuban balseros who drowned escaping tyranny. We'll never know the names of all who perished, but at this sacred place, Communism's unknown victims will be consecrated to history and remembered forever. 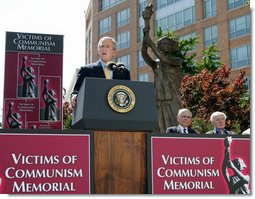 We dedicate this memorial because we have an obligation to those who died, to acknowledge their lives and honor their memory. The Czech writer Milan Kundera once described the struggle against Communism as "the struggle of memory against forgetting." Communist regimes did more than take their victims' lives; they sought to steal their humanity and erase their memory. With this memorial, we restore their humanity and we reclaim their memory. With this memorial, we say of Communism's innocent and anonymous victims, these men and women lived and they shall not be forgotten. (Applause.)

We dedicate this memorial because we have an obligation to future generations to record the crimes of the 20th century and ensure they're never repeated. In this hallowed place we recall the great lessons of the Cold War: that freedom is precious and cannot be taken for granted; that evil is real and must be confronted; and that given the chance, men commanded by harsh and hateful ideologies will commit unspeakable crimes and take the lives of millions.

It's important that we recall these lessons because the evil and hatred that inspired the death of tens of millions of people in the 20th century is still at work in the world. We saw its face on September the 11th, 2001. Like the Communists, the terrorists and radicals who attacked our nation are followers of a murderous ideology that despises freedom, crushes all dissent, has expansionist ambitions and pursues totalitarian aims. Like the Communists, our new enemies believe the innocent can be murdered to serve a radical vision. Like the Communists, our new enemies are dismissive of free peoples, claiming that those of us who live in liberty are weak and lack the resolve to defend our free way of life. And like the Communists, the followers of violent Islamic radicalism are doomed to fail. (Applause.) By remaining steadfast in freedom's cause, we will ensure that a future American President does not have to stand in a place like this and dedicate a memorial to the millions killed by the radicals and extremists of the 21st century.

We can have confidence in the power of freedom because we've seen freedom overcome tyranny and terror before. Dr. Edwards said President Reagan went to Berlin. He was clear in his statement. He said, "tear down the wall," and two years later the wall fell. And millions across Central and Eastern Europe were liberated from unspeakable oppression. It's appropriate that on the anniversary of that speech, that we dedicate a monument that reflects our confidence in freedom's power.

The men and women who designed this memorial could have chosen an image of repression for this space, a replica of the wall that once divided Berlin, or the frozen barracks of the Gulag, or a killing field littered with skulls. Instead, they chose an image of hope -- a woman holding a lamp of liberty. She reminds us of the victims of Communism, and also of the power that overcame Communism.

I thank each of you who made this memorial possible for your service in freedom's cause. I thank you for your devotion to the memory of those who lost their lives to Communist terror. May the victims of Communism rest in peace. May those who continue to suffer under Communism find their freedom. And may the God who gave us liberty bless this great memorial and all who come to visit her.