For Immediate Release
Office of the First Lady
June 11, 2007

MRS. BUSH: Thank you all very much, and thank you so much, Mrs. Parvanova, appreciate it very much for your warm welcome to your beautiful country and to the historic city of Sofia. 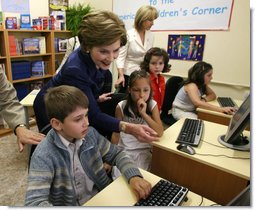 Mr. Belchev, thank you so much for letting us join you today. I want to recognize Jocelyn Greene, our ambassador's wife, the wife of the United States ambassador to Bulgaria. Mrs. Mihaylova is here. Where is she? Right there. Thank you very much. She's the Deputy Minister, Regional Development and Public Works, and former director, project director of the America-Bulgarian Library Exchange.

Mr. Igor Chipev, head of the Department of Books and Libraries, Ministry of Culture, thank you for joining us, as well. Mrs. Grashkina, the President of the Bulgarian Library Association. And I hope you have a chance to also meet with people in the American Library Association, which is a very active association, as you know.

This project began a couple of years ago when Mrs. Parvanova asked me to bring the cultural resources available in other American Corners in Bulgaria to the library here in Sofia. Now, in partnership with the United States embassy, the Sofia City Library will serve as a source of information about the United States of America.

The Corner will also feature six computers, which patrons can use to learn about American sports and music and other activities. In fact, many of the books that are in the library are our family favorites that President Bush and I read to our children when they were babies, or that our mothers read to us when we were young, classics of American children's literature.

The American Corner will also house one of the three-book reference sets the embassy is donating to 100 public libraries throughout Bulgaria. These are National Geographic sets; they're guides to the American states, Presidents and history. They're easy to read and they contain lots of maps and photographs and illustrations, and I think they'll be a great asset for Bulgarian children and adults looking to increase their knowledge about the United States.

The American Corner is a part of an exchange between our countries through the American-Bulgarian Library Exchange program, as American libraries in Colorado, Maryland and Iowa now have collections of books about Bulgarian culture, history and cuisine. These libraries organize "Bulgaria Days" and other events to teach Americans about what life is like here in Bulgaria.

Library visits and reading are great ways for young people to develop new interests, to perform better in school, and to have fun. But the benefits of reading extend far beyond the library. As the people of Sofia know very well, reading and being able to learn and discuss ideas freely is a basic requirement for healthy, democratic societies.

The United States and Bulgaria are allies and friends because our countries both treasure this freedom, and we share a deep love of learning. Around the world, though, more than 800 million people cannot read. Almost 100 million of them are children, and almost two-thirds of them are women.

Developed countries with high literacy rates, like Bulgaria and the United States, share a responsibility to increase literacy in the world's developing countries. To help governments ensure that children and adults in their countries know how to read, a White House Conference on Global Literacy was held last September in New York at the time of the U.N. General Assembly. The conference was held in partnership with several government agencies and UNESCO. UNESCO is now building on this event with a series of regional literacy conferences around the world. The first conference took place in Qatar this past March, and was a great success. Over the next two years, UNESCO will host follow-up literacy conferences in China, Mali, India and Costa Rica, with an effort to reach people and governments all over the world to make sure people are educated all over the world.

The White House Conference and all of the regional conferences provide a forum for U.N. members to examine literacy programs that work and to learn how to implement them in their countries. I'd like to thank Mrs. Parvanova for participating in the White House Conference on Global Literacy, and I'd like to thank the people of Bulgaria for your country's contributions to this international effort.

Thanks to each of you for welcoming me to Sofia. I look forward to the new ties of friendship that will form between Bulgaria and the United States as a result of this American Corner. I hope you'll enjoy learning more about the United States through this addition to the Sofia Library.