For Immediate Release
Office of the Press Secretary
June 8, 2007

PRESIDENT KACZYNSKI: (As translated.) Good evening, ladies and gentlemen. I would like to welcome everybody to the meeting between President Kaczynski and President Bush.

The talks have been longer than expected, yes. Mr. President, ladies and gentlemen, we have had a longer meeting with President George W. Bush, and the subject of the conversation were the issues of interest to the United States of America and for Poland, our country.

I can tell you that as far as the missile defense system is concerned, the two parties fully agree. And this is in line with the obvious thing, that the system has no aggressive intentions. This is the plan which is to reenforce the protection of Europe against the dangers which result from the fact that not all the countries of the contemporary world are responsible -- we do not mean Russia here. It's about other states.

As far as relations with our Russian partner are concerned, well, we agree that Russia is an important country in the world and that the status of Russia, which is very extensive territorally, and is also very numerous in terms of population, and it has nuclear capability, which is the legacy from the previous period -- that all these factors give Russia basis for being a country important in the world, a country which really is very important. And the United States and Poland do not question that situation.

However, it is important that our Russian partner, with which Poland wants also to have as good relations as possible -- the United States has good relations with that country -- but that Russia should recognize that the world has changed for the last 18 years, and it concerns also Central and Eastern Europe, and in particular, it concerns our country.

No plans of the United States, as the U.S. President said, or Polish plans are directed against the interests of the Russian Federation. The Russian Federation can feel totally safe, at least from the respective of our countries, although there are some other larger states -- large states in the world, and some other entities are responsible for those states. However, the whole plan of the missile defense system is the plan which gives rights to more stability and defense, defense which is needed to guard against irresponsible actions, without any additional objectives here.

However, as far as other uses are concerned which were subjects to our talk, I introduced what I know about the issues related to the Western Balkans, because it is known that not long ago there was a meeting in Brussels, where I talked with almost all the leaders of the Western Balkan states. We talked also about Kosovo, the crucial problem there. We talked also about how, in Polish opinion, the solution pertaining to that region, formerly, the part of Serbia, however, in reality, it is a separate identity and how the relations pertaining to that region can be really reflected on other parts of the world. 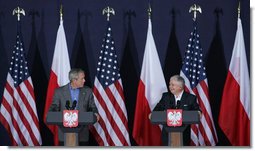 We also talked about the stabilizing role of NATO today, and I hope that tomorrow, to an even larger extent. We also talked a little about the European Union. We talked about the states with which the United States is befriended and Poland is befriended. For example, the German Federal Republic. We also exchanged views on France. President George W. Bush had already had a chance to talk longer with President Sarkozy during the meeting of G8, and I had only a brief encounter with him two years ago when I was not President yet. But in two days time I'm going to meet him.

The conversation which we have had, very interesting, important for myself at least. I'm sure it will be followed up another meeting in mid-July. And then we will come to concrete results. The beginning of that was the meeting today, very fruitful for myself. And I want to thank you very much, Mr. President, for coming to Poland. Thank you. Thank you very much.

PRESIDENT BUSH: Mr. President, thank you for your gracious hospitality. Laura and I are so honored to be with you and Mrs. Kaczynska. I think probably the highlight was to meet your granddaughter. And congratulations on the birth of another granddaughter.

This is our third trip to Poland. We have never been in this beautiful part of your country, and it's spectacular. We really thank you for inviting us to Jurata. Thank you for the walk in the woods. And thank you for the very friendly and important dialogue we had.

The President talked a lot about what we talked about. One thing I do want to do is praise this good country for being so strong for freedom. I love to be in a land where people value liberty, and are willing to help others realize the blessings of liberty. Kosciuszko is a statue right across the street from the White House, on which it says, "For our freedom and yours." Isn't that interesting? For our freedom, and somebody else's. Poland is a great advocate for democracy in the world today.

And I thank you, Mr. President, for your leadership in the cause of freedom. You're very much involved in the cause of freedom in two very difficult theaters: Afghanistan and Iraq. I thank you and I thank the people of Poland for the sacrifices they made so that others may live in a free society. You've deployed nearly 900 troops in Iraq, troops that are helping the Iraqi people defend their young democracy against extremists, radicals who murder in the name of an ideology to deny people the right to live in a free society. And I thank you for the leadership. I appreciate the fact that you've made the decision to extend the deployment through 2007. That is a bold and hard decision, I know. The people of Iraq will never forget it.

And it's important for those families who have lost a loved one in the Iraq theater to understand the American people won't forget it, either. And we send our prayers and blessings to those families.

Recently, in Afghanistan, there was a call for more NATO help, and this government stepped up quickly by sending more troops to help that young democracy survive, as well. So, Mr. President, thank you for your leadership. It's a proud moment in history when free countries are able to help others.

That's how you -- that's how you set the stage for peace. Free societies don't war with each other. That's why Europe is now whole, free, and at peace. Our dream is the same blessings of liberty be extended to the Middle East. I thank you for your stalwart support.

We discussed, as well, the efforts by Poland to help people who are -- need to be free from governments that are -- darken their vision. I thank you very much for your leadership for Belarus, the people of Belarus, a nation where peaceful protestors are beaten and opposition leaders are disappeared.

I appreciate so very much your speaking out on behalf of the dissidents in Cuba -- an island right off our coast, as you know, Mr. President, and it is inspiring for the people of Cuba who want to live in a free society to hear the voices from Europe, such as yours or the Czech Republic's.

First, let me say I appreciate the support of the deployment of the missile defense interceptors here in Poland. We will negotiate a fair agreement that enhances the security of Poland, and the security of the entire continent against rogue regimes who might be willing to try to blackmail free nations. That's the true threat of the 21st century. It's a subject that I told you I discussed with President Putin. 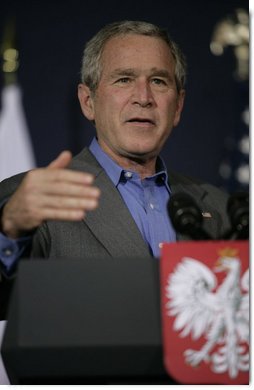 I have made clear what you just made clear, Mr. President, the system we have proposed is not directed at Russia. Indeed, we would welcome Russian cooperation on missile defense. We think it makes sense to have a -- and I proposed, and he accepted, a working group from our State Department, Defense Department and military, to discuss different opportunities and different options, all aimed at providing protection for people from rogue regimes who might be in a position to either blackmail and/or attack those of us who live in free societies.

All in all, we had the kind of conversation you'd expect strong allies to have. It was candid, it was over a really good meal, and I'm looking forward to bringing you back, Mr. President, to the White House. I can't wait to see you there in mid-July. Again, thank you all for your wonderful hospitality. God bless the people of Poland.