For Immediate Release
Office of the Press Secretary
June 6, 2007

CHANCELLOR MERKEL: (As translated.) Ladies and gentlemen, this was our first meeting here during the G8 meeting with the President of the United States of America. And we wanted to use this meeting in order to prepare the agenda of all of the issues that we're going to discuss here during the summit meeting. And it was a very satisfactory meeting, indeed, although in some areas there remain a few things here and there that we still need to discuss. 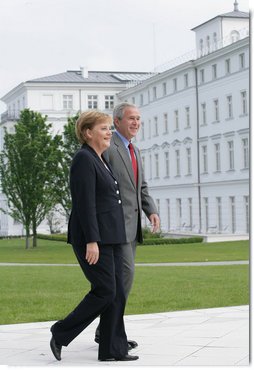 There are two priority issues that loom large on the agenda and could be seen and be also in the preparatory phase leading up to this meeting. The first one is climate change, and the second one, combating poverty in Africa. And on these two issues we just had a very intensive and a very good conversation, a very good debate. As I said, there are few areas here and there we will continue to work on, but I trust that we will work out joint positions on that.

So let me say yet again I do hope and trust that a very strong message will come out of this summit meeting, and we started here on a very good footing, indeed.

PRESIDENT BUSH: Angela, thank you for your hospitality. You picked a beautiful site.

I'm appreciative of your leadership. I think that when people take an objective look at what's been accomplished here, people see that there's been major progress made on key issues. I come with a deep desire to make sure that those suffering from HIV/AIDS on the continent of Africa know that they'll get help from the G8. I come with a deep desire to work with people around the table to reduce malaria on the continent of Africa, and feed the hungry -- I know you share that desire, as well. Thank you for your leadership.

I also come with a strong desire to work with you on a post-Kyoto agreement about how we can achieve major objectives. One, of course, is the reduction of greenhouse gases. Another is to become more energy independent -- in our case, from crude oil from parts of the world where we've got some friends, and sometimes we don't have friends. We have a good chance to share our technologies with the developing world to make sure that we're good stewards of the environment. And I thank you for your leadership on this issue, and I'm looking forward to working with our fellow G8 members.

It's good to be back in this part of the world. I know it takes a lot of hard work to put on one of these G8s, and your team has done a fine job. Glad to be with you.