For Immediate Release
OFFICE OF THE PRESS SECRETARY
June 6, 2007 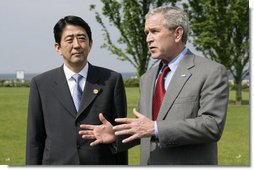 Likewise, we had an extensive discussion about energy and climate change. I reminded the Prime Minister that his great country and great economy is going to lead the way when it comes -- along with the United States, in leading the way coming to develop technologies that will enable us to be -- change our energy habits, and at the same time be good stewards of the environment. And we discussed ways to develop a framework that has the flexibility, and at the same time, the goals so we can encourage the world to move in that direction.

It's good to be with a friend.

PRIME MINISTER ABE: (As translated.) This is the sixth time that I'm having discussions with George, and as we always do, this time we were able to have a very frank exchange of views on many things. On North Korea, unfortunately, the North Koreans have not done anything to implement the initial actions. And also on the issue of abduction, they have not taken any sincere actions to resolve that issue. So we agreed that the G8 leaders need to send a strong message to North Korea on these issues. And also on the abduction issue, I explained the Japanese position to George once again, and I was able to gain his understanding on this issue, as he has always shown understanding.

On climate change, I explained the Japanese proposal to the President, and we agreed that Japan and the United States would be working together for the creation of an effective framework which is flexible, and that we would be cooperating to achieve that end in the future.

We reconfirmed the fact that the alliance we have between Japan and the United States in dealing with issues like North Korea and climate change is truly an alliance for Asia and an alliance for the entire world, for that matter.

PRESIDENT BUSH: Thank you, sir. Thank you all very much.