For Immediate Release
Office of the Press Secretary
May 31, 2007

PRESIDENT BUSH: It is my honor to welcome the President of a free Iraq back to the Oval Office. President Talabani, thank you for coming. I admire your courage. I admire your dedication to a united Iraq. I admire the leadership you have shown, and I welcome you.

We had a good conversation today about a variety of subjects. I told the President that I'm fully committed to helping the Iraqi government achieve important objectives, we call them benchmarks, political law necessary to show the Iraqi citizens that there is a unified government willing to work on the interest of all people. 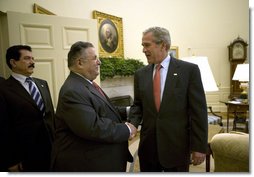 The President fully understands the need for the Iraqi government to meet certain benchmarks, and he is dedicated to achieving those benchmarks. We're working very hard, for example, on getting an oil law with an oil revenue-sharing code that will help unite the country. Working very hard on de-Baathification law -- reform, as well as provincial elections.

We talked about a lot of issues.

And I want to thank you very much for your vision, Mr. President, and your willingness to take the hard steps necessary to get the job done.

I told the President the decision I have made -- I've asked one of my top aides, Meghan O'Sullivan, to return to Baghdad. Meghan has been a integral part of our team here at the White House. She has been in Iraq before. She's going back to serve with Ambassador Crocker, to help the Iraqis -- and to help the Embassy help the Iraqis -- meet the benchmarks that the Congress and the President expect to get passed. I want to thank Meghan for her dedicated service to a free Iraq.

Mr. President, it is important that you succeed. Failure in Iraq would endanger the American citizens because failure in Iraq would embolden the enemies of a free Iraq. David Petraeus said, public enemy number one in Iraq is al Qaeda. Al Qaeda happens to be public enemy number one in America, too. And that should say loud and clear to citizens who still remember the lessons of September the 11th that it's in our interest to help the Iraqis defeat al Qaeda.

We must not let al Qaeda have a safe haven in Iraq. We must not retreat in the face of the unspeakable violence that they perpetuate on your citizens. We must help you prevail. And if all Iraqis showed the same courage you show, we will prevail. And there's a lot of courageous Iraqis there.

I'm confident we can succeed, Mr. President, and I want to thank you for coming here to the White House to join me.

PRESIDENT TALABANI: It is an honor meeting our great friend, who we consider the hero of liberating Iraq, President George Bush, who was always with Iraqi people. Also I must tell you that I'm committed as the President of Iraq to benchmarks and to do our best to achieve some progress forward for national reconciliation, for passing the law -- oil law, de-Baathification, and investment, and other laws which are now under discussion. And I think we are due to finish all of these and send it to parliament to be achieved. 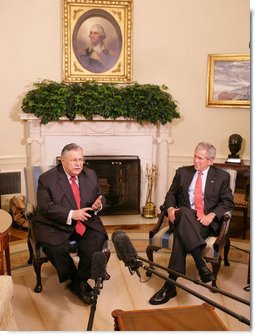 At the same time, we are committed to do our best to train our army and our forces to replace gradually the American forces in taking responsibility of the security of our country. Of course, we are very grateful to the American people. And I present my condolences to the sacrifice which these glorious people America has always presented for liberating peoples all over -- (inaudible) -- and for Iraqi people and others.

We are always committing our desire to strengthen the unity of Iraq and the unity of the national government, to have the collective leadership in Iraq for getting the oil problem. And I briefed his excellency, Mr. President, about what we have done and what we have achieved for this purpose.

So we are determined to success. Of course, you have problems. I don't think that everything is okay, everything is good, we have no problems -- no, we have problems. We have serious problems with terrorism. The main enemy of Iraqi people is al Qaeda and terrorists cooperating with them. But there are groups who are now raising arms against us, now we are negotiating with them to get them back to the political process of the Iraqi people. You have good achievements also. We hope that this will lead to more big steps forward to national reconciliation in Iraq.

We are also determined to improve our political and economic life in Iraq. We achieved -- unfortunately, media only concentrating on negative sides of Iraq. They are not concentrating on big achievements in Iraq, economic achievements, raising the salaries of the millions of Iraqis, improving the social life and the -- that all the universities, schools, hospitals are working well in Iraq. Besides the problems which we have -- we don't deny it -- we are trying to overcome these difficulties. But we have some achievements. Thanks to the United States of America and our great friend, President Bush, we achieve some good, important success.

Besides some failure in the security, we have also successes in bringing democracy for the first time to Iraq. All kinds of democratic rights are now available for Iraqi people. We have free election, we have now parliament elected by people. We have authorities -- presidency, prime minister -- chosen by the people. This is happening for the first time in the history of the Iraqi people.

Also we have some kind of success in rebuilding our country. Not all parts of Iraq are terrible. You have in the north of Iraq, Kurdistan -- in Iraq living in peace, security and prosperity. And also, in the south, you have about nine provinces now secure and gradually -- days ago the American forces delivered the responsibility of security to the authorities in Iraq -- so we are going forward -- with difficulties; I don't deny difficulties, I don't deny shortcomings, I don't deny that still we are suffering from some problems. But we are determined to benchmarks, and we are determined to move forward and to achieve, as Mr. President mentioned.

Now we are due to have the oil law, which will revolution for all Iraqis; due to review the de-Baathification. We have our new draft for this. We have another draft for investment. We are encouraging investment from outside to Iraq. And we are going to renew the local elections -- in near future for this.

But again, I am grateful to the American people, to the President of the American people, for what they have done for my people, for Iraq. We are now living in much better situation than we had in the past. And we are facing common enemy, which is still -- al Qaeda is the enemy not only of Iraq and America, but all people of the world. Look to the Arab countries, everywhere; al Qaeda -- in Morocco, in Saudi Arabia, in Egypt, al Qaeda is starting to work against all peoples of Middle East. So we are fighting this enemy. And as President Bush said, there must be no place for al Qaeda in Iraq or in other places, because if they can have such a kind of bases, they will threaten Europe and United States of America.

Again, Mr. President, thank you very much for your kind visit, and for your important words you say.