For Immediate Release
Office of the Press Secretary
May 30, 2007

THE PRESIDENT: Good morning. I thank Secretary of Treasury Paulson for joining us today. I'm pleased to announce that I will nominate Bob Zoellick to be the 11th President of the World Bank.

Bob Zoellick has had a long and distinguished career in diplomacy and development economics. It has prepared him well for this new assignment. He is a committed internationalist. He has earned the trust and support of leaders from every region of the world. He is deeply devoted to the mission of the World Bank. He wants to help struggling nations defeat poverty, to grow their economies, and offer their people the hope of a better life. Bob Zoellick is deeply committed to this cause. 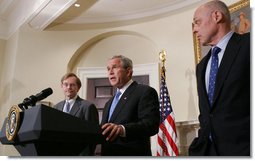 The United States has a moral and national interest in helping poor and struggling countries transform themselves into free and hopeful societies. The job of the World Bank is to help reduce poverty and raise living standards in the poorest nations. The Bank does this by helping these nations strengthen good government, develop sound financial markets, uphold property rights and combat corruption.

The United States is the Bank's largest donor, and the reason we are is because we believe that it is essential to help developing nations build growing economies that will provide jobs and opportunities for all their citizens.

Bob Zoellick brings a wealth of experience and energy to this task. Over the past three decades he's held important posts in government, business and higher education. And in these posts he has worked on issues ranging from German unification, Latin American debt relief, to the transition of post-Soviet economies. For the past six years -- or most of the past six years, he has served as a member of my Cabinet. As the United States Trade Representative, he helped bring China and Taiwan into the World Trade Organization, launched the Doha Round of trade talks at the WTO, and significantly increased the number of U.S. free trade agreements.

Bob has had a strong voice for Africa. He's helped implement the African Growth and Opportunity Act that has increased America's trade with that continent. He has served on the board of the Millennium Challenge Corporation, an initiative designed to change the way we deliver foreign aid. In 2005, I asked Bob to serve as the Deputy Secretary of State. In that role, he managed a global staff of 57,000 people, he played a leading role in our engagement with China, and he traveled frequently to Darfur and Southern Sudan to help find a path for peace. Most recently, he has been vice chairman international at Goldman Sachs. In short, it would probably be easier to list all the jobs Bob hasn't had. 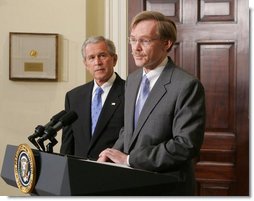 This man is eminently qualified, and when he takes his place at the World Bank he will replace another able public servant, Paul Wolfowitz. Paul is a man of character and integrity. Under his leadership, the World Bank increased its support for the world's poorest countries to a record $9.5 billion in 2006. Half of this money goes to sub-Saharan Africa. It's hope to some of the poorest folks. As Paul has helped steer more resources to these countries, he has instituted reforms designed to make sure that these resources are used wisely and achieve good results.

Paul took control over the World Bank at a critical moment. He's taken many steps to ensure that the Bank can meet the needs of developing nations in this new century. These steps include strengthening the Bank's role in combating malaria. The steps include establishing a rapid response in fragile states policy, to respond more quickly to nations recovering from crisis or war. These steps include the Clean Energy Investment Framework, a Bank initiative designed to help bring cleaner and more efficient technologies to developing countries.

In these and many other ways, Paul Wolfowitz has made the World Bank a more effective partner for development. I thank him for his dedication to the poor and his devotion to the good work of the World Bank.

Bob Zoellick is the right man to succeed Paul in this vital work. He's a leader who motivates employees. He builds constituent support, and focuses on achieving goals. I'm pleased that he has, once again, agreed to serve our country.

AMBASSADOR ZOELLICK: Thank you, Mr. President, for the confidence you've always placed in me, and for the strong support you've continually offered. Your vision of public service is to strive for great goals, and with your help, I'll do my best. I also want to thank Secretary Paulson. The United States is most fortunate to have him as Secretary of the Treasury.

The World Bank is one of the cornerstones of the architecture designed by the founders of the international marketplace and system of security after World War II. The Bank is just as important today as it was then, although in different ways, because circumstances have changed much. The World Bank has a vital mission to overcome poverty and despair through sustainable growth and opportunity. Parents everywhere want better lives and prospects for their children.

In 2001, with the encouragement of the United States, the United Nations established the Millennium Development Goals. To help achieve these targets, the World Bank needs to work in concert with a wide-ranging network of other multilateral institutions, national governments, private businesses, foundations, non-governmental organizations, as well as civil society groups. We need to approach this task with humility and creative minds, because the challenges have thwarted good intentions and efforts in the past.

In recent years, some developing countries have achieved access to finance and boost growth to impressive levels. But too many lands, particularly in Africa, are denied opportunity because of disease, weak health care and child mortality, hunger and poor agricultural infrastructure, lack of good schools, discrimination against girls and women, unsound governance and corruption, the want of property rights and the rule of law, and endangered environment, and impediments to business, investment, economic liberty, entrepreneurs, trade, and a thriving free market economy.

These people and places need hope and help and partners. Even developing countries moving up the ladder with higher growth rates still have many poor citizens and staggering problems. They need support, too. Fortunately, there's a new generation of leaders in many developing countries that is assuming responsibility for showing that poverty can be surmounted.

This work, the purpose of the World Bank, is not about charity. The United States has been a strong supporter of the World Bank since its inception. The Bank's reliance on markets, investments, sound policies, good governance and partnerships for self-help are in keeping with the values that Americans esteem. The Bank is about working with men and women around the globe, no matter what their burdens or birth, to have the opportunity to achieve their potential and contribute to the well-being of others in their environment.

The World Bank has passed through a difficult time for all involved. There are frustrations, anxieties, and tensions about the past that could inhibit the future. This is understandable, but not without remedy. We need to put yesterday's discord behind us and to focus on the future together. I believe that the World Bank's best days are still to come.

I look forward to working with the World Bank team, professionals whose overriding goal is to help others. I want to hear their ideas on how to do so. I plan to meet soon with contributors and borrowers and many partners of the World Bank to listen to their perspectives on how the World Bank can best fulfill its purpose. If the board and members of the Bank then concur with this nomination, it will be my aim to work closely with and learn from the institution's dedicated and talented staff. Together, we can consult closely with the Bank's many stakeholders and partners to set a course to advance its missions.

It would be an honor to help lead this key institution and to work with the many fine professionals from all over the world who are dedicated to overcoming poverty and creating opportunity.

I would like to thank the U.S. Congress, the people of America, and the governments and peoples of other contributing countries for their generous support of this valuable institution. And I'd like most of all to thank the President, again, for offering this opportunity to lead the World Bank as a steward of development, growth and hope.