For Immediate Release
Office of the Press Secretary
May 28, 2007

THE PRESIDENT: Thank you, all. Secretary England, members of the Cabinet, General Pace, members of Congress, members of the United States military, veterans, families of the fallen, our fellow citizens: Welcome.

Today we honor the warriors who fought our nation's enemies, defended the cause of liberty, and gave their lives in the cause of freedom. We offer our love and our heartfelt compassion to the families who mourn them. We pray that our country may always prove worthy of the sacrifices they made. 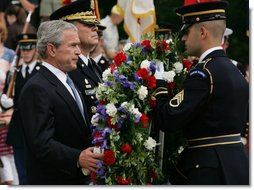 Many names here are known: the 18-year-old Union soldier named Arthur MacArthur, who grabbed a falling flag and carried it up Missionary Ridge; the Tuskegee Airmen who defended America abroad and challenged prejudice at home; the slain war hero and President who asked that we "assure the survival and success of liberty" and found his rest beneath an eternal flame. Still others here are remembered only by loving families. Some are known only to God.

Now this hallowed ground receives a new generation of heroes -- men and women who gave their lives in places such as Kabul and Kandahar, Baghdad and Ramadi. Like those who came before them, they did not want war -- but they answered the call when it came. They believed in something larger than themselves. They fought for our country, and our country unites to mourn them as one.

We remember Army Specialist Ross Andrew McGinniss. Ross was born on Flag Day in 1987. When he was in kindergarten, he said he wanted to grow up to be "an Army man." He enlisted at 17 -- the first day he was eligible. He deployed to Iraq. Last December, a grenade was thrown into his Humvee as Ross was patrolling the streets of Baghdad. The soldiers inside could not escape in time, so Ross leapt into the vehicle and covered the grenade with his own body. By sacrificing himself to save four other men, he earned a Silver Star -- and the eternal gratitude of the American people.

We remember Marine Sergeant Marc Golczynski of Murfreesboro, Tennessee. Marc volunteered for a second tour of duty in Iraq. He knew the dangers his service would entail. Before he deployed, he wrote the following in an email to his family and friends: "Please don't feel bad for us. We are warriors, and as warriors have done before us we fight and sometimes die so our families do not have to." Marc left behind an eight-year-old son, Christian, who is with us today; he managed to be brave while he held his father's folded flag. 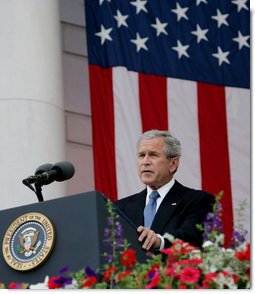 With us are other children and families mourning moms and dads and sons and daughters. Nothing said today will ease your pain. But each of you need to know that your country thanks you, and we embrace you, and we will never forget the terrible loss you have suffered. I hope you find comfort in knowing that your loved ones rest in a place even more peaceful than the fields that surround us here.

The greatest memorial to our fallen troops cannot be found in the words we say or the places we gather. The more lasting tribute is all around us -- a country where citizens have the right to worship as they want, to march for what they believe, and to say what they think. These freedoms came at great costs -- and they will survive only as long as there are those willing to step forward to defend them against determined enemies.

As before in our history, Americans find ourselves under attack and underestimated. Our enemies long for our retreat. They question our moral purpose. They doubt our strength of will. Yet even after five years of war, our finest citizens continue to answer our enemies with courage and confidence. Hundreds of thousands of patriots still raise their hands to serve their country; tens of thousands who have seen war on the battlefield volunteer to re-enlist. What an amazing country to produce such fine citizens.

Laura and I have met many of them; we've sat at the bedsides of the wounded. This morning, I met service members who received medals for distinguished service -- and found myself humbled by their grace and their grit. I had the honor of meeting with families of the fallen in the Oval Office, and was amazed by their strength and resolve and decent grace under pressure. We've heard of 174 Marines recently -- almost a quarter of a battalion -- who asked to have their enlistments extended. For these extensions, they would earn no promotion and no promise of a favored posting. They want to serve their nation. And as one of them put it this way: "I'm here so our sons don't have to come and fight here someday."

Those who serve are not fatalists or cynics. They know that one day this war will end -- as all wars do. Our duty is to ensure that its outcome justifies the sacrifices made by those who fought and died in it. From their deaths must come a world where the cruel dreams of tyrants and terrorists are frustrated and foiled -- where our nation is more secure from attack, and where the gift of liberty is secured for millions who have never known it.

This is our country's calling. It's our country's destiny. Americans set off on that voyage more than two centuries ago, confident that this future was within our reach -- even though the shore was distant, and even though the journey may be long. And through generations, our course has been secured by those who wear a uniform, secured by people who man their posts, and do their duty. They have helped us grow stronger with each new sunrise.

On this Day of Memory, we mourn brave citizens who laid their lives down for our freedom. They lived and died as Americans. May we always honor them. May we always embrace them. And may we always be faithful to who they were and what they fought for.

Thank you for having me. May God bless you and may God continue to bless our country. (Applause.)