For Immediate Release
Office of the Press Secretary
May 17, 2007

THE PRESIDENT: Secretary Gutierrez and Secretary Chertoff have just briefed me about the negotiations on the comprehensive immigration bill that just concluded in the Senate. I want to thank, first of all, my Secretaries for being involved in the process, being engaged in this important issue, and helping move the process forward. I congratulate members of the Senate, both political parties, who decided it was time to work together to come up with a comprehensive immigration bill that addresses a major problem facing our country. After weeks of long work, these negotiations came to a successful conclusion. 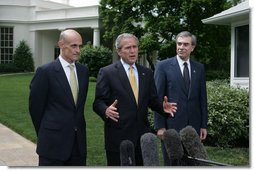 I want to thank the members of the Senate who worked hard. I appreciate the leadership shown on both sides of the aisle. As I reflect upon this important accomplishment, important first step toward a comprehensive immigration bill, it reminds me of how much the Americans appreciate the fact that we can work together -- when we work together they see positive things.

Immigration is a tough issue for a lot of Americans. The agreement reached today is one that will help enforce our borders, but equally importantly, it will treat people with respect. This is a bill where people who live here in our country will be treated without amnesty, but without animosity.

And so I want to thank you all very much for representing the White House. I thank the senators for working hard. I look forward to a good vote out of the United States Senate as quickly as Leader Reid can get the bill moving, and then of course we look forward to working with the House of Representatives to take this first step and convert it into a successful second step. I really am anxious to sign a comprehensive immigration bill as soon as I possibly can. Today we took a good step toward that direction.