For Immediate Release
Office of the Press Secretary
May 17, 2007

THE PRESIDENT: Thank you. Good afternoon. Welcome. Here we are in the East Room, a room that has had a long history. When President John Adams moved in, his wife, Abigail, used it to dry the family's laundry. (Laughter.) Abraham Lincoln's children once raced their goats in this room during a reception. (Laughter.) 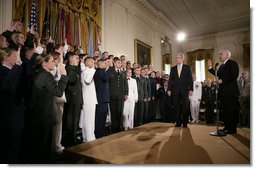 Over the years this room has been used for dances, concerts, weddings, funerals, award presentations, press conferences and bill signings. Today we add another event to the storied legacy of the East Room -- the first Joint ROTC Commissioning Ceremony. And we're glad you're here.

The young men and women we honor today represent the great diversity of the American people. You come from different backgrounds; you represent all 50 states and the District of Columbia, as well as Guam, Puerto Rico, American Samoa and the U.S. Virgin Islands. And when you leave here today, you will wear on your shoulders the same powerful symbol of achievement: the gold bars of an officer of the United States Armed Forces.

Mr. Secretary, thank you for joining us. Proud to be here with Secretary Bob Gates and Becky. I thank Pete Geren, Acting Secretary of the Army. I appreciate so very much General Pete Pace, Chairman of the Joint Chiefs; General George Casey, Chief of Staff of the U.S. Army. You all have brought out some of the brass. (Laughter.)

I appreciate all the others in our military here, too. Thanks for coming.

We gather at a solemn moment for this country. Many of you were still in high school when terrorists brought death and destruction to our streets on September the 11th, 2001. You were high school students. And yet, some of you understood that the cause of freedom would soon depend on your generation's willingness to step forward to defend it. And when it came time to be counted, each of you volunteered, knowing full well the risks involved during a time of war. As your Commander-in-Chief, I salute your decision to serve, and I congratulate you on a fine achievement.

The idea of providing college students an opportunity to train for a military commission has its roots in the old land-grant universities of the 19th century -- which included a program of military science. The modern program dates to 1916 -- when the government established the Reserve Officers Training Corps to improve and standardize the training of junior officers. ROTC starts by identifying men and women of leadership and ability. It then prepares them morally, mentally, and physically for their responsibilities as officers in the finest Armed Forces in the world. 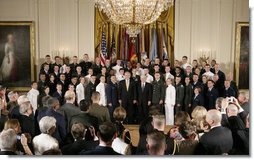 As part of this preparation, you have been taught a way of life that elevates service above self. You have learned that honor is not just a word -- it is a sacred inheritance to be preserved and handed down. You have learned that courage is not the absence of fear -- it is the ability to do the right thing in spite of your fears. And you have learned that much is expected of our military officers. For most of you, an ROTC scholarship helped pay for your college education. The American people provide these funds willingly. And in return they ask one thing: when their sons and daughters are put in harm's way, they will be led by officers of character and integrity.

The path you have taken to this day is not an easy one. When your roommates slept in -- (laughter) -- you got up at dawn for a three-mile run. While others spread out on the grass on a sunny day, you marched in formation. And when your friends called it a night and headed out to the town, you stayed back to shine your shoes and iron your uniform in preparation for the next day's inspection.

All of you have made many sacrifices to receive your commission. Yet some of you have had to endure even greater hardships -- because your universities do not allow ROTC on campus. For those of you in this position, this can require long commutes several times a week to another campus that does offer ROTC, so you can attend a military class, participate in a drill. Most of all, it means living a split existence -- where your life as a cadet or midshipmen is invisible to most of your fellow students.

Every American citizen is entitled to his or her opinion about our military. But surely the concept of diversity is large enough to embrace one of the most diverse institutions in American life. It should not be hard for our great schools of learning to find room to honor the service of men and women who are standing up to defend the freedoms that make the work of our universities possible. To the cadets and midshipmen who are graduating from a college or university that believes ROTC is not worthy of a place on campus, here is my message: Your university may not honor your military service, but the United States of America does. (Applause.) And in this, the people's house, we will always make a place for those who wear the uniform of our country.

In a few minutes, you will raise your right hands, and swear an oath to defend our Constitution from all enemies foreign and domestic, knowing that these enemies are real. You will receive your commissions as officers, knowing that you will soon have the lives of other men and women in your own hands. You will leave this room with heads held high, knowing that you take your place in one of the greatest forces for freedom in the history of mankind. 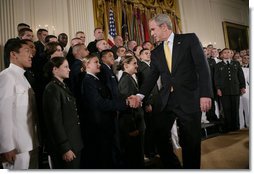 So I ask you today: Bring honor to the uniform. Set high standards for yourself. Do not ask of those under your command anything that you would not ask of yourselves. If you do all these things, your career will take care of itself, your service will be a source of pride, and you will help build a safer and more hopeful world for your fellow citizens.

So congratulations to our new lieutenants and ensigns. And may Almighty God keep you close as you keep the American people safe.

And now I ask the Secretary of Defense to administer the oath. 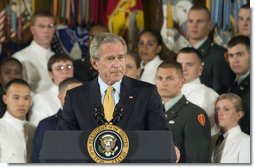 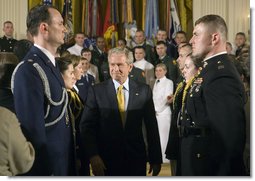