For Immediate Release
Office of the Press Secretary
May 16, 2007

THE PRESIDENT: I appreciate the discussion we just had on immigration. With us are people who are employers, people who provide work for citizens who are in our country legally. They know full well it's against the law to hire somebody who is here illegally. They need help from the government to make sure the person they hire is here legally, that they're not dealing with forged documents. 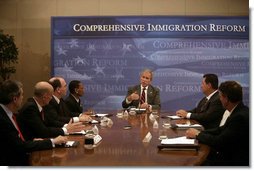 And so we've been reviewing the upgrading of the basic pilot program, which is the government's attempt to help small business owners and larger business owners make sure that the people they're finding work for are not breaking the law. In other words, we can't ask our employers to verify somebody here unless we help them. And the reason why we're talking about this subject is that holding employers to account for violating the law is an integral part of a comprehensive immigration reform package.

I thank members of my Cabinet, Secretaries Gutierrez and Chertoff, for taking the White House lead in working with members of the United States Senate to get a comprehensive immigration bill to the floor as quickly as possible, that can pass the Senate. And it's been hard work. This is a very emotional issue. I firmly believe that the bill needs to be comprehensive. You can't have one aspect of immigration reform passed and not other aspects, otherwise we'll be back to where we were in the past, and that is reform efforts have failed because it hadn't been comprehensive enough.

The best way, and, frankly, the only way to get a comprehensive bill done that will matter and deal with this issue once and for all is for the bipartisan approach that we're now working on to come to fruition, that it's got to be a bipartisan bill that is -- is that bill our Secretaries are working on with members from both parties in the Senate. Hopefully, that bill can get to the floor as quickly as possible, and hopefully we can get a positive vote so we can get the bill over to the House of Representatives.

But there is a good chance, I'm optimistic that we can get comprehensive immigration reform, one, that enforces our borders; two, holds employers to account; three, recognizes we've got workers here who are doing jobs Americans aren't doing, and they ought to have a -- there ought to be a temporary worker permit to do so; four, to make sure that we treat people who are here already with respect and dignity, without amnesty, without animosity; and, five, to continue the assimilation program so necessary to make sure our country continues to move forward in an optimistic way.

And so I want to thank you all for sharing with me your stories. I appreciate the fact that you're deeply concerned about upholding the law. I thank you for sharing with me your desire to see that Congress get a comprehensive immigration bill done soon. And I assure you that the White House, along with the decent, honorable members of the Senate, are working very hard to bring that bill to a conclusion. 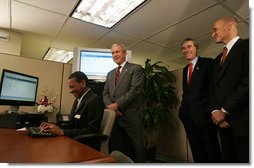