For Immediate Release
Office of the Press Secretary
May 15, 2007

We have just had a wide-ranging, significant dialogue. We talked about a lot of areas of interest. Two areas that I think really will have a profound effect on our respective countries, as well as on the world, are the issue of climate change and trade. 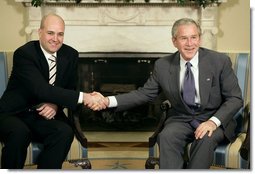 Let me start with trade. The Prime Minister is very interested in the Doha Round. He's interested in U.S. strategies to achieve success in the Doha Round. I assured him that we're committed to achieving a world that trades more freely; that we recognize we have obligations to do -- to deal with our agricultural subsidies in order to move the Doha Round forward; that Sue Schwab is committed to working with our European counterparts, as well as President Lula of Brazil, Prime Minister Singh of India -- two countries that represent others involved in the Doha Round -- and we believe that it's possible, very possible that we'll be successful. And so we're moving forward optimistically on this issue.

Secondly, we talked about climate change. The Prime Minister is concerned about greenhouse gases. I share your concerns about this issue. We talked about how, on the one hand, we can work together -- as I understand, we're signing some agreements that have -- that move forward alternative energy proposals. I assured the Prime Minister that here at home, that I'm concerned about the environmental issues, as well as the national security implication for being too dependent on oil.

I shared with him my optimism about reducing U.S. gasoline consumption by 20 percent over the next 10 years by promoting alternative fuels. I talked to him about our desire to work with Europe and China and India and Japan and Australia and other countries about an international framework that will meet the following objectives: One, economic vitality and growth; two, the advance of new technologies; and third, obviously, the effects that will have on reducing greenhouse gases.

The Prime Minister made this a center point of our conversation, and I fully appreciate and understand why. I appreciate the leadership you've taken on this important issue, not only in your country, but at the EU, as well. It's noticeable to me here in the United States, and I congratulate you for being the strong leader that you are.

All in all, we've had a wonderful discussion, and I welcome you here to the Oval Office.

PRIME MINISTER REINFELDT: Thank you very much. It's been great. Thank you.

Well, I feel -- will say that I pointed out the importance of President Bush's leadership on the Doha Round. There are too few in the world fighting for free trade, so we need the President on that. And I hope we could, during a very short span, bring this to an end.

And I was so grateful for the comments and leadership on the climate issue. It will be debated many years to come. So thank you very much for that.