For Immediate Release
Office of the First Lady
May 14, 2007

Mrs. Bush's Remarks in a Roundtable on Women and Heart Disease with the Heart Truth
The George Washington University Hospital
Washington, D.C.

MRS. BUSH: I'd like to just start off by saying that yesterday, Mother's Day, kicked off National Women's Health Week. So this is a week that we can talk about a lot of things that have to do with women's health. But certainly I think we should start talking about the number one killer of women in the United States, and men, and that's heart disease. 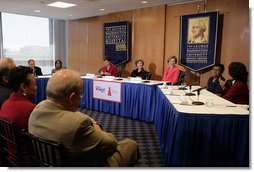 And I was asked by Dr. Nabel and others to join The Heart Truth campaign five years ago. And when I was asked, I was surprised that heart disease was the number one killer. I just didn't know. I assumed cancer was. And I knew if I didn't know, that most women probably didn't know either. So this has been a great way to get the word out to women, and of course the red dress is the symbol of The Heart Truth campaign, and it's the perfect symbol for women.

As everyone knows, who heard about the Kennedy Center Honors, where four people who were guests at the White House had on the same red dress I did -- (laughter) -- it just shows women love red dresses. But I sent that red dress to the Reagan library, where Nancy Reagan had The Heart Truth campaign all this month, actually, and had dresses -- red dresses from around the country. And they say a lot of people showed up to look at those red dresses and get screenings.

But today, starting today, I hope women in our town, in Washington, and close to Washington, will get their mothers and their sisters and their friends and go to Union Station, where The Heart Truth Road Show is. You can get free screenings for cholesterol, blood pressure, diabetes screenings. You can see some of the red dresses by the famous designers that are there as part of the show. And this road show will be at Union Station until Wednesday from 11am to 5pm everyday. So I urge Washington-area women to call your mothers and sisters and go down to The Heart Truth Road Show and get those screenings. And then if you find out you do have high blood pressure or high cholesterol, then you'll know you need to follow up and see your doctor and see what you can do to treat it.

The main purpose of The Heart Truth Campaign is just to let women know that heart disease is not just a man's disease, because women a lot of times don't have the same symptoms if they're getting ready to have a heart attack, and so they don't go to the doctor, because they think they can just lie down, and in a little bit they'll get up and keep doing whatever, and so they get to the doctor and the emergency room later, and quite often suffer more damage because of that.

But I think we are getting the word out. I saw a patient just then, here, that's at the hospital here, that was on the subway. She started sweating profusely. When she got off to change to the other -- her other train, she realized she needed to call emergency 9-1-1, and she did, and she got here in plenty of time, and she's going to be fine. 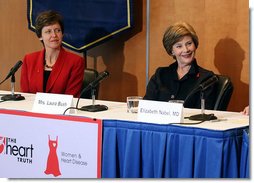 But that's the message we want to get out to women all across the country -- your symptoms may not be the crushing chest pain that we associate with heart disease, it might be a neck pain, a jaw pain, a burning in your back, extreme fatigue. Those are the symptoms that women might have instead of what we think of as the classic symptoms. So if you have those symptoms, go on to a heart center if you have one close to you, or to the emergency room.

So thanks, everybody. I'm so happy to be here and I want to congratulate Dr. Nabel for The Heart Truth campaign. The word is getting out. We do have research that show many more women now than when we started in 2000 know that heart disease is the leading cause of death among American women.

DR. NABEL: Mrs. Bush, I know one of the things you're very interested is in healthy lifestyle. I know you like to walk and exercise. Maybe you could share some of your insights.

MRS. BUSH: Well, it is really important to try to address each one of the risk factors. Obviously, if you have high blood pressure or high cholesterol you can be treated by your doctor. But there are other steps that women can take that they can take by themselves, and that is to eat healthy foods, to lose weight if you're obese, to exercise. Those are three steps that women can take to have a healthy lifestyle.

I think the best thing to start with is exercise. If you start walking, try to get a friend. I think that's the most effective, is to have somebody that is expecting you to show up on the corner to walk with them, so you have to get up and do it, and just start exercising. And once you really start to walk every day, I think you start feeling a lot better, and you feel more empowered to then change the other things that are harder, which is losing weight. I think that's harder, and quitting smoking is harder. After a while, exercise and smoking don't -- are counterproductive, and I think it's easier to quit if you have started exercising.

So I really want to encourage women to go for walks everyday. It's the easiest thing to do. Almost everybody can do it. You can do it in your own neighborhood. All you need is a good pair of shoes and a friend to walk with, or a dog, if you don't have a friend to walk with. But I think that's really important.

The other really good side effect of that is that women are the ones, usually, who buy the food for the home. They are the ones who are cooking the meals for the family. They are the ones who are the good example to their children if they get up and go for a walk, or show their children that they're going to exercise in some way. So if you start to change your own lifestyle with these little steps, you can make a really good impact on your whole family. So I want to encourage women to make those steps and know that when they do, they're helping their husbands, and they're helping their children, as well.

MS. JACKSON: I think I would admonish women to be very aware of their bodies; pay attention to those little things that come up that you never really noticed before, but is going on now, and just go to the doctor. I was always putting it off, and putting it off. Go when something is wrong.

One of the things I've heard from a lot of the patients I've met is that they are speaking out. And I want to thank you all so much for getting the word out. A lot of -- one woman that I met in Kansas City -- I actually didn't meet here until later. She saw me on television in Kansas City, and that night she woke up and -- she just had been to the doctor two days before because she wasn't feeling well. But she woke up and woke up her husband, and said, I saw Mrs. Bush on TV today, and I think the symptoms that I'm having are a heart attack. They were. So, anyway, she now speaks to churches all over Kansas and all over Kansas City to get the word out to people. She's a very articulate speaker for women's awareness. And that's what I want to thank all of you for being, as well.