For Immediate Release
Office of the Press Secretary
May 14, 2007

Executive Order: Cooperation Among Agencies in Protecting the Environment with Respect to Greenhouse Gas Emissions From Motor Vehicles, Nonroad Vehicles, and Nonroad Engines

THE PRESIDENT: Thank you all for coming. Good afternoon. I just finished a meeting with the Administrator of the Environmental Protection Agency, Secretaries of Transportation and Agriculture, and the Deputy Secretary of Energy. Thank you all for being here.

We discussed one of the most serious challenges facing our country: our nation's addiction to oil and its harmful impact on our environment. The problem is particularly acute in the transportation sector. Oil is the primary component of gasoline and diesel, and cars and trucks that run on these fuels emit air pollution and greenhouse gases. 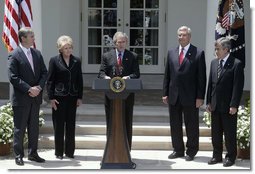 Our dependence on oil creates a risk for our economy, because a supply disruption anywhere in the world could drive up American gas prices to even more painful levels. Our dependence on oil creates a threat to America's national security, because it leaves us more vulnerable to hostile regimes, and to terrorists who could attack oil infrastructure.

For all these reasons, America has a clear national interest in reducing our dependence on oil. Over the past six years, my administration has provided more than $12 billion for research into alternative sources of energy. I'd like to thank the Congress for its cooperation in appropriating these monies. We now have reached a pivotal moment where advances in technology are creating new ways to improve energy security, strengthen national security, and protect the environment.

To help achieve all these priorities, I set an ambitious goal in my State of the Union: to cut America's gasoline usage by 20 percent over the next 10 years. I call this goal 20-in-10, and I have said -- sent to Congress a proposal that would meet it in two steps: First, this proposal will set a mandatory fuel standard that requires 35 billion gallons of renewable and other alternative fuels by 2017. That's nearly five times the current target.

Second, the proposal would continue our efforts to increase fuel efficiency. My administration has twice increased fuel economy standards for light trucks. Together, these reforms would save billions of gallons of fuel and reduce net greenhouse gas emissions without compromising jobs or safety.

My proposal at the State of the Union will further improve standards for light trucks and take a similar approach to automobiles. With good legislation, we could save up to 8.5 billion gallons of gasoline per year by 2017, and further reduce greenhouse gas emissions from cars and trucks.

Last month, the Supreme Court ruled that the EPA must take action under the Clean Air Act regarding greenhouse gas emissions from motor vehicles. So today, I'm directing the EPA and the Department of Transportation, Energy, and Agriculture to take the first steps toward regulations that would cut gasoline consumption and greenhouse gas emissions from motor vehicles, using my 20-in-10 plan as a starting point.

Developing these regulations will require coordination across many different areas of expertise. Today, I signed an executive order directing all our agencies represented here today to work together on this proposal. I've also asked them to listen to public input, to carefully consider safety, science, and available technologies, and evaluate the benefits and costs before they put forth the new regulation.

This is a complicated legal and technical matter, and it's going to take time to fully resolve. Yet it is important to move forward, so I have directed members of my administration to complete the process by the end of 2008. The steps I announced today are not a substitute for effective legislation. So my -- members of my Cabinet, as they begin the process toward new regulations, will work with the White House, to work with Congress, to pass the 20-in-10 bill.

When it comes to energy and the environment, the American people expect common sense, and they expect action. The policies I've laid out have got a lot of common sense to them. It makes sense to do what I proposed, and we're taking action, by taking the first steps toward rules that will make our economy stronger, our environment cleaner, and our nation more secure for generations to come.

Thank you for your attention.