For Immediate Release
Office of the Press Secretary
May 13, 2007

THE PRESIDENT: Thank you all. Thank you, Justice O'Connor. Laura and I are really happy to join you today. This state is known at the "Mother of Presidents," which reminds me, I needed to call my Mother today. (Laughter.) I wish all mothers around our country a happy Mother's Day. And if you haven't called your mother, you better start dialing here after this ceremony. (Applause.)

We're honored to be in Jamestown on this historic day. We appreciate the opportunity to tour the beautiful grounds here. I would urge our fellow citizens to come here, see the fantastic history that's on display. I think you'll be amazed at how our country got started. And I want to thank all the good folks who are working to preserve the past for your hard work, and I appreciate the fact that you spent a lot of time educating our fellow citizens. 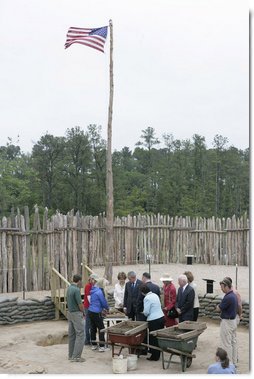 Jamestown was the first permanent English settlement in America; it predated the Mayflower Compact by 13 years. (Applause.) This is a very proud state, and some people down here like to point out that the pilgrims ended up at Plymouth Rock by mistake. (Laughter.) They were looking for Virginia. (Laughter.) They just missed the sign. (Laughter.)

As we celebrate the 400th anniversary of Jamestown to honor the beginnings of our democracy, it is a chance to renew our commitment to help others around the world realize the great blessings of liberty. And so Laura and I are proud to join you. Justice, it's good to see you. There's no finer American than Sandra Day O'Connor, and I'm proud to share the podium with her. (Applause.)

We're also proud to be with Governor Tim Kaine and Anne Holton. I'm proud to call them friends, and I hope, Ms. Kaine, that the Governor recognized Mother's Day. Glad you're here. I want to thank Secretary Dirk Kempthorne of the Department of the Interior; Michael Griffin, the administrator of NASA; members of the United States Congress; members of the statehouse, including the Lieutenant Governor. I appreciate the Attorney General being here. I thank the Speaker for joining us. Most of all, thank you for coming.

The story of Jamestown will always have a special place in American history. It's the story of a great migration from the Old World to the New. It is a story of hardship overcome by resolve. It's a story of the Tidewater settlement that laid the foundation of our great democracy. 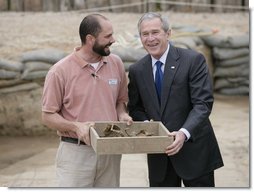 That story began on a dock near London in December of 1606. More than a hundred English colonists set sail for a new life across the ocean in Virginia. They had dreams of paradise that were sustained during their long months at sea by their strong spirit. And then they got here, and a far different reality awaited them.

On May 13, 1607, 400 years today, they docked their ships on a marshy riverbank. Being loyal subjects, they named the site after their King, and that's how Jamestown was born. Today we celebrate that moment as a great milestone in our history, yet the colonists who experienced those first years had little reason to celebrate.

Their search for gold soon gave way to a desperate search for food. An uneasy peace with the Native Americans broke into open hostilities. The hope for a better life turned into a longing for the comforts of home. One settler wrote, "There were never Englishmen left in a foreign country in such misery as we were in the new discovered Virginia."

Looking back, 400 years later, it is easy to forget how close Jamestown came to failure. The low point came after the terrible winter of 1610. The survivors boarded their ships. They were prepared to abandon the settlement, and only the last minute arrival of new settlers and new provisions saved Jamestown. Back in London, one court official summed up the situation this way: "This is an unlucky beginning. I pray God the end may prove happier."

Well, the prayers were answered. Jamestown survived. It became a testament to the power of perseverance and determination. Despite many dangers, more ships full of new settlers continued to set out for Jamestown. As the colony grew, the settlers ventured beyond the walls of their three-sided fort, and formed a thriving community. Their industry and hard work transformed Jamestown from a distant English outpost into an important center for trade.

And during those early years, the colonists also planted the seeds of American democracy, at a time when democratic institutions were rare. On their first night at Jamestown, six of the leading colonists held the first presidential election in American history. And you might be surprised to know that the winner was not named George. (Laughter.) A matter of fact, his name was Edward Wingfield. I call him Eddie W. (Laughter and applause.) 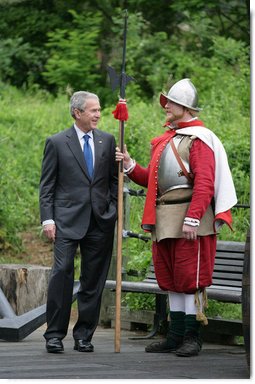 From these humble beginnings, the pillars of a free society began to take hold. Private property rights encouraged ownership and free enterprise. The rule of law helped secure the rights of individuals. The creation of America's first representative assembly ensured the consent of the people and gave Virginians a voice in their government. It was said at the time that the purpose of these reforms was, "to lay a foundation whereon a flourishing state might, in time, by the blessing of Almighty God, be raised."

Not all people shared in these blessings. The expansion of Jamestown came at a terrible cost to the native tribes of the region, who lost their lands and their way of life. And for many Africans, the journey to Virginia represented the beginnings of a life of hard labor and bondage. Their story is a part of the story of Jamestown. It reminds us that the work of American democracy is to constantly renew and to extend the blessings of liberty.

That work has continued throughout our history. In the 18th century our founding fathers declared our independence, and dedicated America to the principle that all men are created equal. In the 19th century our nation fought a terrible civil war over the meaning of those famous words, and renewed our founding promise. In the 20th century Americans defended our democratic ideals against totalitarian ideologies abroad, while working to ensure we lived up to our ideals here at home. As we begin the 21st century, we look back on our history with pride, and rededicate ourselves to the cause of liberty. (Applause.)

Today democratic institutions are taking root in places where liberty was unimaginable not long ago. At the start of the 1980s, there were only 45 democracies on Earth. There are now more than 120 democracies, and more people now live in freedom than ever before. (Applause.)

America is proud to promote the expansion of democracy, and we must continue to stand with all those struggling to claim their freedom. The advance of freedom is the great story of our time, and new chapters are being written every day, from Georgia and Ukraine, to Kyrgyzstan and Lebanon, to Afghanistan and Iraq. From our own history, we know the path to democracy is long, and it's hard. There are many challenges, and there are setbacks along the way. Yet we can have confidence in the outcome, because we've seen freedom's power to transform societies before. 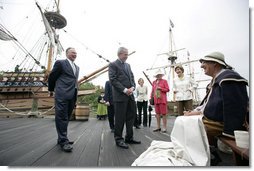 In World War II, we fought Germany on battlefields across Europe, and today a democratic Germany is one of our strongest partners on the Continent. And in the Pacific, we fought a bloody war with Japan. And now our alliance with a democratic Japan is the linchpin for freedom and security in the Far East. These democracies have taken different forms that reflect different cultures and traditions. But our friendship with them reminds us that liberty is the path to lasting peace, and that democracies are natural allies for the United States.

Today we have no closer ally than the nation we once fought for our own independence. Britain and America are united by our democratic heritage, and by the history that began at this settlement 400 years ago. Last month some of the greatest legal minds in Britain and America, including Justice O'Connor and Chief Justice John Roberts, came to Jamestown to lay a plaque commemorating our shared respect for the rule of law and our deeply held belief in individual liberty.

Over the years, these values have defined our two countries. Yet they are more than just American values and British values, or Western values. They are universal values that come from a power greater than any man or any country. (Applause.) These values took root at Jamestown four centuries ago. They have flourished across our land, and one day they will flourish in every land.