For Immediate Release
Office of the Vice President
May 11, 2007

Vice President's Remarks at a Rally for the Troops
USS John C. Stennis

THE VICE PRESIDENT: Thank you. A reception like that is almost enough to make me want to run for office again. (Applause and cheers.) I said almost, almost. (Laughter.)

But I'm delighted to be here today and it's great to be welcomed aboard this great American carrier. I've been in the Middle East this week for meetings with friends and allies, and on a journey like this I always like to spend some time with the men and women who go to work every day defending the United States of America. So I'm delighted to be with this great Battle Group, the crew of the USS John C. Stennis, and the men and women of Air Wing Nine. 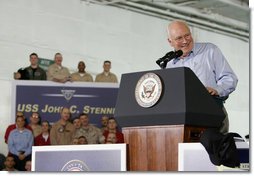 It's good to see all of you, and it's a special privilege to visit the Stennis. This fine ship's company is comprised of sailors from across the United States - from New York to Ohio ... from Florida to Texas ... from Missouri to California. (Cheers.) Anybody here from Wyoming? (Cheers.) Well, it's a small contingent, but it's quality, I can tell. (Laughter.) You think it'd be bigger, given the breadth of Wyoming's coastline and our maritime traditions. (Laughter.)

As Admiral Quinn noted - and I've been around for a while -- so long, in fact, that I even knew Senator John Stennis personally. But I've never been more proud of the United States military than I am today. It's an incredibly challenging time for the country, and there's serious work being done on many fronts. You're doing all that we ask of you, and you're doing it with skill and with honor. So I'm here to say thank you ... and to bring greetings from our Commander-in-Chief, President George W. Bush. (Applause and cheers.)

The last time I stood on the deck of the Stennis was five years ago, during Operation Enduring Freedom. There's been a lot of activity in the five years since, and this warship and the JCS Strike Group have been at the center of many great events. It's not easy duty to serve in this part of the world. It's a place of tension and many conflicts. Throughout the region our country has interests to protect and commitments to honor. With two carrier strike groups in the Gulf, we're sending clear messages to friends and adversaries alike. We'll keep the sea lanes open. We'll stand with our friends in opposing extremism and strategic threats. We'll disrupt attacks on our own forces. We'll continue bringing relief to those who suffer, and delivering justice to the enemies of freedom. And we'll stand with others to prevent Iran from gaining nuclear weapons and dominating this region. These are important duties, and they must all be done at the same time. There's no way we could do it all without you, and all those who have stepped forward to serve our country. America is a nation that keeps its promises - and for that, we can thank the men and women of the United States military. (Applause and cheers.)

Our presence here has been vital for many years, but never more than in the time since September 11th, 2001. The John C. Stennis was in the fight early, deploying to the Arabian Sea just weeks after 9/11. Since the war on terror began, this carrier has sailed thousands of nautical miles, and thousands of sorties have been flown from the deck above us. Thanks in part to this ship's company and Air Wing Nine, we've struck major blows against the al-Qaeda network that hit America. (Applause and cheers.) We've removed two dictatorships that sponsored terror, liberated 50 million people from tyranny, deterred aggression, and stood by young democracies, as America always does.

The work goes on, because the set of challenges that arrived on 9/11 is unlike any other this nation has ever faced. The war against al-Qaeda terrorists is not a matter of finding an opposing army and engaging it, or finding a navy and sinking it. The terrorist enemies are hidden and dispersed. They view the entire world as a battlefield - and that is why we're dealing with them systematically, from Afghanistan to Iraq. This enemy is determined to commit indiscriminate murder against innocent, unsuspecting men, women, and children. They serve an ideology that rejects tolerance and demands total obedience. It's an extreme and hateful ideology - and what it's done is to drive 19 men to get on airplanes and to come to kill 3,000 Americans.

The terrorists who have declared war on America have made Iraq the central front in that war. Osama Bin Laden and his lieutenants believe they can wear us down, break our will, force us out, and make Iraq a safe haven for terror. They see Iraq as the center of a new caliphate, from which they can stir extremism and violence throughout the region, and eventually carry out devastating attacks against the United States and others.

The terrorists have stated these ambitions clearly, and they intend to pursue them with ferocity. The United States, also, has made a decision: As the prime target of a global terror campaign, we will take the fight to the enemy. We will not sit back and wait to be hit again. (Applause.)

While the forces of violence inflict harm and grief on the Iraqi people, the citizens of that country have shown their courage, and fortitude, and their own desire for freedom and self government. They defied assassins and car bombers to vote in three national elections. They have adopted the most progressive, democratic constitution in the Arab world. And they have elected men and women to lead Iraq on a path to reconciliation, progress, and peace. Success in Iraq remains critical to our national security.

The ultimate solution in Iraq will be a political solution. But that requires basic security, especially in Baghdad, where our troops are working beside Iraqi forces to carry out a new strategy. In our briefings in Iraq in these last few days, General Petraeus underscored the fact that the enemy tactics are barbaric ... that we can expect more violence as they try to destroy the hopes of the Iraqi people. But they told me as well of the progress that's been made in fighting al-Qaeda terrorists, seizing weapons, and getting actionable intelligence. The job now is to persevere in every area of operations - from Baghdad, to Anbar Province, to the border areas. And I think General Petraeus's own words put it best: "We cannot allow mass murderers to hold the initiative. We must strike them relentlessly. We and our Iraqi partners must set the terms of the struggle, not our enemies. And together we must prevail." (Applause.)

The United States of America has learned the lessons of history. Nearly six years ago, we saw that dangers can accumulate on the far side of the world, yet still find us in our own country. We've learned as well that terrorist attacks are not caused by the use of strength ... they are invited by the perception of weakness. You and every member of our military can be certain that America will stay on the offensive in the war on terror. The Commander-in-Chief and his national security team understand the threat - the enemy's changing tactics and its unchanging nature. We know that we're not dealing with adversaries that will surrender or suddenly come to their senses. So we'll be flexible. We'll do all we can to adapt to conditions on the ground. We'll make every change necessary to do the job. And I want you to know that the American people will not support a policy of retreat. We want to complete the mission, we want to get it done right, and then we want to return home with honor. (Applause and cheers.)

Each and every one of you needs to know how much your service means to our country. We're grateful to you, and to your families back home - because they, also, make sacrifices for America.

Our nation has accepted many serious responsibilities. To be credible, our forces must be able to deploy wherever they're needed - and this, in turn, requires the power to sail the oceans of the world, in control of the surface, the sub-surface, and the skies overhead. That's the business you're in - and when you're on board a carrier the work goes on around the clock, seven days a week. Each one of you is here for a reason. You have a job that has to be done well, no matter whether someone sees it or not. Your service makes a difference for a nation at war, and improves the chances that one day we'll see a world at peace. (Applause.)

You will always be able to take pride in your service in the United States Navy and Marine Corps. (Applause and cheers.) This world can be messy and dangerous - but it's a world made better by American power and American values. The cause we serve is freedom. That cause is right. That cause is just. That cause will prevail.

Thank you. (Applause and cheers.)