For Immediate Release
Office of the Vice President
May 10, 2007

THE VICE PRESIDENT: Thank you very much, General...and let me say hello to the men and women of COB Speicher.

General, I want to thank you for the introduction, and thank all of you for that warm welcome. It's an honor to be with the men and women of the 25th Infantry Division and Task Force Lightning. 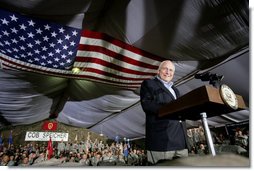 I'm here to say thanks for your service...for what you do for all of us and to let you know how impressed we are with the job you're doing every single day. You're part of a superb multinational force. You belong to a military that shows dedication and skill up and down the chain of command. So I'm honored to be with you in person. I bring greetings from the folks at home, from your commander in chief, President George W. Bush. (Applause.) Don't hold back. (Laughter and applause.)

We came in last night after a day in Baghdad, and I was fortunate to have breakfast with some members of the 25th Infantry Division this morning. I've just finished a briefing with our commanders. They've brought me up to date on operations, on our global - on our ongoing challenges, and on the performance of MND-North Central. It was a good report, and I come away with even more appreciation for all that you do, and greater confidence in the days ahead.

As members of an historic division of the United States Army, you're serving on a vital mission in a strategic part of the world. The job you're doing here has a direct impact on the security of the United States. The American people live in a safer country because of the work being performed by Task Force Lightning.

We're fighting a war against terror, and the 25th ID has carried out some of the hardest assignments in some of the most difficult situations. General Dave Petraeus said the "operational environment in Iraq is the most complex and challenging" he's ever seen. Extremists from inside and outside the country want to stir an endless cycle of violence, and al-Qaeda is operating and trying to open new fronts. Some seem to have no interest in seeing the emergence of a strong, secure and democratic Iraq. A violent minority is trying to tear down the institutions of peaceful self government the Iraqis are trying to build.

We are here because free nations have a duty to help struggling democracies - and because all nations have an interest in stability and peace in the Middle East.

We are here because America stands by our friends. The Iraqi people lived for a generation under a dictatorship of terror, mass murder, and secret police. When our armed forces liberated this country from the tyrant, we promised not to permit another dictatorship to rise in his place.

We are here, above all, because the terrorists who have declared war on America and other free nations have made Iraq the central front in that war. Osama Bin Laden and his lieutenants believe they can wear down the United States, that they can force us out, to make Iraq a safe haven for terror. They see this country as the center of a new caliphate, from which they can stir extremism and violence throughout the region...and eventually carry out additional attacks against the United States. 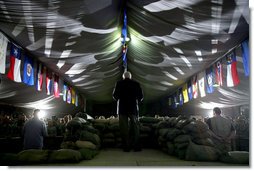 The terrorists have stated these ambitions clearly, and this is where they've decided to fight. The United States, also, has made a decision: As the prime target of a global war against terror, we will stay on the offensive. We will not sit back and wait to be hit again.

While the forces of violence inflict harm and grief on the Iraqi people, the citizens of this country have shown courage, and fortitude, and their own desire for freedom and self government. They defied assassins and car bombers to vote in three national elections. They have adopted the most progressive, democratic constitution in the Arab world. And they have elected men and women to lead this country on a path to reconciliation, to progress, and to peace.

Success in that effort depends on Iraq's leaders themselves, and the ultimate solution in this country will be a political solution. But that requires basic security, especially in Baghdad, where Americans are working beside Iraqi forces to carry out the new strategy. In our briefings, General Petraeus has underscored the fact that the enemy's tactics are barbaric...that we can expect more violence as they try to destroy the hopes of the Iraqi people. But he has also told me as well of the progress that's been made battling al-Qaeda, seizing weapons, and getting actionable intelligence. The job now is to persevere in every area of operations - from Baghdad, to Anbar Province, to the border areas. I think General Petraeus's own words put it best: "We cannot allow mass murderers to hold the initiative. We must strike them relentlessly. We and our Iraqi partners must set the terms of the struggle, not our enemies. And together we must prevail."

Nearly six years ago, the United States learned that dangers can accumulate on the other side of the world, and yet still strike us in our own country. We understand full well the nature of the enemy that struck America on 9/11, and we see their kind every day here in Iraq. They are men who want to seize power by violence, and impose their will through intimidation. They attack and torment people who want nothing more than to lead their lives in an atmosphere of peace and security. The United States is the kind of country that stands up to brutality, terror, and injustice. And you're the kind of people we depend upon to get the job done. (Applause.)

You serve in a unit of the Army organized to deploy anywhere in the world to conduct missions of warfare. When tough work needs doing, we look to tough units like the 25th ID. Many of you have had your deployments extended, and that puts an unexpected hardship on you and your families. I want you to know the extension is vital to the mission. The Army and the country appreciate the extra burden that you carry. Because of your willingness to serve today, our children and grandchildren will grow up in a better world - and you will be proud of your service for the rest of your lives. (Applause.)

You need to know that your country does not take you for granted - not for a single minute. We're grateful to your families back home, because they, also, are making sacrifices for America. While you're out here in the desert heat, and the dust, and the heavy winds, you're constantly in the thoughts of millions of your fellow citizens. We are grateful. We admire your service. And we look with confidence to the day the mission is completed - with honor, and with victory. (Applause.)