For Immediate Release
Office of the Vice President
May 9, 2007

THE VICE PRESIDENT: Well, I have enjoyed a good meeting with the Prime Minister this morning. We've talked about a wide range of issues here in Iraq as well as the region, focusing of course on things like the Baghdad security plan, ongoing operations against terrorists, as well as the political and economic issues that are before the Iraqi government. 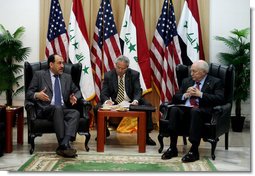 We've reviewed last week's neighbors conference in Egypt, which I think we believe went very well, and obviously talked about the way ahead in terms of our mutual efforts to help build an Iraq that is safe and secure, is self-governing and free of the threats of the insurgency and al Qaeda.

PRIME MINISTER MALIKI: (via interpreter) In the name of God, the Merciful, the Compassionate; my meeting with the Vice President of the United States, Mr. Dick Cheney, was positive and serious. We have discussed a variety of issues. We have discussed the efforts that are exerted and should be continued to be exerted to continue the solid relationship between the two countries and look at best ways to support the efforts of the Iraqi government in order to succeed in this experiment.

The meeting with the Vice President put the foundation for practical steps in order to support our efforts working on both the security front as well as the domestic political issues. We also have talked about regional issues and neighboring states. Thank you. 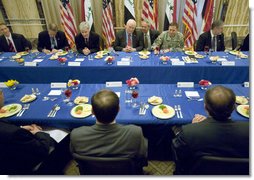