For Immediate Release
Office of the Vice President
May 9, 2007

THE VICE PRESIDENT: Well, obviously I've got General Dave Petraeus and our Ambassador Ryan Crocker with us. We spent most of the day together. It's been a good day. We met with virtually all the top Iraqi leaders. Might have missed one or two who were out of town, but we caught most of them, including Prime Minister Maliki and as well as President Talabani, Vice President Hashemi and al-Mehdi. 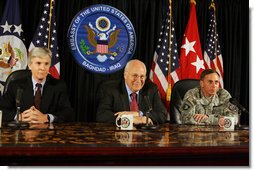 During the course of the meetings I emphasized the importance of making progress on the issues before us, not only on the security issues but also on the political issues that are pending before the Iraqi government. I was impressed with the commitment on the part of the Iraqis to succeed on these tasks, to work together to solve these issues.

I also met with their top military leadership. I think it's important for all of us to remember that the sacrifices that the Iraqis have made in this conflict have been substantial. I look forward tomorrow to have any opportunity to spend some time with our U.S. military forces.

And with that, we'd be happy to respond to questions. And the first question goes to Tom Raum.

QUESTION: Mr. Vice President, did you hear anything today that makes you believe that the benchmarks that have been set up are getting met any quicker than earlier? And if so, is there any possible (inaudible) tie the performance at meeting these benchmarks to getting funds from Congress, as some Democrats have suggested?

And General Petraeus, you said a few weeks ago in Washington that regardless of how things went, it would take an enormous commitment of time and effort on the part of the United States before things are stabilized. Do you still believe that?

THE VICE PRESIDENT: I'm not sure that was consistent with the rules, Tom, but what the heck. You got the first one, so we'll go with it.

With respect to the question of benchmarks, we still believe that it's important that funding for the supplemental for operations here in Iraq not contain conditions that limits either the flexibility of our commanders on the ground in Iraq or interferes with the President's constitutional prerogatives as Commander-in-Chief, which is the general principle that we've adhered to and it's one of the reasons the President vetoed the original bill.

I do sense today a - I think a greater awareness on the part of the Iraqi officials I talked to of the importance of their working together to resolve these issues in a timely fashion. I think they recognize that it's in their interest as well as in our interest that they make progress on the political front just as we deal with the security issues.

GENERAL PETRAEUS: Well, Tom, I do think it will require a substantial commitment to succeed in this endeavor and I think one of the interesting messages that the Vice President heard today from the Iraqi leaders and from the Iraqi military leadership in particular was their absolute determination to carry forward in the face of very significant terrorist activity.

QUESTION: Thank you, Mr. Vice President. I'm wondering how you feel the security situation here is doing compared to the last time you were in Iraq, and if you can give any serious assurances to the American public that things will, in fact, get better anytime soon.

THE VICE PRESIDENT: Well, I have to rely on reports like everybody else does, obviously. I've spent today here basically in our embassy and the military headquarters in the green zone, so I can't speak from personal experience in terms of what's going on all across Iraq.

I can say that based on the conversations I've had today, and most of those conversations were with Iraqis and Iraqi leaders - some of them in the government, some of them not - that they believe the situation has gotten better. They cite specifically the statistics on sectarian violence, Sunni-on-Shia and Shia-on-Sunni violence that they think is down fairly dramatically.

I think everybody recognizes there still are serious security problems, security threats; no question about it.

But the impression I got from talking with them - and this includes their military as well as political leadership - is that they do believe we are making progress, but we've got a long way to go.

GENERAL PETRAEUS: And they were all - all of them actually singled out Anbar province and the really dramatic shift in the Sunni population in Anbar province against al Qaeda Iraq in recent months as a heartening sign and actually as an example, that they are encouraging, be followed in other areas with similar populations.

QUESTION: Thank you very much. Ambassador Crocker said on the plane coming here that one of the messages you wanted to deliver was that any talk of a two-month summer recess by the Iraqi parliament was just unimaginable. Did you convey that, in fact, today to the leaders that you met and what was the response?

THE VICE PRESIDENT: I'd like to preserve to some extent on these trips the confidentiality, if you will, of my conversations with our host. I did make it clear that we believe it's very important to move on the issues before us in a timely fashion and that any undue delay would be difficult to explain and that we hoped they would approach these issues with all deliberate dispatch, if I can put it in those terms. I think they're somewhat sympathetic to our concerns.

QUESTION: Mr. Vice President, following on that if I could first, are you confident that the Iraqis now will not take this two-month break from your conversations?

QUESTION: And if I could, General Petraeus, you're going to give a progress report in September. A lot of people in Congress are now pinning that as something to look to to pin funds to. Would that harm your ability to fight this war on the ground?

GENERAL PETRAEUS: Well, first of all, let me just say that that's going to be a joint endeavor. This is going to be the Ambassador and myself offering that assessment to our leaders in Washington and to the congressional leadership.

We see that as presenting an assessment at that time. I have offered that it will take several months after all the forces are on the ground, which will be around the mid-June time frame, for us to see the impact of those forces. The Iraqis are also continuing to build their forces. That's part of both the deliberate effort that's been underway for some time and their own surge, if you will. Some 9,000 Iraqi soldiers graduate from training this month alone, just to give you an example.

So we see that as a time where we'll have had, we think, enough of a period to assess the joint security effort and the progress in the political and economic arena. And I'll let the Ambassador perhaps add to that as well.

QUESTION: But as far as funding and tying it to that is the question.

AMBASSADOR CROCKER: Well, certainly from the political-economic side, just as is the case with the military, our people need the tools to get the job done. And the tools in this case are money. We really need to get the money out here so we can start making a difference on the streets.

QUESTION: Thank you, sir. You said you were impressed by the responses that you heard from Prime Minister Maliki and his colleagues. Did they offer any specific commitments, particularly time commitments, in moving forward on some of the specific measures that you and other American officials have talked about; namely, hydrocarbon law, de-Baathification, provincial elections and constitutional reform?

THE VICE PRESIDENT: I believe that Prime Minister Maliki plans an address to the parliament this week on many of these issues - [cough] excuse me - and, of course, it's a political process that depends upon action by their legislative body. And but as I say, I do believe that there is a greater sense of urgency now than I'd seen previously.

QUESTION: But no specific time commitments?

THE VICE PRESIDENT: It's difficult to do with our own Congress, let alone somebody else's.