For Immediate Release
Office of the First Lady
May 9, 2007

MRS. BUSH: Good afternoon, everyone. So good to see you all. I want to welcome everyone to the White House -- members of the Cabinet that are here, members of the Congress that have joined us, many members of the administration. Thank you for joining us today. We've had a very interesting and a historical week, which is a nice thing to do when -- ended the middle of the week in the Royal visit with this chance for us to talk about our own history and ways we can protect it. As all of you know, Queen Elizabeth was here for the 400th anniversary of Jamestown, one of our oldest and most iconic settlements in our country, and that was really fun. So today it's interesting and fun for us to have the chance to be together to recognize other historical preservation sites and areas in our country. 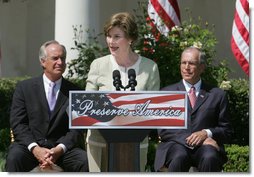 Distinguished guests, thank you all very much for coming.

In 2003, President Bush launched the Preserve America Initiative to encourage communities to protect our cultural and natural heritage. The goals of the initiative include a greater shared knowledge of our nation's past, strengthened regional identities and pride, increased local participation in preserving our country's cultural and natural heritage, and support for the economic vitality of our communities.

Over the last four years, the initiative has awarded 68 grants to 68 excellent preservation organizations like The Mount, the home of Edith Wharton, which I got to visit last spring.

And each one of us know how important an excellent history teacher is to our love of history. A lot of us can really trace our love of history back to a wonderful teacher who made history come alive -- maybe it was a parent also who loved history and loved to tell stories about it. So thank you all for your great work inspiring kids.

Since President Bush announced the initiative, more than 600 cities and towns have applied to become Preserve America Communities; 486 communities have been honored with this distinction.

Last October, a Preserve America Summit was held in New Orleans to mark the 40th anniversary of the National Historic Preservation Act, and many of the organizations and groups that are here today were also our partners in that summit.

The National Historic Preservation Act was signed by President Johnson in 1965, and the act launched the first coordinated federal effort to safeguard our country's heritage. At the Preserve America Summit, we took stock of the strides we've made over the last four decades. We learned how businesses and foundations, educational institutions, governments and private citizens -- what they can do to modernize our preservation efforts so that we can be more effective in the future. 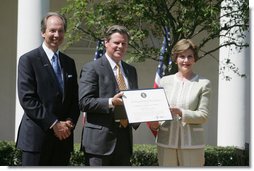 The Advisory Council on Historic Preservation evaluated scores of ideas that emerged from that summit, and they've recommended 12 proposals to help fill our obligations to care for the treasures we've inherited. And I know that with the ACHP's meeting in the next couple of days, these proposals will be discussed and approved.

One of our most important obligations, though, is making sure that the next generation carries on this preservation work after us. During the Preserve America Summit, I attended a youth program sponsored by Save Our History, one of today's award recipients. High school students spoke of how much they had enjoyed hands-on preservation projects in their own communities -- from revitalizing Denver's historic Colfax Avenue, to restoring a traditional African American home in La Marque, Texas. The ACHP will officially make our country's next generation of preservationists a top priority at their meeting tomorrow.

Today, we honor the terrific work of this year's Preserve America Presidential Award winners. Presenting the awards is the Chairman of the Advisory Council on Historic Preservation, and a serious history buff himself, John Nau, and he'll be joined in the presentations by the Secretary of Interior, Dirk Kempthorne.

Since one of our winners is San Diego's USS Midway Museum, a World War II-era aircraft carrier that preserves the history of our naval battles in the Pacific, I should mention that Secretary Kempthorne and I visited Midway Island in March. Midway is one of the islands in the Northwest Hawaiian Island chain that President Bush declared a national marine monument last year. This declaration protects 140,000 square miles of pristine waters and thousands of rare aquatic species that live there.

On Midway Island, Secretary Kempthorne and I saw the World War II-era military installations that are there, and we also saw marine and bird life that's found nowhere else on Earth. We fed seals, we banded birds, and we planted native grasses. And in fact, Secretary Kempthorne even refereed a wrestling match between a White House official and Laysan albatross. (Laughter.) The Secretary was a great travel companion, and I'm delighted that he'll be here to help present these awards today. 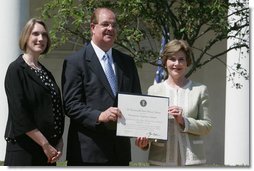 I know I speak for President Bush when I congratulate each one of you, each of our Preserve America Presidential Award winners. So to begin the presentations, please welcome John Nau. (Applause.) 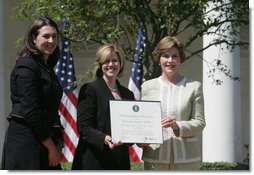 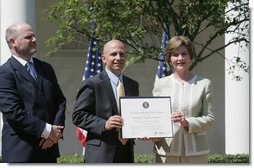