For Immediate Release
Office of the First Lady
May 7, 2007

Entertainment at the State Dinner in Honor of Her Majesty Queen Elizabeth II and His Royal Highness The Prince Philip, Duke of Edinburgh


Entertainment in the East Room

Born in Israel in 1945, Itzhak Perlman completed his initial training as a violinist at the Academy of Music in Tel Aviv, Israel. He came to New York and was propelled into the international arena by appearing on "The Ed Sullivan Show." Following his studies at the Juilliard School, he won the prestigious Leventritt Competition in 1964. Since then, Mr. Perlman has appeared in countless recitals and festivals, and as a soloist with every major orchestra throughout the world. He participated in historic concerts with the Israel Philharmonic Orchestra as they made their first appearances in Warsaw, Budapest, the Soviet Union, China and India. In recent years, he has delighted many audiences as a conductor as well. 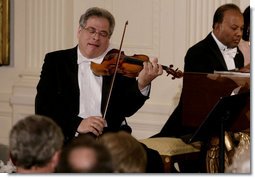 Among Mr. Perlman's many awards are four Emmys and fifteen Grammys. In 2000 he received the National Medal of Arts from President Clinton, and in 2003 he was one of the Kennedy Center Honors recipients in recognition of his many distinguished achievements.

Mr. Perlman devotes considerable time to education. His most recent Emmy award was for the PBS documentary "Fiddling for the Future," a film about his work as a teacher and conductor in the Perlman Summer Music Program. At Juilliard, where he also teaches, he was awarded an honorary doctorate and a Centennial Medal on the occasion of the school's 100th commencement ceremony in May 2005.

Mr. Perlman's presence on stage, on camera, and in personal appearances of all kinds speaks eloquently and triumphantly on behalf of persons with disabilities, and his devotion to their cause is an integral part of his life.

The U.S. Army Chorus was established in 1956 as the vocal counterpart of The U.S. Army Band, "Pershing's Own." From its inception, the Chorus has maintained a reputation of excellence and a broad repertoire, singing music in many genres and languages. The Chorus often performs at the White House and is a standard feature of each Presidential inaugural. 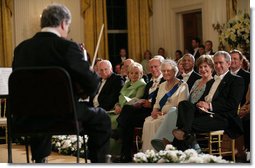