For Immediate Release
Office of the Press Secretary
May 4, 2007

PRESIDENT BUSH: Mr. Prime Minister, thank you. Welcome back. Every time I visit with the Prime Minister of our friend, Singapore, we have a strategic dialogue.

And today, I talked to Prime Minister Lee about America's desire to stay in close contact with not only Singapore, but our partners in what we call the ASEAN nations -- those would be Southeast Asian nations. 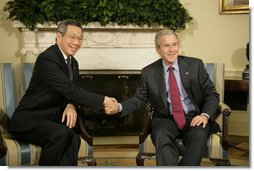 To this end, the Prime Minister has invited me, and I've accepted an invitation to go back to Singapore to talk to our partners and friends about trade and security, and we'll do so on my way to the APEC meetings in Australia. So thanks for the invitation in September.

We talked about the Iranian issue; we, of course, talked about North Korea. There is no better person to talk about the Far East with than Prime Minister Lee. He's got a very clear vision about the issues, the complications, and the opportunities.

And so I welcome you back, and thanks so much for the amount of time that you're willing to give.

PRIME MINISTER LEE: Well, thank you, President Bush. We had a very good discussion. Our bilateral ties between Singapore and America are in very good repair, so we spent very little time discussing that. But I thanked the President for the steadfastness and resolve with which he's tackling the very complicated problems in the Middle East and Iraq, as well as the Israel-Palestinian issue.

It's critical for us in Southeast Asia that America does that. And the President continues to give strong leadership on that because it affects America's standing in Asia and the world, and also the security environment in Asia because extremists, the jihadists, watch carefully what's happening in the Middle East and take heart, or lose heart, depending on what's happening.

We discussed America's relations in Asia, with China, with Japan, and Korea. Those two are important to Southeast Asia because they set the context within which Southeast Asia can prosper, and good relations between America and the major countries, China and Japan, are critical because the Southeast Asian countries want to be friends with both and do not want to have to choose sides with either.

Within Southeast Asia, I encouraged the President to deepen and strengthen the already good ties with -- between the Southeast Asian countries, ASEAN, and America, both as a group and also bilaterally, individually with single countries. The President is going to come to Singapore for the commemorative 30th anniversary meeting of the dialogue between ASEAN and the United States, and I suggested to the President that we should consider suitable new initiatives which perhaps would be able to take our relations another step forward.

But overall, the relations are in good repair. More can and will be done. But I look forward to deepening and strengthening not just relations, but also the friendship between our two countries.

PRESIDENT BUSH: Thank you, Mr. Prime Minister. Thank you all. Thank you.