For Immediate Release
Office of the Press Secretary
May 4, 2007

THE PRESIDENT: Thank you all. Please be seated. Siéntese. Bienvenidos. Thank you for coming. Welcome to El Jardin de las Rosas. It's a great place to celebrate Cinco de Mayo. As a matter of fact, I've been looking forward to celebrating this so much that we decided to have our own Cuatro de Mayo. (Laughter.) 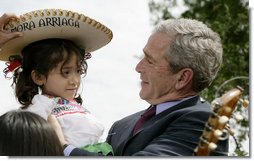 Thanks for coming. Welcome. I'm honored to celebrate this important holiday with you all. On Cinco de Mayo, we remember our close friendship with Mexico, and we honor and remember the many contributions Mexican Americans have made to our nation.

I'm sorry Laura couldn't be here. She's coming back from having camped out in a national park with high school classmates. I'm honored to be here with the Attorney General of the United States, mi amigo, Alberto Gonzales. (Applause.) Y tambien, the Secretary of Commerce, Carlos Gutierrez. (Applause.) Y su esposa, Edi. (Applause.) I'm glad to be here with Dr. Emilio Gonzalez, Director of U.S. Citizenship and Immigration Services, and Gloria. (Applause.) I appreciate my friend Emilio Estefan for arranging this entertainment here in the Rose Garden. I welcome the Ambassador to Mexico, Arturo. Bienvenidos. I'm glad you're here. Thanks for coming. (Applause.)

I want to thank those who wear the uniform of the United States. Thank you for serving. (Applause.)

Cinco de Mayo celebrates a great Mexican victory at the battle of Puebla. On May 5, 1862, an outnumbered band of Mexican soldiers held their ground against a professional European army. They triumphed against overwhelming odds. The victory inspired Mexican patriots in their heroic fight for liberty, and for democracy. Cinco de Mayo is a joyful day in Mexican history, and it's an important milestone in the history of freedom.

The people of the United States are proud to celebrate Cinco de Mayo with our Mexican neighbors. Our two countries continue to stand for the principles that the Mexico army defended at Puebla. We believe that democracy represents the true will of people. We believe that freedom is God's gift to every man, woman and child on the face of this Earth. (Applause.)

We believe that both our nations have a responsibility to share the blessings of liberty. The United States and Mexico are bound by strong family ties. Mexican Americans have enriched our culture by sharing their musical and artistic talents. They've strengthened our economy by opening new businesses and expanding trade. And they have made our nation more hopeful by leading lives of faith and family. 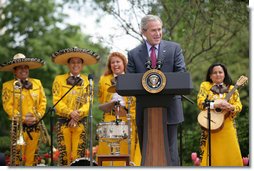 Mexican Americans have also defended the United States by wearing our nation's uniform. Today, Mexican Americans in uniform answered the call to advance the cause of liberty, and this nation is really grateful for your service and your sacrifice. (Applause.)

The patriotism of Mexican Americans reminds us that one of our greatest strengths is the character and diversity of our nation's immigrants. Immigration has made our land a great melting pot of talent and ideas. It has made America a beacon of hope for people in search of a better life.

We must address all elements of this problem together, or none of them will be solved at all. We must do it in a way that learns from the mistakes that caused previous reforms to fail. I support comprehensive immigration reform that will allow us to secure our borders and enforce our laws, to keep us competitive in the global economy, and to resolve the status of those already here, without amnesty and without animosity.

The United States and Mexico share a great border, and we share a hopeful future. Tomorrow, people on both sides of that border will celebrate freedom and the courage of all who defend it. I wish you a happy Cinco de Mayo. Que Dios los bendiga a las Estados Unidos y tambien Mexico. (Applause.) 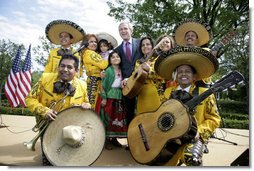