For Immediate Release
Office of the Press Secretary
May 2, 2007

PRESIDENT BUSH: It is my honor to welcome the President of Yemen to the Oval Office. I have gotten to know the President over the past six years of my presidency. I feel comfortable saying, welcome, my friend.

I had the privilege of calling President Saleh after the elections of Yemen. I told him, I said it was a remarkable occurrence that his great country had a free and open election. I've had a chance to congratulate him and thank him in person today. 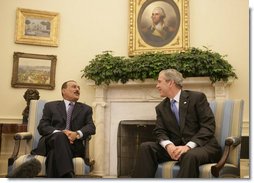 We had a very good discussion about the neighborhood in which the President lives. And we spent a lot of time talking about our mutual desire to bring radicals and murderers to justice. And I thanked the President for his strong support in this war against extremists and terrorists.

So I'm glad you're here.

PRESIDENT SALEH: (As translated.) Thank you very much, Mr. President, for the good reception and hospitality, and also for the excellent and fruitful talks that we had. I'm very pleased for the limitless support by President Bush and the United States for Yemen in the field of combating terror. Yemen is an essential partner of the United States of America and the international community in combating terror. We will continue in this path, on this track.

We had the chance to discuss a number of issues with Mr. President, including a number of issues in the Middle East region, the Palestinian-Israeli problem, the situation in Somalia, the situation in Iraq, Lebanon, Afghanistan. We found a complete understanding on the issues that we have discussed with Mr. President Bush. We also discussed the bilateral relations between Yemen and the United States.

I would like on this occasion to highly express my gratification and my appreciation for the brave position taken by President Bush since the first moment he took power in this country, since he expressed his belief in the establishment of an independent Palestinian state, side by side with the state of Israel. And I wish that His Excellency would pursue his effort and will continue his effort in implementing the Arab initiative which was adopted in the summit of Beirut to maintain peace in the region. I am sure that adopting such initiative would end 70 percent of the problems in the region.

Of course, you will be in history if you can be successful in establishing the independent Palestinian state before leaving the White House.