For Immediate Release
Office of the Press Secretary
May 1, 2007

THE PRESIDENT: Good evening. Twelve weeks ago, I asked the Congress to pass an emergency war spending bill that would provide our brave men and women in uniform with the funds and flexibility they need.

Instead, members of the House and the Senate passed a bill that substitutes the opinions of politicians for the judgment of our military commanders. So a few minutes ago, I vetoed this bill. 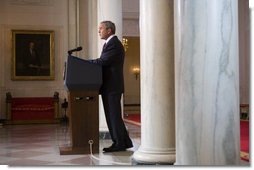 Tonight I will explain the reasons for this veto -- and my desire to work with Congress to resolve this matter as quickly as possible. We can begin tomorrow with a bipartisan meeting with the congressional leaders here at the White House.

Here is why the bill Congress passed is unacceptable. First, the bill would mandate a rigid and artificial deadline for American troops to begin withdrawing from Iraq. That withdrawal could start as early as July 1st. And it would have to start no later than October 1st, regardless of the situation on the ground.

It makes no sense to tell the enemy when you plan to start withdrawing. All the terrorists would have to do is mark their calendars and gather their strength -- and begin plotting how to overthrow the government and take control of the country of Iraq. I believe setting a deadline for withdrawal would demoralize the Iraqi people, would encourage killers across the broader Middle East, and send a signal that America will not keep its commitments. Setting a deadline for withdrawal is setting a date for failure -- and that would be irresponsible.

Second, the bill would impose impossible conditions on our commanders in combat. After forcing most of our troops to withdraw, the bill would dictate the terms on which the remaining commanders and troops could engage the enemy. That means American commanders in the middle of a combat zone would have to take fighting directions from politicians 6,000 miles away in Washington, D.C. This is a prescription for chaos and confusion, and we must not impose it on our troops.

Third, the bill is loaded with billions of dollars in non-emergency spending that has nothing to do with fighting the war on terror. Congress should debate these spending measures on their own merits -- and not as part of an emergency funding bill for our troops.

The Democratic leaders know that many in Congress disagree with their approach, and that there are not enough votes to override a veto. I recognize that many Democrats saw this bill as an opportunity to make a political statement about their opposition to the war. They've sent their message. And now it is time to put politics behind us and support our troops with the funds they need.

Our troops are carrying out a new strategy with a new commander -- General David Petraeus. The goal of this new strategy is to help the Iraqis secure their capital, so they can make progress toward reconciliation, and build a free nation that respects the rights of its people, upholds the rule of law, and fights extremists and radicals and killers alongside the United States in this war on terror. 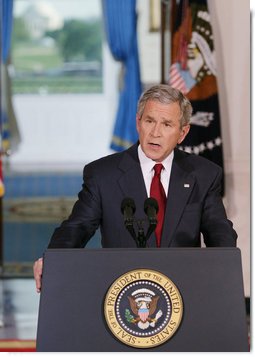 In the months since our military has been implementing this plan, we've begun to see some important results. For example, Iraqi and coalition forces have closed down an al Qaeda car bomb network, they've captured a Shia militia leader implicated in the kidnapping and killing of American soldiers, they've broken up a death squad that had terrorized hundreds of residents in a Baghdad neighborhood.

Last week, General Petraeus was in Washington to brief me, and he briefed members of Congress on how the operation is unfolding. He noted that one of the most important indicators of progress is the level of sectarian violence in Baghdad. And he reported that since January, the number of sectarian murders has dropped substantially.

Even as sectarian attacks have declined, we continue to see spectacular suicide attacks that have caused great suffering. These attacks are largely the work of al Qaeda -- the enemy that everyone agrees we should be fighting. The objective of these al Qaeda attacks is to subvert our efforts by reigniting the sectarian violence in Baghdad -- and breaking support for the war here at home. In Washington last week, General Petraeus explained it this way: "Iraq is, in fact, the central front of all al Qaeda's global campaign."

Al Qaeda -- al Qaeda's role makes the conflict in Iraq far more complex than a simple fight between Iraqis. It's true that not everyone taking innocent life in Iraq wants to attack America here at home. But many do. Many also belong to the same terrorist network that attacked us on September 11th, 2001 -- and wants to attack us here at home again. We saw the death and destruction al Qaeda inflicted on our people when they were permitted a safe haven in Afghanistan. For the security of the American people, we must not allow al Qaeda to establish a new safe haven in Iraq.

We need to give our troops all the equipment and the training and protection they need to prevail. That means that Congress needs to pass an emergency war spending bill quickly. I've invited leaders of both parties to come to the White House tomorrow -- and to discuss how we can get these vital funds to our troops. I am confident that with goodwill on both sides, we can agree on a bill that gets our troops the money and flexibility they need as soon as possible.

Here in Washington, we have our differences on the way forward in Iraq, and we will debate them openly. Yet whatever our differences, surely we can agree that our troops are worthy of this funding -- and that we have a responsibility to get it to them without further delay.

Thank you for listening. May God bless our troops.