For Immediate Release
Office of the First Lady
April 29, 2007

MRS. BUSH: Thank you all very much. Thank you, Jock, very much for your great work that you do as Superintendent of Zion National Park. I want to recognize Secretary Dirk Kempthorne, who is with us today, from the U.S. Department of Interior. Lieutenant Governor Gary Herbert -- Governor, thank you so much for joining us, and your wife and son, thank you all for being here. Mayor Pat Cluff, Mayor of Springdale, thank you for joining us, Mayor. Barbara Pahl, who is the Regional Director of the National Trust for Historic Preservation. Barbara's the Regional Director in Denver, and thank you so much, Barbara, for joining us today here in Utah. 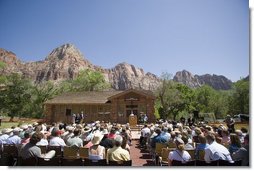 A special recognition to Lora Tom, who is the Chairwoman of the Southern Band of the Paiute. Thank you very much for being with us today. And the person who introduced himself as a "fossil" from Zion, the historian around here, J.L. Crawford. Thank you so much, Mr. Crawford. (Applause.)

And the Red Rock Rondo, you were terrific. That was a really wonderful way to be welcomed here to Zion.

One person who wishes she could be with us today is Mary Bomar, who is the Director of the National Park Service. Mary today is in Eads, Colorado, dedicating the Sand Creek Massacre National Historic Site. This site will become our country's 391st national park. We congratulate the people of Eads, Colorado on this distinction, and I know Mary Bomar sends her very best wishes to everyone here at Zion.

Local officials, preservationists, conservationists, park enthusiasts, history buffs, distinguished guests, I'm so happy to be with you this afternoon in one of our country's most spectacular national parks.

All of us can remember the first time we were amazed by a national park, and if you grew up here, then I know this is the site that first amazed you. My love of our national parks began when I visited Carlsbad Caverns, New Mexico, which was the closest national park to Midland, Texas, where I grew up.

Now I hike in a national park every year with childhood friends of mine. We began this tradition on our 40th birthday by taking the river -- the float trip down the Colorado River, and then hiking out the 10 miles on the South Rim of the Grand Canyon. Since then, we've visited some of our country's most magnificent parks. We've been to Yosemite and Glacier, Yellowstone, Denali and Olympic.

Recently, we took our daughters and did that Grand Canyon trip one more time. And we found that 20 years after that first visit, it was a lot harder to hike out those 10 miles. (Laughter.) Our girls were very great about it, though. They finished in four hours, and the old mothers made it out in about seven. 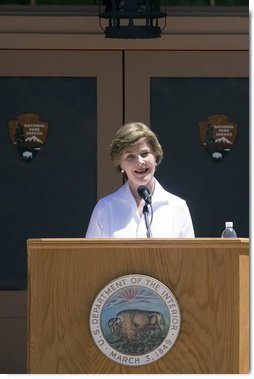 This week, we're going to explore this national park. We're going to see Zion's sweeping plateaus and some of the world's most scenic canyons. My friends are here on the front row with me that I hike with every year. And so we're really looking forward to this opportunity to be together, and be together in this beautiful park. (Applause.)

I'm also looking forward to learning about Zion's fascinating past. Twelve-thousand years ago, men hunted mammoth, giant sloth and camels here long before man started to record his history. You can still read the rich natural history of this region in the 240 million years of geology preserved in the walls of Zion's gorgeous and towering walls.

At Zion, as in the parks throughout the United States, dedicated park rangers and volunteers work every single day to preserve these treasures for all of Americans to enjoy, for all of us, and for each generation that comes after us.

Preservation is an issue that President Bush and I care about. In 2003, he announced the Preserve America Initiative to encourage communities to safeguard our cultural and natural heritage. Preserve America helps boost local economies, because recognized landmarks attract visitors and businesses.

In the four years since President Bush announced the initiative, we've honored historical organizations, history teachers, and 486 communities for their preservation work. Eleven of those communities are here in Utah.

An important goal of Preserve America is to educate Americans to be good stewards of our national treasures, and that's what you're doing here at Zion.

In Zion's peak season, the park welcomes 11,000 visitors a day. They come for the sport of canyoneering. They come to learn about this park's abundant plant life -- from the Utah Beavertail Cactus to the Bigtooth Maple to the Pigsweed Shrub. They come to learn more about the 290 species of birds that fly through Zion every year. They learn about the traditions of the Virgin Anasazi and the Paiute peoples who have called the lands of Zion home.

By preserving this history, Zion National Park also provides a connection between early Native Americans and their descendents, who still live here in the Southwest. 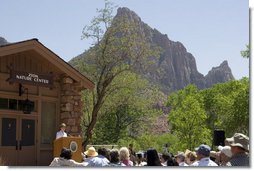 Zion has an especially proud tradition of educating young park visitors through the Junior Rangers program. Through Junior Rangers, young people can explore our parks with activities especially designed for children -- from specially guided park tours to wildlife coloring books.

At nearly 300 parks and monuments across the United States, children learn about our country's history, our spectacular landscapes, and our wildlife. Some, we hope, will be inspired to grow up to be real park rangers.

Yesterday was the first-ever Junior Rangers Day. This nationwide celebration capped off National Park Week by bringing children from across the United States into our parks and monuments, and millions more children participated online as Web Rangers.

Zion National Park has one of the oldest Junior Rangers programs in the national park system. Since 1974, the Nature Center has hosted activities to educate young visitors about the history, geology and ecology of Zion.

The Junior Rangers program is one of Zion's most popular projects. Last year, more than 7,000 young people participated. And this gives me the chance to urge everyone across our country, all parents, to bring your children to your local national park, just like my mother took me to Carlsbad Caverns, and then to take your children to our other parks around the United States. You'll make really wonderful, happy memories for them if you do that.

Today, I'm delighted to be part of the rededication of the Zion Nature Center, which will now be open to Junior Rangers year-round. This former cafeteria building also happens to be one of the best examples of Gilbert Stanley Underwood's rustic architecture. Through your improvements to the center, you've shown your commitment to preserving our country's history, and you'll help encourage America's next generation to be good stewards of the treasures they inherit.

Giving all Americans a sense of responsibility for our shared national heritage is vital to the health of our national parks. In 2009, Zion will celebrate a "Century of Sanctuary," to commemorate when these lands were first set aside by President Taft in 1909. Today, President Bush is asking individual citizens to make sure Zion -- and all our national parks -- will be preserved and enhanced throughout the next 100 years. Secretary Kempthorne will tell you more about the President's Centennial Initiative in a minute. 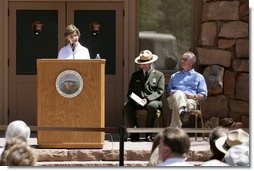 The Zion community's work to protect the natural, cultural and historical treasures of many centuries, while eagerly sharing them with the world, represents the best of our national parks. And it represents the generous spirit of our country.

Thank you for your efforts. Congratulations on the reopening of your Nature Center. I wish you the very best for this new facility and for the great work you'll continue to do here at Zion. (Applause.)

Now I'd like to introduce someone who's an extraordinary steward of our country's resources. I've been privileged to travel with him to some of the most spectacular sights in the United States, and on the planet. Most recently, we explored the fascinating marine and bird life of the Northwest Hawaiian Islands, by making a trip to Midway Island. President Bush declared the Northwest Hawaiian Islands -- its 140,000 square miles of marine and island life -- a National Marine Monument last year. (Applause.)

Secretary Kempthorne -- in addition to being an enlightening travel companion -- is also a huge enthusiast of our national parks. Ladies and gentlemen, our Secretary of the Interior, Dirk Kempthorne. (Applause.)