For Immediate Release
Office of the Press Secretary
April 28, 2007 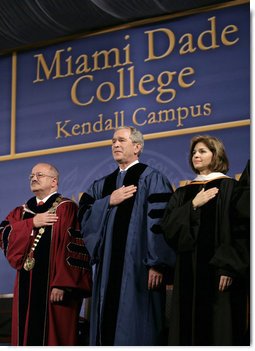 This is a joyous day for the graduating class at Miami Dade College. Yet on campuses across America, our thoughts turn to the students and faculty and staff at Virginia Tech. We remember lives cut short, teachers taken from their students, and young men and women who will never attend their commencement ceremonies. Members of the Miami Dade community share this sense of loss. One of the young victims was a former Miami Dade student who transferred to Virginia Tech -- Daniel Cueva. Daniel's family knows, or should know, that we pray for them today, and we offer our comfort to the families who grieve the loss of a loved one during this commencement season.

It is always a pleasure to be back here to Miami, and I thank Dr. Padron for asking me. It hasn't escaped my attention that when you were looking for Bushes to invite -- (laughter) -- I came in fourth. (Laughter.) Laura spoke at your North Campus commencement in 2004, my mother spoke -- (laughter) -- brother Jeb has spoken here twice. (Laughter.) Before I stepped on the stage, I asked him for some advice. I said, Jeb, give me some advice. He said Floridians hold their politicians to strict term limits: eight years for a governor, and fifteen minutes for a commencement speaker. (Laughter.) I will do my best.

The members of the Class of 2007 have worked hard for this day. When you arrived on this campus, you set a goal for yourselves -- and you met that goal with determination and discipline. Today you are leaving this fine college with a degree with your name on it, and a promise of a better future. And I congratulate you on this important achievement. (Applause.) 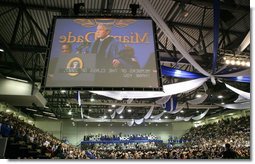 To reach this day, you also had the support of loving families. Many of you had moms and dads who sacrificed to put you through school and to give you this opportunity. Others of you put yourselves through school while providing for your own families. Those of you with young children found yourselves keeping tabs on two sets of homework -- yours and theirs. I ask all the families -- the moms and dads, husbands and wives, sons and daughters, to receive -- to stand and receive the thanks of the Class of 2007. (Applause.)

As this graduating class goes forward, you enter a world of unbounded opportunity. America's economy is prospering, our trade with the world is flourishing, and new possibilities are opening every day. And the key to unlocking those possibilities is a good education.

Here at Miami Dade, the college administration has teamed with local industries -- from healthcare, to aviation, to information technology -- to make sure the students who leave here do so with the skills that will enable them to succeed. The school slogan is "opportunity changes everything." And in newspapers and billboards and buses around this city, people can see how high you can rise with a degree from Miami Dade.

Today you join their ranks as proud graduates of this fine college. If you leave here determined to succeed, as they did, you will achieve your dreams, as well. I ask you to dream big, to be confident in your future, and use the diploma you receive today to stake your claim in this land of opportunity. (Applause.)

The opportunities of America make our land a beacon of hope for people from every corner of the world. It says something about this college that more than half of the students were raised speaking a language other than English. Some of you are the children and grandchildren of immigrants -- who risked everything to give you opportunities they never had. Others of you are immigrants yourself, who came to this country with the hope of a better life and the determination to work for it. Over the years, this school has helped open the door for opportunity for hundreds of thousands of immigrants -- and that is why Miami Dade proudly calls itself Democracy's College. (Applause.) 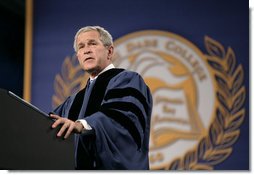 This college has had a significant impact on thousands of our citizens. Take, for example, Gwen Belfon, who graduates today. As a single mother in Trinidad and Tobago, Gwen dreamed of attending college. But she put her own dreams on hold to raise her four children. A few years ago, Gwen came to the United States and enrolled at Miami Dade. Today this proud mother fulfills a lifelong dream. When Gwen crosses the stage this afternoon, she will receive her associate's degree in education. And she's not done yet. Next January, she will return to Miami Dade to start on her bachelor's degree. (Applause.)

Another immigrant who knows what a Miami Dade degree can do is the president of this college, Dr. Padron. At age 15, he left his home and family in Cuba for a new life in the United States. (Applause.) He arrived with a desire to learn, and a will to succeed. At Miami Dade, he earned a degree in economics, while still learning the English language. Today, he is the first President of this college to speak English as a second language. Some people might say I am the first President of the United States who can make the same claim. (Laughter and applause.) Dr. Padron has gone on to serve as a leader in the academic community, and an inspiring example for immigrants studying at this school today.

Immigrants like Gwen and Eduardo Padron came from different countries, at different times, under different circumstances. They are evidence that in America, your origins matter less than your dreams. They prove that if you work hard, and make a commitment to learning, you will find that the doors have a way of opening for you. So my call is this: Use the degree you earn today as the first step in a lifetime of learning. By doing so, you will build a brighter future for yourselves and your families, and help maintain the promise of the United States of America. (Applause.)

Over the years, America's ability to assimilate new immigrants has set us apart from other nations. What makes us Americans is a shared belief in democracy and liberty. And now our nation faces a vital challenge: to build an immigration system that upholds these ideals and meets America's needs in the 21st century.

We must address all elements of this problem together, or none of them will be solved at all. And we must do it in a way that learns from the mistakes that caused previous reforms to fail. I am a strong supporter of comprehensive immigration reform that will allow us to secure our borders and enforce our laws once and for all, that will keep us competitive in a global economy, and that will resolve the status of those who are already here, without amnesty, and without animosity. (Applause.)

At Miami Dade, you know firsthand the contributions that immigrants make to our country. You see every day the values of hard work, and family, and faith that immigrants bring. This experience gives you a special responsibility to make your voices heard. One of the great strengths of America is that the most important issues are decided by the will of the people. That's why an educated citizenry is so vital to the success of our country. As graduates of Miami Dade, you are well-equipped to make a contribution to these vital debates. Speak out on the issues that matter to you. Participate in your nation's civic life. By taking part in American democracy, you will be active and responsible citizens, and you will make our country stronger. (Applause.)

Many of the graduates of the Class of 2007 have roots in countries where the opportunity to participate in an open debate does not exist. One of those countries lies just 90 miles from our shores, on the island of Cuba. (Applause.) In Havana and other Cuban cities, there are people just like you who are attending school, and dreaming of a better life. Unfortunately, those dreams are stifled by a cruel dictatorship that denies all freedom in the name of a dark and discredited ideology.

Some of you still have loved ones who live in Cuba, and wait for the day when the light of liberty will shine upon them again. That day is nearing. (Applause.) The reign of every tyrant comes to an end, yet the desire for freedom is never-ending. (Applause.) In Cuba and across the world, all who struggle for freedom have a friend in the United States, and we will stand with them until that struggle is won. (Applause.)

The advance of liberty is the great story of our time. Some of your fellow students have played an important part in that story. Hundreds of veterans of the United States Armed Forces are taking classes at Miami Dade. (Applause.) Sixteen veterans graduate from this campus today. We thank all these brave men and women for their service, and for their courageous decision to wear the uniform of the United States of America. (Applause.)

One of those veterans is a young man named Jimmy Zapata. Jimmy's family emigrated from Colombia when he was 14. After he finished high school, he enlisted in the United States Marine Corps. In 2003, Sergeant Zapata helped provide convoy security and supplies for units pushing toward Baghdad as a part of Operation Iraqi Freedom. Sergeant Zapata fought for his adopted country with honor and valor. He has earned the gratitude of his nation, and today he earns his associate's degree from Miami Dade College. (Applause.) The United States will always be proud to have immigrants like Sergeant Zapata, and I know Miami Dade will always be proud to call him one of your own. (Applause.)

I ask every member of the Class of 2007 to learn from Sergeant Zapata's example -- step forward to serve a cause larger than yourself. Volunteer in a local soup kitchen or shelter. Take time to check in on an elderly neighbor. Be a mentor to a child in need. Use the skills you have learned here to help build a better nation. Our armies of compassion need men and women like you. The great test of this generation will be how you answer the call to extend the promise of America, and make our nation a more hopeful place for all. The character of the Class of 2007 gives me great faith in your success, and confidence in the future of a nation that makes one people from out of many.

Congratulations on your achievement. Que Dios les bendiga. May God bless you.