For Immediate Release
Office of the First Lady
April 27, 2007

MRS. BUSH: Thank you everyone. Thanks so much. Please be seated. Thank you all very, very much. And Ruth, thank you for the very kind introduction. I know the Salvation Army knows what every single person in Dallas knows, and that is, if you want to be successful, ask Ruth Altshuler to be a part of your team. (Applause.) 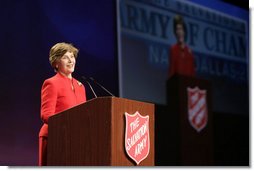 I really was not going to talk about the Laura Bush Foundation for America's Libraries, but I do want to tell you that I asked Ruth to be on my board, and we've been very successful. And I want thank Ruth very, very much for everything she's done.

The Schweitzer quote she used is really about her. She's the example. And she's the example to women all over Dallas and all over Texas. And Ruth, thank you very, very much for setting such a great example for all of us. (Applause.)

National Advisory Board members, volunteers, leaders, and staff of the Salvation Army, thank you for the very, very warm welcome home to me, to Dallas. I'm delighted to be with you, and I'm thrilled that Ruth gave me this opportunity to speak, because today, I have the chance to thank you in person for the important work you're doing for our country.

The Salvation Army helps carry out many of the President's initiatives to serve the needy -- across the United States, and in countries around the world. In Africa, the Army has distributed mosquito nets through the President's Malaria Initiative, and has supported life-saving projects through the President's Emergency Plan for AIDS Relief. Army members also serve the poor through programs run by the White House Office of Faith-Based and Community Initiatives. President Bush and I thank you very, very much. (Applause.)

This week, 2,500 of you have gathered to build on this proud tradition of service. The Salvation Army is one of the largest service organizations in the world. Across the United States, 35,000 officers, 60,000 staff members, and 3.5 million volunteers extend compassion to our fellow Americans. At Christmastime, when there's a Red Kettle on every corner, it seems like there are 10 million more. (Laughter.) 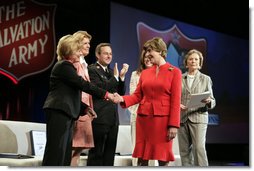 For 150 years, the good men and women of the Army have served their neighbors in need. After September 11th, the Salvation Army was at Ground Zero, helping those families who had lost. In Kansas, you brought much needed relief after tornadoes uprooted whole communities. In North Carolina, through the NightWatch program, you've provided food, clothes and companionship to the homeless. In Ohio, through the Harbor House Treatment Center, you've given substance abusers a second chance for healthy lives. Just last week, you brought meals and comfort to law enforcement officers responding to the tragedy at Virginia Tech.

Through each of these ministries, you're answering the Salvation Army's call to be a "shelter in the storm." And on the Gulf Coast, you answered that call literally. Immediately after Hurricane Katrina, the Salvation Army was there, offering victims kindness and relief. I saw the Salvation Army in action at the Yankie Stadium Relief Center in Biloxi, Mississippi. There, volunteers provided medical care to the injured, and distributed food and clothing to people who had lost everything.

At the center, I met the man who led these efforts, Captain Zach Bell. Captain Bell says his time on the Gulf Coast was a powerful reminder of why our country needs the Salvation Army. He'll always remember Isaiah, a four-year-old boy who came to the shelter every day with his mom. Amid the devastation, the Salvation Army Center was a place for Isaiah to get meals and snacks, to run around, to just be a normal kid. This family was determined to stay in Mississippi, Captain Bell says, "and to rebuild their lives there." With help from the Salvation Army, Isaiah and his mother did stay in Mississippi, and today they're rebuilding their lives and a new home at D'Iberville. Captain Zach Bell is here in the audience. (Applause.)

On the continent of Africa, Salvation Army staff members and affiliates are implementing the WORTH program in Tanzania, Kenya and Uganda, working with USAID. The WORTH program helps women in African villages start private banks, which lend and receive micro-credit. Women use these resources to launch their own small businesses, stimulating local economies and providing these women with help for themselves and their families.

With their newfound independence, women address the other challenges facing their communities -- like the lack of education, and the spread of HIV/AIDS. One of these women is Alexanderena Nanzala, a 60-year-old WORTH participant from Uganda. Alexanderena's son died from AIDS, and his wife left their village. Alexanderena was left to care for all eight of her grandchildren, without a source of income or the education to find a job. But with help from a WORTH loan, this grandmother opened a canteen in her village, which has helped provide for her family.

Alexanderena also drew strength from her fellow WORTH participants. The women encourage each other to keep saving, and to get an education. After literacy classes, Alexanderena now proudly writes her name. And she's making sure all of her grandchildren go to school. I'd like to thank the Salvation Army for supporting the WORTH program, and for working to help women and young people in Africa. (Applause.)

Helping young people everywhere is an integral part of the Salvation Army's mission. Across the United States, caring "Sallies" take an active interest in the lives of young people, showing them that adults care for them, respect them, and believe in them.

Helping young people build the knowledge and the self-respect they need to lead successful lives is at the heart of Helping America's Youth. President Bush announced the Helping America's Youth Initiative in his 2005 State of the Union address, and he asked me to lead it. So over the last two years, I've traveled throughout the United States, visiting with young people and with the adults who are so important to their lives. I've been to schools and to after-school programs. I've met with mentors and Big Brothers and Big Sisters. I visited a sports program in Detroit, a debate program in Atlanta, and gang intervention programs in Los Angeles and Chicago.

All of these visits led to the White House Conference on Helping America's Youth, where we introduced an online, interactive Community Guide. The guide helps concerned adults learn more about their own communities, like which neighborhoods have the most youth-related problems, and what local resources are available to address these problems. The guide is available at www.helpingamericasyouth.gov -- that's g-o-v. And I encourage each of you to use this guide in your own neighborhoods.

Many of you have worked with young people as part of your service with the Salvation Army. One of these young people is Zack Nunamaker. Zack was 13 when his mom and four siblings checked into the Salvation Army homeless shelter in Kankakee, Illinois. His father was in jail, and the family had nowhere else to go. Zack wasn't happy about the move. He told his mother he'd rather go to jail than go to a shelter. But during his six weeks with the Salvation Army, Zack changed his mind. Zack says, "They were the people who taught me right from wrong -- that the way I was heading was not the way to live."

After his family left the shelter, Zack kept coming back to visit and to help out. Now he plans to be a leader in the Salvation Army, and he hopes to change other young people's lives as caring "Sallies" did for him. (Applause.)

Throughout the United States, members of the Salvation Army are helping their neighbors change their lives. Thanks to each and every one of you for serving your communities and our country. Thank you for building on the Salvation Army's success through this conference, and thank you for showing the compassionate character of America to the world.