For Immediate Release
Office of the First Lady
April 24, 2007

Mrs. Bush's Remarks at the Launch of the President's Africa Education Initiative Video
The Academy for Educational Development
Washington, D.C.

MRS. BUSH: Thank you, Walter, thank you for that very kind introduction. Thank you for the great work that you all do here to make sure children are educated everywhere. I want to recognize, of course, Dr. Sarah Moten, the Chief of the Education Division of USAID. Thank you so much, very much, Dr. Moten. (Applause.) Stephen Moseley is here. He's the President and Chief Executive Officer of the Academy for Educational Development. Thank you very much, Stephen, very much. Thank you for joining us. (Applause.) 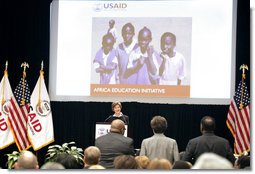 Members of the diplomatic corps, I want to thank all the ambassadors and the different representatives of countries in Africa who have joined us today. And I didn't know there were going to actually be spouses of Cabinet members, but I see Marcia Jackson and Suzanne Nicholson here on the front row. Thank you also for joining us.

I'm so happy to have this chance to talk with you all today about how we can improve education throughout the developing world. Yesterday began UNESCO's Education for All Week -- a time when the world renews its commitment to education. Governments are reminded of their responsibility to invest in the education of its citizens. Leaders are urged to work with their counterparts in other countries to educate global citizens. And all of us are called to help meet UNESCO's goal of giving every child access to a good education by the year 2015.

Education has the power to transform individual lives, as each of us know. It also has the power to transform communities and whole societies -- especially in the developing world. Yet in Africa, 38 million children -- most of them girls -- are not in school. Of those who do enter the first grade, fewer than half of them will complete primary school. Adding to the crisis, of course, is a lack of textbooks and, most important, a lack of qualified teachers.

The United States is proud to partner with African governments to address the challenges of education in their countries. In 2002, our government launched the Africa Education Initiative -- a $600 million investment that will provide 550,000 scholarships to African children, and train more than 900,000 teachers, by 2010.

In its first four years, the initiative has provided more than 250,000 scholarships to children in 40 countries. (Applause.) AEI has distributed nearly 4 million textbooks to classrooms. The program has already helped train more than 600,000 teachers.

I've seen AEI's early success in Ghana, where I visited the Accra Teacher Training College. At the college, we launched AEI's Textbooks and Learning Materials Program. As part of the program, six American universities -- primarily minority-serving universities -- have partnered with six African countries to produce and print and distribute 15 million primary-school textbooks. Representatives from some of these universities are here today, and I'd like to ask them to stand. (Applause.) Thank you all very, very much. Thank you for your dedication to Africa's children. I know this has been a wonderful learning experience at these universities, as well, as these universities have partnered with African countries, to produce Africa-centered textbooks that will really be appropriate and right for the children in these countries.

More than 80 million children will benefit from these classroom resources provided through AEI. Yet the true benefits of the Africa Education Initiative will reach millions more -- as African children who are educated today secure the prosperity and the good health for their societies tomorrow.

Three of these young people are with us this morning: Eunice Kaelo, Evelyn Nkadori, and Agnes Kisai have joined us today.

Eunice, Evelyn, and Agnes are Maasai teenagers from the rural grasslands of Kenya. In their community, education for girls is rare. Most girls stay at home to help with the chores, and many are betrothed and married by the age of 10. Eunice, for example, was unique among her 15 siblings: She's the only one who received an education. Agnes's family had a hard time paying her school fees, and they were almost forced to give her away in early marriage. Evelyn was the only girl from her village to ever complete high school.

These young women made the 8,000-mile journey to begin their studies early in 2005. Before leaving, they were sent off from their villages with a traditional Maasai blessing. For young women, the ceremony usually honors an upcoming marriage. Young men are presented with land, and a warrior's spear -- symbols of how they'll provide for their community, and make the Maasai people proud. But Evelyn, Eunice, and Agnes were presented with a different parting gift. Each of these young women received a pen -- a symbol of how education will help them bring both pride and prosperity to their people.

The "big three" -- as these students are called in their villages -- are the first women in their communities to go to college. They understand that their education begins a new chapter in their lives, but also in the lives of their people. "I am the new face of the Maasai girl," Evelyn explains. And "I'll be a source of hope in my community." Evelyn, Eunice, and Agnes, would you stand, please? (Applause.) Congratulations. And joining them from Chicago State University is the Director of the International Programs study there, Dr. Adama Conteh. Dr. Conteh. (Applause.)

Millions of children can bring renewed hope to their communities through the Africa Education Initiative. Thanks to each and every one of you in this room for supporting this important program. Now, I'd like to tell you more about the great work AEI is doing throughout Africa. I'd like to present a video that was filmed in Kenya, Zambia and Senegal. This video can educate a broad audience about AEI, and encourage leaders from government and the private sector to join this effort.

Thanks to USAID and to the other agencies who produced this video. And thanks to each and every one of you in this room for your commitment to the children of Africa.

Thanks for also joining us, for watching and listening to the video. Now we can roll the tape. (Applause.)