For Immediate Release
Office of the First Lady
April 24, 2007

MRS. BUSH: Thank you all very much, and thank you so much, George, for presenting that wonderful award. I'm thrilled to have it. Thank you, Terri Lee Freeman, for being President of the Community Foundation, and George Vradenburg for being our event chair tonight.

I also want to welcome our ambassadors who have joined us tonight from Afghanistan, from Haiti and Colombia. Thank you so much for being a part of our community, as well. (Applause.) 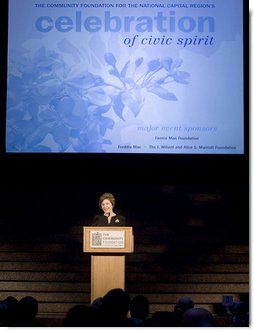 I'm delighted to be with each of you this evening. And I'm especially honored to be here with Robert Linowes, to celebrate the 100th Anniversary of the Linowes Leadership Award. (Applause.) These awards honor our community's "unsung heroes" -- men and women who give generously without expecting to be recognized in return.

Robert and his wife Ada, who's also here, exemplify this quiet service -- even though they have a lot to sing about. Robert and Ada have given their energy to dozens of local community groups. Ada has volunteered with the Red Cross and local art galleries. Robert has served the Boy Scouts and the United Negro College Fund. He's led the Federal City Council, and he helped rescue the Folger Shakespeare Theater -- saving an American cultural icon. Thank you, Robert and Ada, for your excellent service to our community. (Applause.)

One of Robert's greatest achievements has been modernizing philanthropy through the Community Foundation. For thirty years, the Foundation has served the Capital Region by helping compassionate citizens help their neighbors in need.

Guided by the Community Foundation, Washington residents give back to their cities through more than 600 charitable funds. By coordinating the work of these charities, the foundation helps feed the homeless, and care for the sick. Member charities teach children how to read, and boost student achievement in D.C. public schools. Foundation funds spur development in neglected Washington neighborhoods. They brighten the city with community arts programs. They turn a population that hails from many states, and many countries, into one community -- united through service to our city.

I've found that following the lead of my mother-in-law is generally a good idea. (Laughter.) So the Laura Bush Foundation for America's Libraries -- which you just heard about in the video -- is also part of the Community Foundation. In 2001, the Laura Bush Foundation was established to help school libraries expand their collections. Over the last five years, the foundation has awarded more than $3 million in grants to 634 schools across the United States.

Six of these schools are here in the D.C. area. Last year, I visited one of these schools -- Our Lady of Perpetual Help, in Anacostia. There, I met students who told me how much they wanted library books that would educate and entertain them, and they wanted them in time for the next school year.

Books educate and entertain, but they also have the extraordinary power to comfort children, as we've seen, since the devastating storms on the Gulf Coast. In 2005, the Laura Bush Foundation established a special fund to help school libraries across the Gulf Coast build their book and material collections. Since then, the foundation's Gulf Coast School Library Recovery Initiative has awarded about $2.5 million to 54 schools in Mississippi, Louisiana, Florida, and Texas.

And the task of building these school libraries is huge. According to the U.S. Department of Education, more than 1,000 public and private schools in the region were damaged or destroyed. The basic cost of building a solid book collection for an elementary school library is about $50,000. The cost of a good secondary collection is usually over $100,000. Restocking these libraries can help reopen schools, and schools are essential to the recovery that's under way. Until there are schools for children, families can't come home. And we know that young people who have endured trauma heal best when they can go back to their normal routine at their own school.

Last week, I saw two school libraries that are now being rebuilt with the help of the Laura Bush Foundation grants. I visited the New Orleans Charter for Science and Mathematics, and Holy Cross, a Catholic boys' school in the Lower Ninth Ward.

At Holy Cross, I met the school's librarian, Beth Patin, who spoke of how much the school's library means to her boys. After Katrina, they came in every Saturday to help her rebuild. They collected all the materials they could salvage from their old library -- boxing up books, moving out furniture, and clearing out the old school. They helped set up the new library in a trailer, which I toured last Thursday. For students, rebuilding the Holy Cross library literally became a varsity sport: Standout volunteers got "hurricane patches" on their letter jackets.

Even with the boys' hard work, the Holy Cross library has a long way to go. Before Katrina, their collection contained about 50,000 volumes. Now they have about 500. And the eager readers at Holy Cross miss their old collection. The librarian explains that the boys are in the Ninth Ward, where there are trailers everywhere. There are rescue-Xs painted on all the houses. But "one thing that helps," she said, "is when they can escape into books." Last Thursday, Beth got help building Holy Cross's new library with a $50,000 grant from the Laura Bush Foundation.

The Laura Bush Foundation is just one way generous citizens throughout our city extend opportunity and hope to their neighbors. Each of the charities you support represent other ways.

Thanks to each of you for stepping up and serving. Thank you to the Community Foundation for coordinating these efforts. Through your generosity, you're improving the lives of people across our country, and you're representing the compassionate character of our nation.

Thank you very much for coming tonight, and thanks to the Community Foundation for this year's Civic Spirit Award. May God bless you, and may God bless your work for our capital city.