For Immediate Release
Office of the Vice President
April 24, 2007


THE VICE PRESIDENT: I usually avoid press comment when I'm up here, but I felt so strongly about what Senator Reid said in the last couple of days, that I thought it was appropriate that I come out today and make a statement that I think needs to be made.

I thought his speech yesterday was unfortunate, that his comments were uninformed and misleading. Senator Reid has taken many positions on Iraq. He has threatened that if the President vetoes the current pending supplemental legislation, that he will send up Senator Russ Feingold's bill to de-fund Iraq operations altogether. 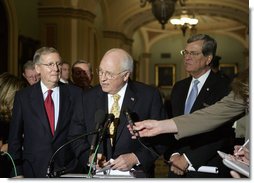 Yet only last November, Senator Reid said there would be no cutoff of funds for the military in Iraq. So in less than six months' time, Senator Reid has gone from pledging full funding for the military, then full funding but with conditions, and then a cutoff of funding -- three positions in five months on the most important foreign policy question facing the nation and our troops.

Yesterday, Senator Reid said the troop surge was against the recommendations of the Iraq Study Group. That is plainly false. The Iraq Study Group report was explicitly favorable toward a troop surge to secure Baghdad. Senator Reid said there should be a regional conference on Iraq. Apparently, he doesn't know that there is going to be one next week. Senator Reid said he doesn't have real substantive meetings with the President. Yet immediately following last week's meeting at the White House, he said, "It was a good exchange; everyone voiced their considered opinion about the war in Iraq."

What's most troubling about Senator Reid's comments yesterday is his defeatism. Indeed, last week, he said the war is already lost. And the timetable legislation that he is now pursuing would guarantee defeat.

Maybe it's a political calculation. Some Democratic leaders seem to believe that blind opposition to the new strategy in Iraq is good politics. Senator Reid himself has said that the war in Iraq will bring his party more seats in the next election. It is cynical to declare that the war is lost because you believe it gives you political advantage. Leaders should make decisions based on the security interests of our country, not on the interests of their political party.