For Immediate Release
Office of the Press Secretary
April 24, 2007

THE PRESIDENT: Good morning. Seventy-eight days ago I sent Congress a request for emergency war funding that our troops urgently need. I made it clear to Democratic leaders on Capitol Hill that I'm willing to discuss our differences on the way forward in Iraq. But I also made it clear our troops should not be caught in the middle of that discussion. 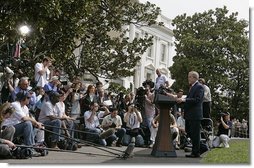 Yesterday, Democratic leaders announced that they plan to send me a bill that will fund our troops only if we agree to handcuff our generals, add billions of dollars in unrelated spending, and begin to pull out of Iraq by an arbitrary date.

I'm disappointed that the Democratic leadership has chosen this course. The bill they announced yesterday includes some of the worst parts of the measures they had earlier passed with narrow majorities in the House and the Senate. They know I'm going to veto a bill containing these provisions, and they know that my veto will be sustained.

But instead of fashioning a bill I could sign, the Democratic leaders chose to further delay funding our troops, and they chose to make a political statement. That's their right. But it is wrong for our troops and it's wrong for our country. To accept the bill proposed by the Democratic leadership would be to accept a policy that directly contradicts the judgment of our military commanders. I strongly believe that the Democrats' proposal would undermine our troops and threaten the safety of the American people here at home. And here is why.

First, a proposal would mandate the withdrawal of American troops beginning as early as July 1st of this year, and no later than October 1st of this year, despite the fact that General Petraeus has not yet received all the reinforcements he needs. It makes no sense to tell the enemy when you start to plan withdrawing. If we were to do so, the enemy would simply mark their calendars and begin plotting how to take over a country when we leave.

We know what could happen next. Just as al Qaeda used Afghanistan as a base to plan attacks of September the 11th, al Qaeda could make Iraq a base to plan even more deadly attacks. The lesson of 9/11 is that allowing terrorists to find a sanctuary anywhere in the world can have deadly consequences on the streets of our own cities. Precipitous withdrawal from Iraq is not a plan to bring peace to the region or to make our people safer at home. Instead, it would embolden our enemies and confirm their belief that America is weak. It could unleash chaos in Iraq that could spread across the entire region. It would be an invitation to the enemy to attack America and our friends around the world. And, ultimately, a precipitous withdrawal would increase the probability that American troops would one day have to return to Iraq and confront an enemy that's even more dangerous. 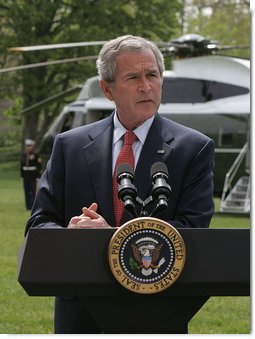 Second, the Democratic leadership's proposal is aimed at restricting the ability of our generals to direct the fight in Iraq. They've imposed legislative mandates, they passed legislative mandates telling them which enemies they can engage and which they cannot. That means our commanders in the middle of a combat zone would have to take fighting directions from legislators 6,000 miles away on Capitol Hill. The result would be a marked advantage for our enemies and a greater danger for our troops.

Third, the bill proposed by Democratic leaders would spend billions of dollars on projects completely unrelated to the war. Proposed legislation does remove some of the most egregious pork barrel projects that Democratic leaders had inserted in earlier bills. Yet it still includes huge amounts of domestic spending that has no place in an emergency war funding bill. We should debate those provisions on their own merits, during the normal process -- but funding for our troops should not be held hostage while that debate unfolds.

I know that Americans have serious concerns about this war. People want our troops to come home, and so do I. But no matter how frustrating the fight can be and no matter how much we wish the war was over, the security of our country depends directly on the outcome in Iraq. The price of giving up there would be paid in American lives for years to come. It would be an unforgivable mistake for leaders in Washington to allow politics and impatience to stand in the way of protecting the American people.

Last November, the American people said they were frustrated and wanted a change in our strategy in Iraq. I listened. Today, General David Petraeus is carrying out a strategy that is dramatically different from our previous course. The American people did not vote for failure, and that is precisely what the Democratic leadership's bill would guarantee.

It's not too late for Congress to do the right thing and to send me a bill that gives our troops and the commanders the funds and flexibility they need. I'm willing to meet with leaders in Congress as many times as it takes to resolve our differences. Yet, if the Democratic leaders insist on using the bill to make a political statement, they will leave me with only one option: I will veto it. And then I'll work with Congress to pass a clean bill that funds our troops without handcuffing our commanders, spending billions of dollars unrelated to the war, and forcing our nation to withdraw on the enemy's terms.