For Immediate Release
Office of the Press Secretary
April 23, 2007

THE PRESIDENT: Thank you all for coming. Today I have been discussing the Medicare Part D reforms that Congress passed and I signed, and that Mike Leavitt and a lot of other people helped to implement.

This reform of Medicare has been a great success. Most importantly, it's been a great success for our senior citizens. The cost of the prescription drug plan has been less than anticipated. The individual stories about people saving money and getting better health care has warmed my heart. 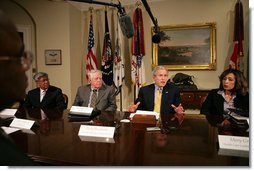 It took a monumental effort by a lot of citizens around the country to make the options that our seniors were given easy to understand. In other words, we reformed Medicare and gave seniors a lot of choices, and it took a lot of loving Americans a lot of time to make these choices available for our senior citizens. Now that the plan is in place, 39 million have signed up for it, drug costs are less than anticipated, and the cost to the taxpayer is about $200 billion less than anticipated.

The lesson is, is that when you trust people to make decisions in their life, when you have competition it is likely you'll get lower price and better quality. It is the spirit of this reform that needs to be now extended to Medicare overall. The trustees report will be coming out today on Social Security and Medicare. It will make clear that senior citizens are in great shape when it comes to the government making their promises. It'll make clear that baby boomers, like me, are in good shape, that the government will meet its promises. But for a younger generation of Americans, it sends yet another warning signal to the United States Congress that now is the time to work to make sure the Social Security is solvent for the future, as is Medicare.

And as we begin to think through solutions for Medicare, we ought to make sure that we remember the principles inherent in this Medicare reform that has worked for well for our seniors -- and that principle is competition works, competition can lower price and improve the quality of people who are a beneficiary of such a plan.

Thank you all very much for coming.