For Immediate Release
Office of the Press Secretary
April 23, 2007

We talked about the neighborhood. As we discussed, the United States wants the people of South America to fully understand we care about their future; that we want there to be prosperity in the region; that we respect leaders who provide basic education and health care. So we had a very constructive conversation. 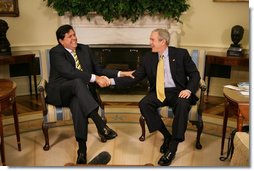 The President is here to urge the Congress, both Republicans and Democrats, to pass the free trade agreement with Peru, and I urge them to vote yes. We talked about our mutual desire to succeed in preventing drugs from coming to the United States and preventing U.S. citizens from using drugs in the first place. The President has got a very clear vision of South America, and I really appreciated his advice and his counsel. It always helps for a person sitting here in the United States to get clarity of what the environment is like.

And finally, I expressed our country's deepest condolence to the student, the Peruvian student who lost his life on the campus at Virginia Tech. And our prayers go to this person's family. And we ask for God's blessings on the family.

Second of all, I am here in the United States to promote the FTA between the United States and Peru. It is vital for our country. It is fundamental to continue this path of growth and social redistribution that we have started in my country. We have achieved an 8 percent annual growth in my country. This year we're expecting a similar growth, 8 percent annually, with 1 percent inflation, which creates more job opportunities.

But this growth, as far as development, needs a greater space and a greater degree of investment, and for that the FTA is essential. It would help us keep and maintain a strong democracy, a democracy that takes care of the poorest and that provides work to the unemployed. It is important to show the world that a democracy, with investment, leads to development. And development is not achieved by becoming static and not opening our doors to the market.

The United States, ever since its founding fathers, has had an ideal, a mission to the world. In the '40s, it sacrificed the lives of many young people to achieve the freedom of the world. Nowadays, we need to focus on democracy and free trade. And I am sure that both Republicans and Democrats would understand that this is key to the mission the United States has for the world.

President Bush and I talked about our contribution to the hemisphere and to humanity, to mankind. And that is the fight against drugs, and the fight against coke. We have started a head-on fight against drug trafficking in my country, against money laundering, and against coca leaf production, by offering farmers alternative crops, which is a way for them to earn a living in a just and legal way.

I have also congratulated President Bush on the very intelligent action he took against North Korea. It could have become a very serious problem for the world had it not been for the tactful intervention by the United States and its allied countries.

In his last trip to Latin America, in spite of some political reactions, which are typical, it has been essential to see the President work with Brazil on ethanol as the new fuel. This will help us refocus on Latin America, which is very favorable for the region.

If President Bush allows me, I am sure that during the time that we will coexist as Presidents he will achieve great things in the world, and he will visit Peru next year. But thank you very much, Mr. President, for the relationship we have of friendship. You are a very nice person, and I'm sure that our relationship will continue to grow.