For Immediate Release
Office of the Press Secretary
April 20, 2007

THE PRESIDENT: Good morning. Thanks; be seated. Welcome to the Roosevelt Room. This morning I have the honor of signing a bill that will help continue our nation's fight against breast and cervical cancer. This bill reauthorizes the National Breast and Cervical Cancer Early Detection Program. I want to thank the Congress for passing this bill. I appreciate you all coming down to witness the signing of this important piece of legislation. 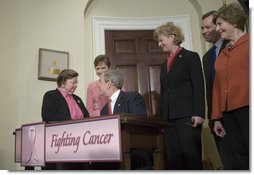 Our family, like many families, has been touched by this issue. Laura's mom, my mother-in-law, Jenna Welch, was diagnosed with breast cancer at the age of 78. She is a fortunate person -- she had surgery, and nine years later she is a cancer survivor, and we are thankful for that. As a result of her mom's battle with cancer, Laura has devoted a lot of time and energy to raising awareness about breast cancer through efforts like the pink ribbon campaign. She managed to get me to wear pink. (Laughter.) I appreciate Laura's good work, and I thank your good work, as well; thank you for joining us.

I want to thank Mike Leavitt, Secretary of Health and Human Services. I appreciate Senator Barbara Mikulski, from Maryland, who is a pioneer in a bill such as this. And, Senator, when you get on an issue -- (laughter) -- you get things done, and we appreciate your leadership.

THE PRESIDENT: I thank Congresswoman Tammy Baldwin, who is a bill sponsor, as well as Congresswoman Sue Myrick; Sue is a cancer survivor. And we appreciate both of your leadership on this issue. I thank members from my administration for joining us, good to see you all.

Early detection allows early intervention and is the best way to increase the chance for survival. Mammograms and pap tests and other screening services can help doctors diagnose cancer before it has a chance to spread. When breast cancer or cervical cancer is caught early, the survival rate is more than 90 percent. Early detection makes treatment more effective, it gives hopes to patients, and it saves lives.

The National Breast and Cervical Cancer Early Detection Program has helped millions of low-income and uninsured women get screened for cancer. This is an effective program. Since its creation, the program has conducted nearly 7 million cancer screenings, it's diagnosed thousands of cases of breast and cervical cancer, and it's helped educate women about the importance of early detection. We expect that in 2007 this program will provide more than 700,000 screenings for low-income and uninsured women. The program is an important part of this nation's fight against cancer, and the bill I'm about to sign will continue this life-saving work.

I appreciate working with the United States Congress to fund breast and cervical cancer research and prevention. The span of my administration, we have spent, along with Congress, $6.7 billion. My budget for 2008 includes another billion dollars for research and prevention activities. We'll continue to work to ensure that every American woman has access to the screenings she needs to detect the cancers in time to treat them.

Again, I want to thank the members of Congress for their hard work and their dedication in passing this important piece of legislation. I appreciate you all joining us to witness the bill signing ceremony. And it's now my honor to sign the National Breast and Cervical Cancer Early Detection Program Reauthorization Act. (Laughter and applause.)